Last night I was privileged to catch a screening of Aquaman a few days before its wider release here in the States. After I left the theater, I called my buddy Kyle and told him that I needed to say something to him that I thought I’d never say:

(Side note: His wife thought I was calling to ask him to bail me out of jail, and I’m not sure how I feel about that.)

Aquaman is downright gorgeous, yo. DC finally realized that there are more colors in our visual spectrum besides blacks and grays. Even the colors on the more recent suits and getups of their universe’s biggest heroes were muted and darkened compared to the usual comic book renditions. Not so with Aquaman. They 100% embrace the vivid gold and green of his iconic look, and it is glorious.

The underwater scenes (and they are numerous, of course) are particularly eye-appeasing. From the subtle motion of beards in the underwater currents to the bright colors of corrals and creatures, your eyes will never grow bored.

And they also put quite a lot of work into the look of Atlantean technology. All of their vehicles are fish derivatives like eels, whales, and skates, for example–which is totally sensible. Evolution has crafted those creatures’ perfect design for that environment; why deviate from that? It is more than a cheesy aesthetic choice! And when you’re in the undersea cities, it’ll feel like you’re watching a Disney movie, not a DC movie. I totally dug that.

The only look I didn’t particularly care for was the design of the Atlantean battle armor. They looked like mini-Jaeger’s and were a bit bulky relative to every other costume featured.

Aquaman’s story is cogent. Nothing felt out of place or superfluous. Even the B Plot involving Black Manta played a much larger role in the A Plot. He wasn’t just some 10 minute villain; his subplot majorly affects Aquaman’s understanding of himself as a hero (or not).

Aquaman is a reluctant hero at first. All of this heroism is just making him late for his next beer. If he had his druthers, he’d stick to the surface and live a mostly mundane life. He’s disillusioned with Atlantis and his connections to it, including his familial ties. But he’s pulled into the plot because his brother, Orm, is allying the various undersea nations to attack the surface world; the place that Aquaman considers his home.

Eventually the plot takes a National Treasure twist, and Aquaman and Mera undertake a scavenger hunt-esque journey to reclaim a lost relic of Atlantis: King Atlan’s trident. Aquaman soon discovers that much he considered to be legend or fairy tale is very real, indeed!

I will say this…the writers borrowed a concept from another recent DC film for the resolution of a climactic plot point, and that did frustrate me a bit. Aquaman totally does it better than the other movie (by, like, 1000%), but it really did feel like DC was trying to redeem their previous use of a dumb device and its poor execution. I can’t say more without spoiling things, but after you watch Aquaman yourself, hit me up on Twitter and we’ll dish.

Aquaman barely lets you catch your breath between action sequences. Rooftop fights, underwater duels, aquatic vehicle chases, massive army battles…it just keeps coming and coming. But it comes with variety, which is great.  Very few of the action sequences feel the same. There is even one at The Trench that has a very distinct horror movie vibe to it (and has maybe my favorite visuals in the entire movie centering on the creative use of flare light!).

But in the midst of all this action, there is plenty of dialogue-dependent plot development. Maybe one of the most important things Aquaman does to make its action sequences really pop and matter is keep those dialogue scenes from feeling like they ramble. They are of obvious importance, so it is not as if they’re phoned in or rushed, they’re just concise.

I had a professor in college who only wanted 3-5 page papers with absolutely no wasted space. “Get in, satisfy, get out. Don’t waste my time.”

Aquaman passes that rubric when it comes to the politicking and exposition dump scenes, and as a result the action sequences are sensible and don’t feel like the directors are just smashing action figures together because it’s fun.

Easily the funniest DC movie to date. Aquaman felt like Thor: Ragnarok on both the humor and visual front, and that is about the highest compliment I could pay it, really. Jason Momoa’s comedic timing and delivery is incredible, and the writers did a fantastic job of keeping things punchy without it drifting too far into the comedy genre.

5 The Embrace of the Comic Book Medium

One of the things I loved about Guardians of the Galaxy Vol. 2 was the fact that it screamed comic book. It didn’t just borrow concepts and characters, it had a bonkers comic book plot involving a sentient planet and it was great. Aquaman felt the same way to me. It didn’t shy away from crazy concepts or try to make them make too much sense. Sometimes movies based on comic books just try a little too hard to explain every little thing so that it could conceivably have taken place in our actual world. Aquaman has none of that.

There’s a crazy stormy vortex thingy at the ocean floor that transports you to the earth’s core somehow and there are dinosaurs there. Atlantis is a thriving civilization that has been around for centuries and is still regarded overwhelmingly as a fairy tale. Deal with it. Take these things as read and enjoy the story that assumes them! 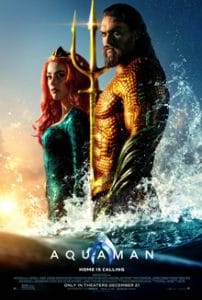 I’m going to shock some by saying right here, on record, that Aquaman is a better movie than some in the MCU. And I’m not just talking about Iron Man 2 (that wouldn’t be a crazy claim). I’d rank it above all of the DC movies since Nolan’s The Dark Knight, for sure.

As far as Marvel movies go?  Well, I’m not looking to start a fight, so I won’t comment. But I will say this: You will leave the theater struggling to figure out which of the best of the MCU it outshines…

And that is the greatest achievement of Aquaman: It brings DC back into that “best of” conversation.

Nerd Obsession: Knowing G.I. JOE is Half the Battle