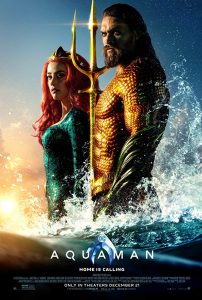 When EarthNerd Adkins posted his glowing review of Aquaman after having gotten a preview of it, I was still skeptical. The DC Comics movie making machine hasn’t given us much to inspire confidence that they know what they are doing, especially with the very dangerous Guy Who Talks with Fishes. (Can you imagine if Marvel’s fourth film had been Doctor Strange? This is the similar kind of risk.)

And I have to say, this movie rises or falls on the clear idea that it knows what it is. To put it in the simplest terms possible: “How do you feel about an octopus smacking away on a drum kit?” and the answer you give will give you an idea of how you will feel about this film.

Aquaman knows it is an epic. So, not to dissuade your upcoming all day New Year’s showing of the Lord of the Rings films, but the epic movie is something that we don’t get to see too much anymore. To put together a world at the scale and sense that makes the stakes feel epic is hard work on a filmmaker.

But that sense of large scale world building and creation is present in this movie to the point that the superhero part gets sidelined, in a good way. And that epic-ness reminds us of a different era of filmmaking. Honestly, the Aquaman story comes closest to the Thor story in the Marvel universe and the set-up done in this movie is much, much better than the set-up done in the first Thor movie. Grand scale on a huge canvas and it works well. 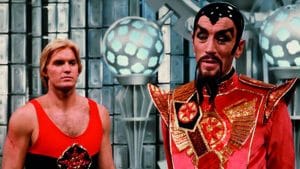 Aquaman is quasi-1980s filmmaking. When you say you want to compare this film to the epic films of the 1980s, you run into the issues that are going to arise when people assume that you want to compare it to Raiders of the Lost Ark or the first Star Wars trilogy.

But Aquaman isn’t the kind of 1980s film that this welcomes comparison to. I left thinking this film has two grandfathers in its DNA: Flash Gordon and Clash of the Titans. Arthur Curry is essentially given the Flash Gordon role; he is dropped into a strange new world and gives the audience to see it all in a new way, though admittedly less so thanks to the training montages from his youth.

His perspective and humor are part of what helps sell the audience believability in the epic that is Aquaman the film. Part of what can make such epic world building work is giving a major character the seat which the audience can put itself into and experience with the character. Aquaman does a sneaky good job of this. 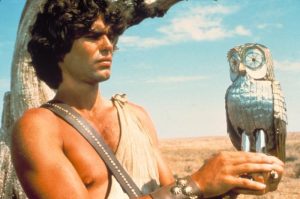 The Clash of the Titans is a grandfather to this film as well because of the epic-ness and scope of it all. Titans has the advantage of being based, in some part, on mythologies that we as a Western civilization largely embrace and study.

The whole Atlantis backstory in this film is made up and, at times, a bit confusing; it is mythology that we don’t know or have heard of. But that confusion is sidelined with a sense of “just go with it” that makes the film sing. Like the way we just track along with Perseus in Titans, we are alongside Arthur Curry for his journey as he moves down his hero’s journey to be king or to not be king.

There are some other parts of the movie that deserve praise. There are attempts at humor but it isn’t over the top. As CGI as part of this movie is, there is a hot take of Aquaman having a squid companion who talks and tries to Rocket Raccoon this flick and thanks heavens that they were smart enough to not do that. Sassy Sally Squid would not have served this movie well.

The fight sequences are epic and yet easy to understand; I particularly enjoyed realizing that they had sharks with frickin’ lasers and want to hear a Dr. Evil commentary track in the future. Nicole Kidman in particular has one tremendously well done fight early on in the film that is an excellent use of technology to create what seems like one long, complicated shot that covers the whole film.

Overall, Aquaman is the second best DCEU movie since the Dark Knight series. While it doesn’t rise to the compelling story of Wonder Woman, it does do a great job of providing a 1980s like hero’s journey as the lead character moves from being a normal guy into the role as the leader of the ocean world. That is happens to be the same story as the DC Comics superhero Aquaman is just a secondary blessing.

The 2018 Nerds on Earth Wrap-Up Report, Including Our 10 Most Popular Articles