By The Bullpen On Dec 28, 2018 Last updated Dec 13, 2018
Share TwitterReddItPinterestFacebookEmailPrint

Our category today is “Best Indie Comic,” and what a year for comics it has been.

This year’s slate was super impressive (pun totally intended), but we narrowed it down to four before opening the vote to determine the winner of the Nerdie Award for Best Indie Comic, namely anything not from Marvel or DC. Basically, we’re talking about creator-owned type titles here and the slate is great.

The Pevensies defeated the White Witch, Harry Potter stopped He-Who-Must-Not-Be-Named, and Dorothy Gale put the kibosh on the Wicked Witch’s plans but do you ever wonder what happened to them after that?

On his 8th birthday, Mikey Rhodes falls through a portal to the world of Terrenos where he is destined to defeat an ancient evil. Now years later, an adult man shows up claiming to be Mikey having succeeded in his quest and returned to Earth. But if, as he says, his story really is done; what does the Chosen One have planned next? – Davery

After the wild success of The Walking Dead, Robert Kirkman has a target on his back. Every new project that has his name attached will also carry the same expectations for success that The Walking Dead has.

But what if you begin a story and when you read it you are met with the same sense of enthusiasm? What if you read a couple issues of Oblivion Song and you think, “This is good, really good. I’m super excited to learn what the next issue brings!“?

Oblivion Song is good. Yet, I don’t wan to venture into spoiler territory. Let’s just say that it has a sense of imagination coupled with heart-wrenching characters moments and issue-ending cliffhangers that makes you want to devour the next issue immediately.

Now, when will AMC pick up the rights?  – Clave

Seven to Eternity is this year’s best fantasy Sci-Fi comic from Image Comics. Hear me out.

Seven to Eternity is a completely self-contained universe with its own lore and characters. Every character has an incredibly unique presence and power. The antagonist, the God of Whispers, is ruthless and written so well you will learn to love him. The main character, Adam Osidis, is a terminally ill man with an incredibly difficult decision to make. Would you save yourself, your family, or the world? Find out the choice in Seven to Eternity!

Set in the semi-apocalyptic dictatorial society of Zhal, you will find all sorts of mystery and madness. Written by the talented Rick Remender, Seven to Eternity was not a 2018 comic that you wanted to miss!  – Adam

But the 2018 Nerdie Award winner for Best Independent Comic is… 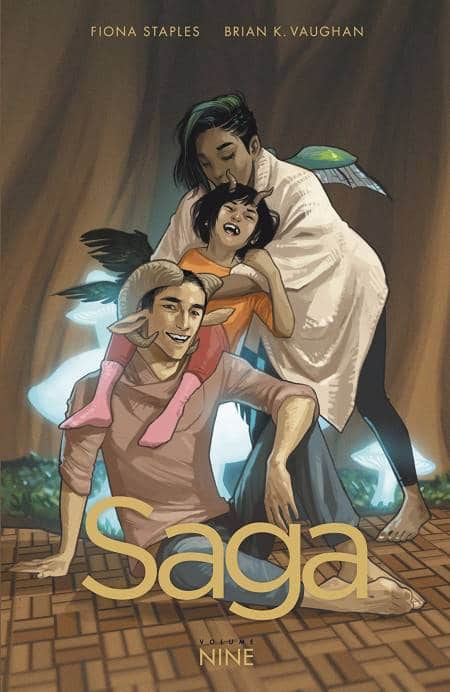 What is there left to say about a comic book like Saga by Brian K. Vaughn and Fiona Staples? The space-fantasy book from Image has won every imaginable award a comic book could possibly win. Saga has won Eisners, Harveys, a Hugo, and everything else in between. Now, Nerds on Earth bestows Saga with its highest honor yet, our indie book of the year.

Though only six issues were published in 2018, it’s hard to imagine any book from any company that published a full schedule this past year would have been as impactful as the latest arc of Saga. Vaughn and Staples inject this series with so much humor, passion, and authenticity that when tragedy strikes, as it frequently does, it’s crushing. No spoilers here, but the ending of this arc was shocking and sad for Saga readers.

In a medium where Marvel and DC cheapen character death on a near weekly basis, Saga drives home its deep focus on characterization by keeping the stakes high. Every character stays with you. Every death matters. This last one was devastating. And now we fans have to wait for what’s next with at least a year-long intermission. No Saga for a year, but we fans will need that time to recover. I doubt we ever will.