By Ross Hardy On May 26, 2016 Last updated May 25, 2016
Share TwitterReddItPinterestFacebookEmailPrint

The big news in the world of comics right now isn’t DC’s Rebirth or how Marvel is wrecking Captain America; it’s Comixology’s new “Unlimited” feature, a subscription-based service (currently $5.99/month) that allows you to “borrow,” and subsequently download, selected titles from different publishers.

This puts Comixology Unlimited in the company of Marvel’s subscription service, also called “Unlimited,” which is functionally the same; for a flat monthly fee, you can read as many comics as you want.

This is unquestionably big news, but it comes with a few caveats:

So, all that being said, there’s still a ton of content to keep nerds like us busy for weeks. But for those of you who aren’t sure where to jump in, we’re here with a quick and handy guide!

Comixology Unlimited: What You Should Be Reading 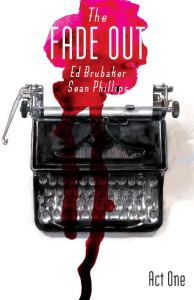 Three of his highest profile titles are on Unlimited, as well as Criminal: Coward and Scene of the Crime. Brubaker and Phillps are a nigh-unstoppable team, and this is some of their best work. 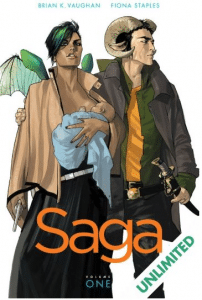 For those of you who haven’t read Saga yet, I have one question: how are you getting internet in that cave you’re living in? Saga is not only one of the most commercially and critically-acclaimed comics of this generation, it’s also one of the best, period.

Eric Powell’s brilliant Nothing But Misery (the first volume of The Goon) and John Layman’s surprise hit Chew are also available, and really, if you haven’t read any of these by now, I’m genuinely curious as to what you’re doing that’s keeping you so busy. Are you in the Peace Corps? On the Moon? The Moon Corps? Anyway, do yourself a favor, and read Saga. 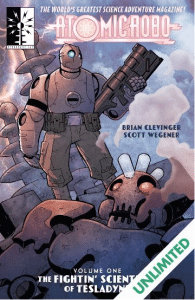 Look, I’m not putting Atomic Robo before Hellboy on the list just so Brian Clevenger will finally notice me. I mean, that’s a reason, but not the reason. Really these are going to be where you get your money’s worth, at least until Comixology digs a little bit deeper into the back catalog.

While most titles on this list only have the first story arc, Atomic Robo, Hellboy, and BPRD have an absurd 11 volumes worth of comics between them. Even if these weren’t some of the most fun comics you could read, that’d be a fantastic deal. As it is, it’s worth the price of the subscription.

What You Want: Violent 1940s pulp stories with morally ambiguous antiheroes.
What You Should Read: Well that’s…oddly specific, but here you go! The Shadow (Garth Ennis & Aaron Campbell, 2012) 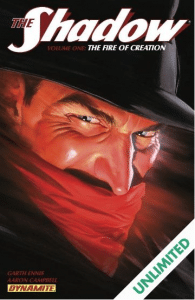 The Shadow is perfect for Garth Ennis. It lets him indulge his fascination with World War Two and gives him an opportunity to write scenes of tremendous violence. When most people talk about Ennis, they talk about Preacher, Hit Man, or even The Boys, but Fire of Creation deserves to be in that same conversation. If you like pulp-inspired stories, CU also has plenty of Dark Horse’s Conan and Red Sonja.

What You Want: Brain-melting, gorgeous science fiction
What You Should Read: The Incal (Alejandro Jodorowsky & Moebius, 1981) 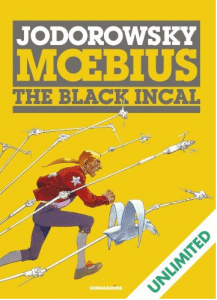 Laura Hudson once called The Incal “a strange, dazzling world,” and that’s accurate, in the same way as saying that The Atomic Knights is a little strange. It’s mind-bending, both in scope and spectacle, a surreal fantasy world of good and evil, talking birds, and all powerful tetrahedrons. There’s a lot more to it than that, but any more will just be confusing. I don’t want to say that you can’t call yourself a fan of comics if you haven’t read The Incal, but I will say that I’ve never met anyone who’s had anything bad to say about it.

There are literally thousands of pages available on Comixology Unlimited, but these are good places to start. Hopefully in the coming months, the amount of available titles will swell. When that happens, we’ll do this again.