It’s no secret that here at Nerds On Earth, we’re big comic fans. And even though Marvel and DC dominate the sales market (with some pretty great books!) most of the diamonds from Diamond are from the smaller, independent publishers. We’ve got our pick for the best indie book of 2016, but first, here are the three runner’s up.

Atomic Robo and the Temple of Od, by Brian Clevinger and Scott Wegner 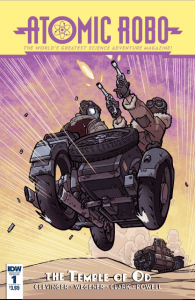 I’ve let my affection for Atomic Robo be known in the past, so I’ll not go into too much detail here, save to say that it is never too late to start reading the adventures of everyone’s pants-wearing, Nazi-hunting, dinosaur-punching robot scientist.

This volume (which, like all other Atomic Robo stories, is a standalone tale, although this one does have one or two significant callbacks to other issues) takes place in China during World War Two, and follows Robo and a handful of allies trying to disrupt a Japanese experiment from destroying the world. There are huge gunfights, tank chases, bandits, and at least one desperate scheme.

To say that it’s “as good” as all the other work Clevinger & Wegner might sound like faint praise, until you realize what a high bar they continue to set for themselves. 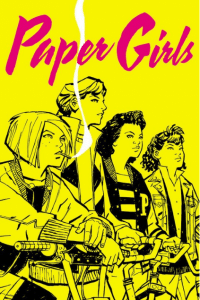 Paper Girls starts out in a way that should be familiar to anyone who’s seen a Spielberg movie, with its plucky teen heroes and a mystery from the stars. But it quickly becomes something that’s both more sinister and more introspective, touching primarily on themes of adulthood and nostalgia.

Vaughan’s dialogue and character work is as sharp as ever in Paper Girls, and Chiang is at the top of his game rendering the aliens and monsters that menace the eponymous foursome. The story takes far too many twists and turns for me to even attempt to summarize here–I’ll just say that, true to form, Vaughan is able to craft a story that never goes where you expect it to.

Rick Remender can do very little wrong, so when it was announced he was going to be working on a science-fiction story with Sean Murphy, the mind behind Punk Rock Jesus, lots of people were excited, and the pair didn’t disappoint.

Focused intently on our contemporary obsession (read: addiction) with technology, Tokyo Ghost is a hyperkinetic, bursting book. Remender works with subtlety and skill, drawing us into the lives of our two heroes, Debbie Decay and Led Dent, with Murphy’s art, as always, offering a brilliant look into a world that’s both plausible and utterly alien. 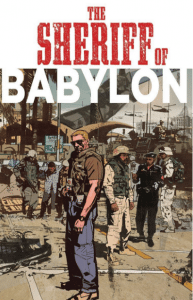 Sherriff of Babylon by Tom King and Mitch Gerads

Bagdad in 2004 doesn’t seem like the most obvious setting for a comic book, but Tom King (who apparently was an actual CIA agent) does a great job of drawing the reader into this contemporary mystery. Sherriff of Babylon starts with Christopher, a military contractor tasked with training Iraqis to be police officers. Then people start dying.

Crime dramas can be done poorly or they can be done well, and Sherriff of Babylon, aided by Mitch Gerads’ tremendous artwork, most certainly does it well. The nontraditional setting, the compelling mystery, and the terrific imagery made Sherriff of Babylon a lock for the 2016 Nerdie for Best Independent Comic Book!

That’s all for us, readers–sound off in the comments below for your choices for the best book of 2016!

Comixology Unlimited: A Primer to Get You Started Reading…