If you’re a J.R.R. Tolkien aficionado, then you’re probably already aware that he was a scholar of medieval literature and language first, and an author second. Outside of his fiction writings, his most famous published works are a translation of the medieval epic poem Sir Gawain and the Green Knight, and two works surrounding the grandfather of all medieval English epics, Beowulf – a translation with commentary, and an essay on its textual criticism.

Being the general nerd that I am, this all interests me. And being the super Tolkien nerd that I am, this super interests me. So imagine my delight when I was given the opportunity to read and review an advanced copy of the upcoming Beowulf graphic novel adaptation from Image Comics. It’s actually an English translation of a previous work from Santiago Garcia and David Rubin, but the point stands.

But before we talk about the graphic novel itself, let’s review the story of Beowulf for those of you who aren’t medieval literature nuts, or didn’t have a particularly mean English teacher in high school.

The Saga of Beowulf

Beowulf opens on Heorot, the mighty mead hall of Hrothgar, king of the Danes. The Danes are mighty, and should be enjoying their victories with drink and reveling each night, except for the fact that every night a monster named Grendel comes and devours one of their number.

Beowulf, hero of the Geats, arrives with a small band of men to aid Hrothgar and kill Grendel. That night Grendel arrives and Beowulf springs his trap. He and Grendel grapple (Beowulf has refused to use a sword because he heard that Grendel doesn’t use one and he wants to test himself against Grendel without advantage), and the fight ends with Beowulf ripping Grendel’s arm off. Mortally wounded, Grendel flees Heorot and returns to his home to die.

Hrothgar and his men celebrate along with Beowulf’s, until the following night when Grendel’s mother (an even more fearsome monster, apparently) comes to Heorot to avenger her son, killing Hrothgar’s most loyal warrior. Hrothgar, Beowulf, and their men track Grendel’s mother to her lair under a lake. Beowulf dives in alone with a sword to find and kill her. He finds the cavern where she lives and fights her, but his sword will not pierce her hide. Beowulf finds the sword of a giant lying around and with his mighty strength uses it to kill Grendel’s mother. He then finds the dead body of Grendel and cuts off the monster’s head to be a trophy in Heorot.

Later in life, Beowulf has been made king of the Geats. Fifty years after his battles with Grendel and Grendel’s mother, a dragon awakes in the kingdom of the Geats and causes great destruction. Beowulf, in his old age, sets out with a few men to kill the dragon. When they arrive, Beowulf tells his men to wait behind while he kills the dragon alone. Most of his men flee upon seeing the terrible dragon except for Wiglaf, whose love for Beowulf trumps his fear of the dragon. The two kill the dragon, but Beowulf is fatally wounded. After his death, he is ritually burned on a mound, and a barrow is built in his memory.

How does Beowulf translate to graphic novel form? 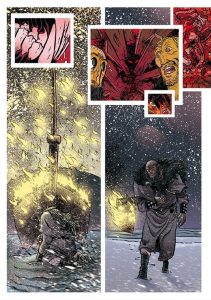 On the whole, it translates pretty well, and that is saying a lot. There’s something about medieval literature, and perhaps Beowulf in particular, that makes it difficult to translate into visual mediums. For instance, there’s not really a physical description of Grendel outside of the fact that he’s quick and strong, and has claws. There is also not a physical description of Beowulf himself, but only remarks about his personality, drive, and deeds. I think this is the reason why every movie version of Beowulf (with the notable exception of Antonio Banderas’ The 13th Warrior, which is a very roundabout Beowulf adaptation, and is fantastic IMHO…) is a flop.

But the Beowulf graphic novel manages to strike what I found to be a workable medium between moving the story forward through spoken dialogue (of which there is plenty) and showing the action (of which there is even more than you could possibly imagine in the original poem).

In fact, I think the biggest weakness of Image Comics’ Beowulf is the biggest weakness of the medium itself – it is tremendously hard to fit large chunks of monologue and dialogue into a graphic novel, and equally as hard to show 200+ lines of descriptive poetry in a visual format. Garcia and Rubin manage to do as great a job of this as I think you could, given the source material.

A Preview of Beowulf from Image Comics: Conclusion 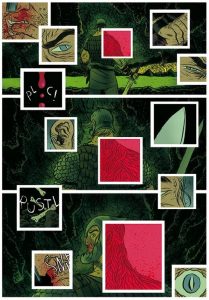 The visual style is dark and muted, except for the blood, which helps to accentuate how horrible and violent the story is. The human characters look typically Viking/Nordic, but with occasional facial expressions that stray near to anime territory in terms of eye-to-pupil ratio. I found it rather difficult to pin down exactly what the monsters and the dragon looked like, but I think that was probably a stylistic choice on the part of the artist based on the lack of description in the text itself.

The beauty of things recorded in words or images is that we can consume them again and again. The best works get better with each re-reading or re-watching, and I think that this adaptation of Beowulf will fall into that category for most people.

You can check it out for yourself from Image Comics.