Welcome back to another edition of my insane 90s summer reading challenge. Each week, I pick a book that I read during the decade of dot com, presidential interns, and grunge rock to reread. It’s sometimes pleasurable. Often not.

This week’s book is the original Shadowhawk miniseries from 1992. That’s right, I did read something besides Marvel in middle and high school, but not much! I took to Image because all of their characters were basically ripoffs of Marvel and DC characters, but edgier. It was the 90s. Edgier was better. It was extreme!

So why am I reviewing Shadowhawk and not some lame Marvel book like Quasar, Avengers, or Excalibur? (Address all hate mail to Clave Jones) 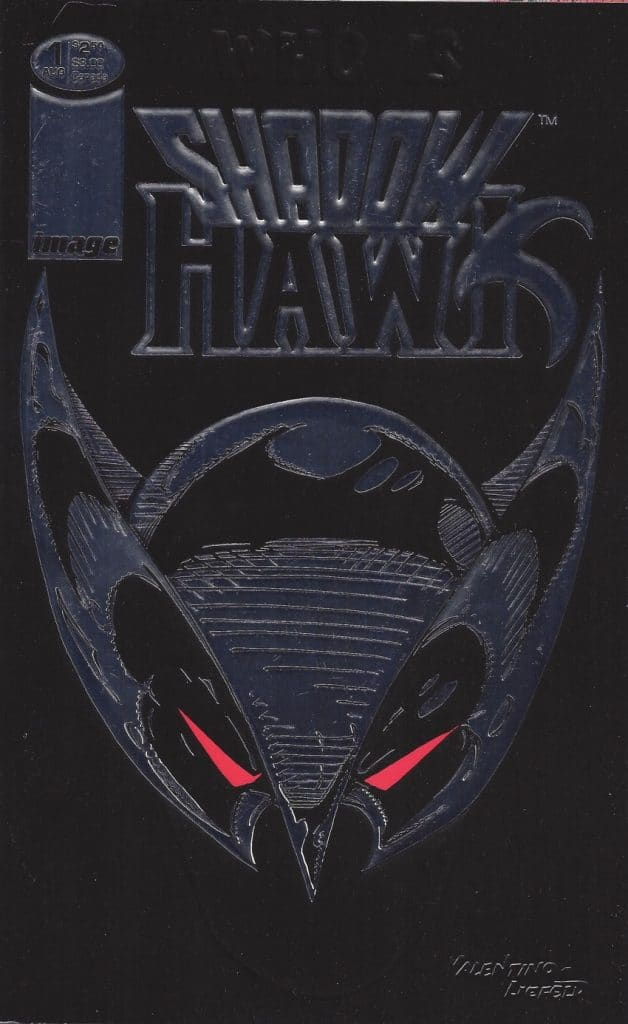 Just look at that cover! LOOK AT IT, DAMN YOU! It had the same impact on me several weeks ago that it did when I first saw it on the shelf. It’s silver armored Wolverine! Silver foil! On a comic book! SILVER! FOIL!

As I thumbed through my collection, the silver enhanced cover stupefied me. I could not resist its siren call. It called to me and said, “Read me, Brandon, for I am extreme.” I would be further stupefied after reading it again.

But I still love that cover!

Shadowhawk was created by Jim Valentino, who also wrote and drew the miniseries at hand. The character appeared in a backup of Youngbloods #2 that, if memory serves me correctly, is also the first appearance of Prophet. I’m not even Googling that to confirm. Nail me in the Facebook comments if I am wrong.   [LINK]

Oy vey. This one is a doozy.   Let’s first talk about my perceptions and remembrances of the book from back in middle/high school. I read the first three miniseries that were released. Like a really terrible action flick, this bad boy had sequels.

The big take away that I have of Shadowhawk from that time was that he was the superhero with AIDS. Though it’s not explicitly mentioned in the first miniseries, this was both a draw and an ick-factor for the book.   I don’t remember if it was being advertised by the time this first series ran, but I clearly remember other nerds being divided over the book.

Some were willing to go with it, while others were leery of the AIDS subplot. I don’t recall the whole AIDS subplot being an attempt to educate the youth of America about the disease. It was a hook to sell the book. Shadowhawk was the first hero to have HIV/AIDS. It felt kind of cheap at the time, as it does today. 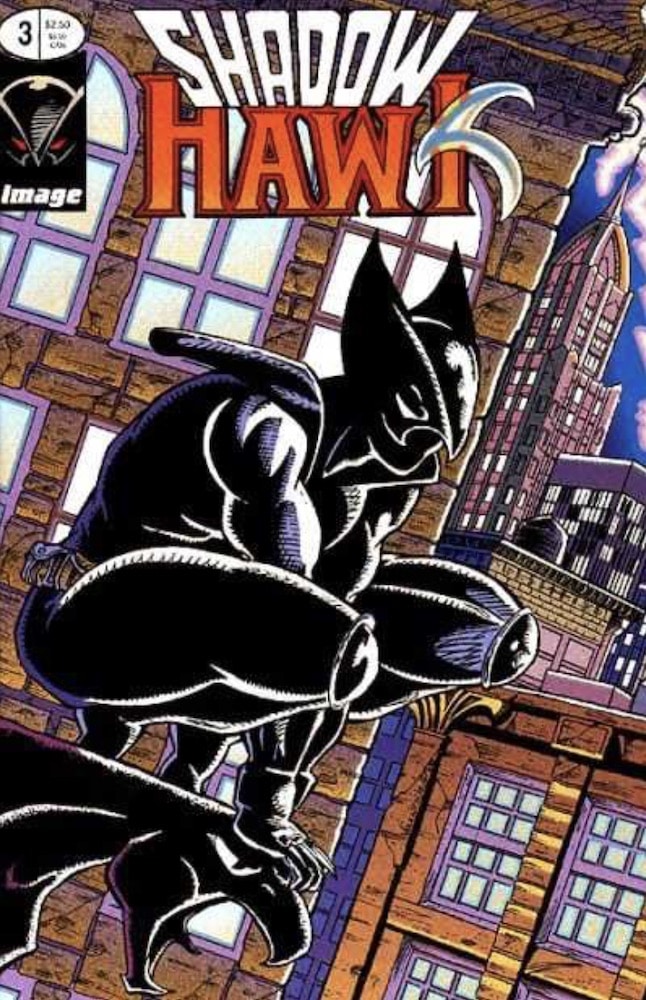 On to the book itself… the amazingly extreme cover squarely puts it out there: Who is Shadowhawk? That’s the big mystery of the entire series. Shadowhawk is presented to the reader only in his silver Wolverine armor.

Much to my surprise, and disappointment, the question wasn’t answered by the end of the fourth issue. Who is Shadowhawk? Find out later. Nothing to see here. Now, git!!!

And it’s not like the story and plot are giving you much to latch onto. Shadowhawk is fighting crime because, as the purple prose of each issue will tell you, he’s going to take back the night!

But from what I read, he’s actually kind of crappy at his job. He routinely shows up after some truly horrible stuff has already happened. However, when he does show up he does his thing: he breaks the bad guy’s back(s)! So hardcore! So extreme!  So Bane!

I guess I should talk about the actual story some. I don’t really want to because it’s terrible. I hope the perfunctory description below reads like a David Lynch fever dream. I literally typed it in one go. Ugh. Here it is:

There’s a lady in a tower. There’s an armored arsonist named Arson. He burns things and makes dad jokes. Tower lady hired him for some reason. Spawn tells Shadowhawk to deal with it. He does. Except Arson transforms into evil human torch. Tower lady sad. Junkie turns into monster/alien junkie. Shadowhawk and Arson fight it. Tower lady recruits more baddies with attitude problems. Savage Dragon shows up to catch Shadowhawk. He fails. Tower Lady tries to recruit Shadowhawk. This bothers Shadowhawk, so he jumps from a window. Tower lady believes he couldn’t survive the fall. Shadowhawk in in a dark room questioning life or something. Angst.

End of miniseries.   I promise you that the above description is better than the actual comic book.

While Image is known for absolutely amazing storytelling these days, the early days of Image were more about the art. Valentino may not have been the best writer, his art was consistently amazing. Just look at his first sketch of Shadowhawk! 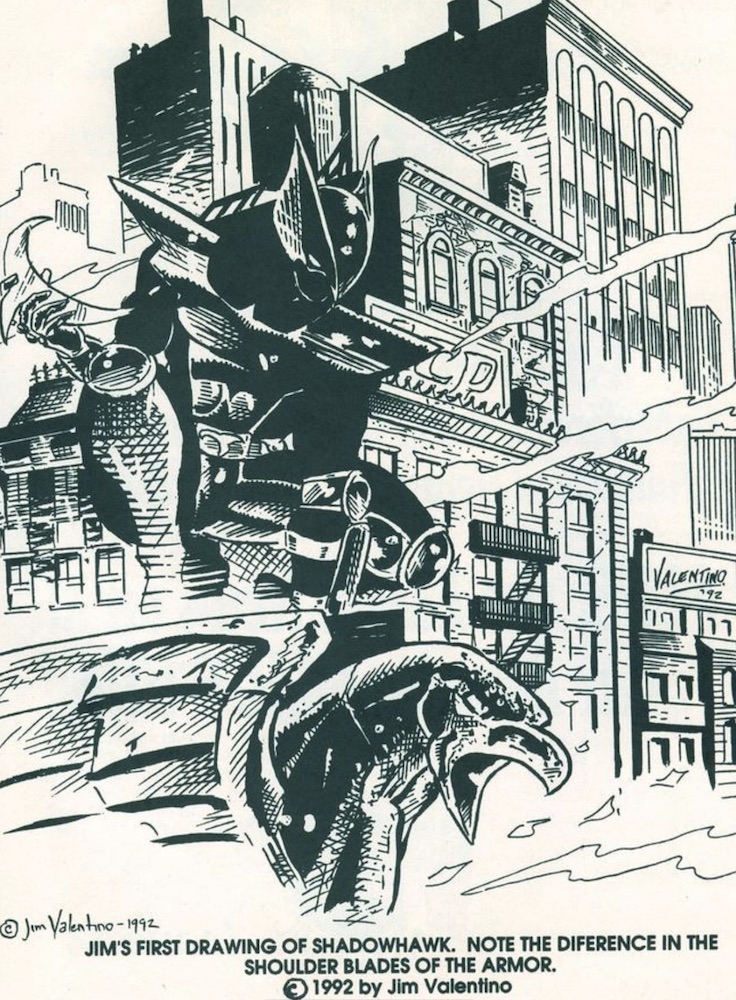 The story might be kind of lame, but the character design is pretty wicked. Again, as a young lad, I took one look at that design and wanted to read it immediately. But let’s take a minute to poke fun at a few things because that’s what I do, apparently.

Have I mentioned how much I love that first issue cover? As gimmicky as the silver foil cover is, it worked at getting my hard earned dollar back in middle school. The second issue was a bit of a letdown.

First off, the gimmicks return, this time with the relatively lowball effort of a wraparound cover. Secondly, there’s nothing epic about it. As cool as Shadowhawk’s design was/is, Arson’s design is a bit too 1990s. He looks like X-O Manowar and one of Rob Liefeld’s flunky, nameless Image creations had a baby while smoking low grade crack and drinking a lot of Old Milwaukee.

And how in the hell did those kids get on a burning roof? Where were their parents? I mean, I know there was some crack and Old Milwaukee just laying around somewhere, but that’s just irresponsible. Yet again, we get to see Shadowhawk doing a great job by showing up after these moron kids ended up on the roof of a burning building.

I don’t know why, but this section from the beginning of issue #2 amused me greatly. Let’s take a peek at the action. 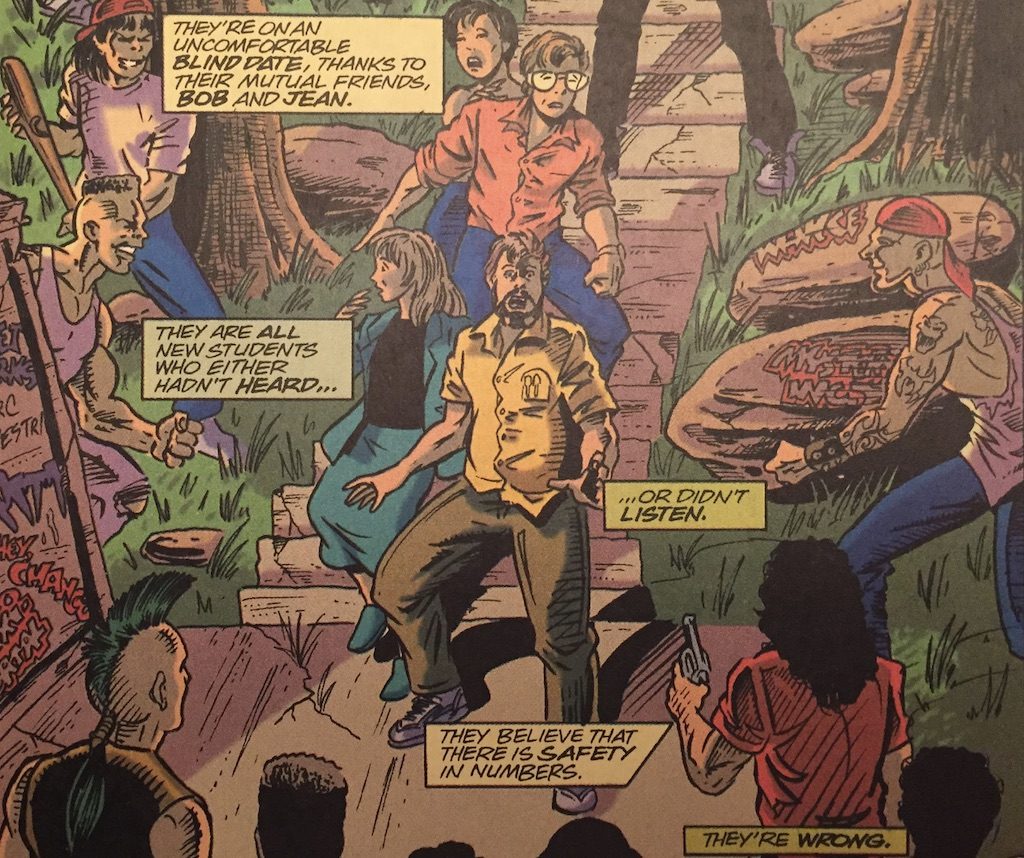 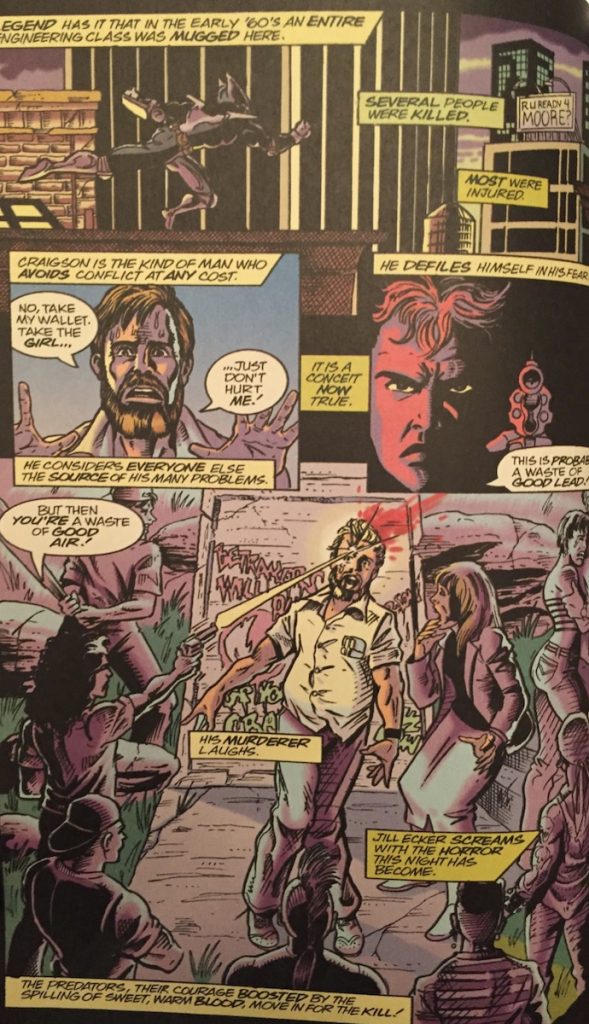 Damn! Things got too real! The guy who was flubbing it with easy Jill Ecker straight up just got shot. DAMN!

Where were you Shadowhawk?

Awww. Way to go, champ! Shadowhawk may not save you from being murdered, but he sure as hell will make sure that the perp that did it will have a broken back the rest of his or her life. EXTREME JUSTICE!

This advertisement made me chuckle. Holy crap, is there a more 90s ad out there? Absolutely no one remembers any of these characters. If they tell you that they do, they are lying. The names of the heroes alone are priceless. Blacklight? Slaughter? Guardd? The Others even double-dipped into characters changing the first letter of their name from ”C” to “K.” Yikes!

Why You Should Check it Out

Well… Um. The first issue has a really awesome cover. I still love it. Not sure if I mentioned that yet. And… Um. It’s cheap. You can definitely find the issues on the cheap in the usual 90s dump bins.

Oh, he was revived during the whole Image United, the debacle of a miniseries that somehow still hasn’t been completed due to Oasis’s Gallagher Brothers-level bickering between the original partners.

But, uh, Shadowhawk was cancelled after five issues due to poor sales. So, yeah.. Kind of apropos. And… Yeah. Wow. This is really hard. That’s all I have to say about that.

Next week, I take a trip to Ultraverse to spend some time with PRIME! See you then!