Speculators are gobbling up issue #1, but is the comic actually any good?

Welcome back to the third installment of “My 90s Summer.” This week, I’m revisiting the first three issues of Marvel’s classic series Darkhawk. Okay, it’s not a classic.

My rules for this summer experiment are fairly simple. I go back and reread a comic book that I read during my formative comic years to see if it holds up. Regardless of my enjoyment, I make fun of it as best as I can.

Now that I have explained the rules, I also have to admit upfront that I am breaking them this time, but just by a little. Confession: I only read three issues of Darkhawk back in the 90s proper. I read issues one, two, and…nine.

Yes, I’m cheating a bit with one because I never read issue three. Why not issue #3? Well, I didn’t like the first two issues of Darkhawk, so I never picked up the third. My favorite character, Punisher, guest stars in issue nine, but Frank Castle was the draw there. And what I saw in that issue wasn’t enough for me to stick around or check out the back issues between where I left off and issue 9. I figure no harm, no foul… but the readers can be the judge of that. 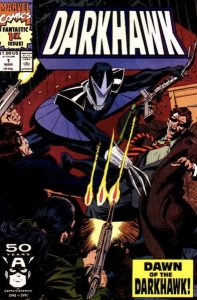 Debuting in March 1991, Darkhawk was a new hero for the modern Marvel Age. Ultimately lasting 53 issues in its original run (including annuals), Darkhawk became primarily a supporting character in the two decades that followed. His title also became a common feature of the dollar bins during that time. Neither beloved nor reviled by the masses, Darkhawk became more of a footnote than a household name. Until more recently…

During the buildup to the second Guardians of the Galaxy film, a Darkhawk action figure / collectable / toy (use whatever term feels appropriate to you) was released during the same wave as action figures related to that movie. Speculators picked up on this and began fanning the rumor flames that the alien-armored hero no one really loved would return, which stoked an interest in picking up Darkhawk #1. This led to a slight price increase. And another increase. And another. Darkhawk #1 was inexplicably lifted from the dollar bin and put on the rack as a top tier book.

The renewed interest was furthered by the insane and mostly tongue-in-cheek attention Darkhawk started to receive on Comic Book Collecting, a Facebook group that boasts over 300,000 members. It’s a little chicken or egg at this point, but the farcical love for Darkhawk by many of its members (of which I am one) drove the price of this perennial dollar bin flunky to some seriously high prices. I recently saw several copies at a few comic shops I visited in early June. The lowest price I saw it for was $50. Holy crappy 90s comics, Batman!

But is it any good? Read on to find out! Or take the shortcut: No.

Darkhawk’s realworld origin is kind of weird. Created by Tom DeFalco and Mike Manely, DeFalco never actually wrote the character. Instead, Danny Fingeroth was the primary writer. Darkhawk follows the violent misadventures of Chris Powell, a teenager who found a mystical amulet-gem that turned him to the armored vigilante Darkhawk.

Unfortunately for Chris, he found this amulet while taking his bratty brothers through a funhouse where, coincidentally, they found their policeman father taking a bribe from a local crime boss. Chris ushers his pesky brothers away and find the amulet that turns him into… Edge-Man!

I kind of like the name Darkhawk, but Edge-Man is pretty legit too. In a pre-Google world that is. I’m sure if you Googled that now… Yikes.

With his father on the run and the criminals responsible for his downfall still out there, Chris swears to use the Darkhawk amulet to bring an edge against crime! Again, do not Google the phrase “bring an edge.”

Of course, the cronies that forced Chris’s dad to be on the take were also in league with Hobgoblin. Which one you ask? I don’t know. I didn’t bother to look into that one too deep. I think there were several bouncing around in the late 1980s and early 1990s. Hobgoblin’s appearance means one thing: Spider-Man! In the 1990s, a title couldn’t be considered official until Spider-Man and/or Wolverine showed up. Spider-Man gets the nod here.

The two heroes forge an alliance to take out Hobgoblin and the forgettable mafiosos that had Chris’s dad on the take. Your usual misunderstanding between heroes follows, as Spider-Man and Darkhawk end up not only NOT catching Hobgoblin, but Darkhawk gets officially lumped into the vigilante category, along with Wolverine and Punisher, by the webhead. Silly heroes, always acting at cross purposes!

As an origin story, Darkhawk is pretty milquetoast. There’s nothing especially unique or engaging about Chris Powell that made me want to read about him back in the early 90s. He’s your stereotypical angsty teen, which I get enough of during the day at my job. Nothing about him screams “hero.”

By the end of the third issue, I felt zero connection the guy or the character Darkhawk. Often times, your first issue needs to answer the question, “Why should I care?” If a comic hasn’t done that in three issue, it’s hard for anyone to get much investment in the story.

No one will ever accuse Darkhawk of being a classic read. The biggest crime is that it’s boring. Nothing in this book ever rose above the level of perfunctory performance. Even when Spider-Man shows up, it has an air of good ol’ Peter Parker just punching in on the time clock. I’m sorry to say that Darkhawk is lame. Really, really lame.

Exhibit A: The Comic I Want to Read, The Fighting Douche Brothers!

The art on Darkhawk was actually pretty good. Stalwart comic artist Mike Manley ably handles the new vigilante, and is credited alongside Tom DeFalco as his co-creator. Manley illustrated a ton of titles in the 1990s, including Zero Hour, Batman, Shazam, and other 90s books.

But the combination of story and art make for some good fun at times.

Chris Powell has two brothers, twins Jason and Jonathan, whom I lovingly would like to dub the Douche Brothers. In these first three issues, these morons get into approximately forty fights with one another. Dare I say that their fisticuffs are more interesting than anything else in the book. I lived for their next fight during my summer rereading.

Watching the Douche Brothers fight it out was exhilarating! I love how in nearly every scene, Chris and the other adults around would just let the two little brats go at each other without much concern. In real life, these two would have killed each other by their sixth birthday.

Nevermind the attention Darkhawk is getting these days, Marvel needs to bring these two kids back and have them kick each other’s ass for several issues. It beats anything out of their Legacy line.

This is part of the disconnect with Chris/Darkhawk. Why did it take three issues to have his friends show up? I get that Chris is kind of a dopey loser, but this is just baffling. Maybe the creators felt sorry and decided to give him some friend so he looked like less of a loser. “Hey, it’s issue three. Let’s make Chris seem more like a real character. Never too late to actually think about publishing a good story! Let’s give him some friends, a girlfriend. You know, people stuff.”

Having read three Marvel books in a row, I am convinced that there had to be a hobo mandate at Marvel in the early 1990s. Darkhawk’s hobo was mystical one. After being accosted by the nameless mafia flunkies who led Chris’s dad down the wrong path, the hobo sends Chris into the funhouse where he will find the amulet that turns him into Edge-Man (don’t Google that). Not to be outdone, the hobo return a few pages after Chris’s first transformation into Edge-Man, giving him his superhero name Darkhawk. Thanks, Marvel-mandated homeless guy!

Darkhawk: Why You Should Check It Out

I have one word for you… SPECULATION! I mean, let’s be honest, there’s a reason Darkhawk never rose to stardom on his own. Trust me, absolutely no one is picking up Darkhawk because it’s an amazing story. Anyone making the case that this needs to be revered in the canon of comic book excellence is trying to convince you to pay top dollar for a book that’s worth only one dollar. The high prices on Darkhawk #1 are very perplexing, but the faux-internet buzz from Comic Book Collecting actually kind of worked. 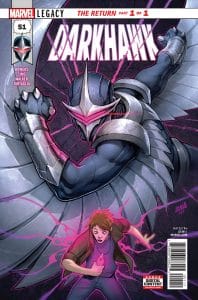 Darkhawk has made a return of late as well. Darkhawk had a 51st issue published as part of the Legacy line of books a few months back. He also has his own Infinity Countdown miniseries out now. Is the speculation-fueled resurgence to blame for this new miniseries? It’s hard to say, but Darkhawk has indeed returned from the ignoble dollar bin… at least the first issue has, anyway.

This past weekend at HeroesCon in Charlotte, I made it my mission to pick up any issues I could find in the dollar bins. I ended up netting enough issues to have a solid run on the title, with issues 1-35 and various odds and ins from the 40s. If Darkhawk were really a hot commodity, I would expect to find more issues on the racks on sellers besides issue one.

When Playing D&D, Use a Paper Character Sheet, at Least Once