Looking Back at 90s Comics: The Mulleted Glory of Venom: Lethal Protector

A look at a 90s Venom miniseries.

It’s summer break for me! I teach high school social studies, which is quite a demanding job. I have little time during the school year to keep up with comic book reading. Therefore, summer is primetime comic book reading season for me! So why not use that valuable reading time to read comic books from the 1990s, a period of time that is thought of by many to be the one of the worst for comic books? Sounds productive.

I like giving myself semi-pointless, but kind of nerdily-satisfying tasks. So over the next several weeks, I’m going to task myself with reading several comic books from the early to mid-1990s. Why the 1990s? Though I started reading in the late 1980s, it wasn’t until the 1990s that my comic book obsession kicked into high gear.

The 1990s also interest me because of its wonky reputation. Despite reading comic books heavily during that decade, I haven’t really gone back to read them because quantity doesn’t always equal quality. Comic books at the time focused on art over story, which isn’t exactly why I read comic books. I’m in it for the story and can put up with substandard artwork as long as the story is jamming. I find myself constantly going back to the 1960s, 70s, and 80s for my comic book fix. Revisiting the 1990s might be fun. Operative word there is “might.”

Here are the ground rules that I have established for myself. I’m mostly sticking to Marvel because I was an avowed Marvel zombie, although DC and Image will make cameo appearances too. I’m also limiting myself to books that I actually read at the time. I want to see if tween/teen Brandon’s recollection of the books hold up in the 21st Century. I suspect not, but I’m hoping to be surprised.

First up is Venom: Lethal Protector by writer David Michelinie and artists Mark Bagley and Ron Lim. Hold on to your pouches and die-cut variant covers! 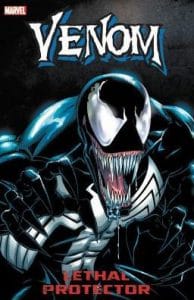 A little background first for the uninitiated: Venom first officially appeared in Amazing Spider-Man #300. After slumming with the plucky Peter Parker (AKA, Spider-Man) for a while, the Venom symbiote decided to ditch him.

Disgruntled reporter Eddie Brock, in the immortal words of 90s hero Sir Mix-A-Lot, pulled up quick to retrieve it. Hijinks ensued, murderous hijinks. Brock blamed his downfall as a reporter on Spider-Man, so that began an endless storyline of Venom trying to kill Spidey.

Venom became so insanely popular that he had to spawn off another symbiote, Carnage. Once you starting spinning off characters of characters that are spin offs, there’s only one thing left to do: give them a miniseries!

And that’s exactly what Marvel did in early 1993. Venom: Lethal Protector would be the first in a long line of miniseries that would feature everyone’s favorite gooey symbiote. The first issue featured a red foil cover that delighted and amazed my younger self and many others. It was the siren call of speculation, beckoning us towards the shores of future wealth and prosperity. If only it had been polybagged. Foil for your soul! 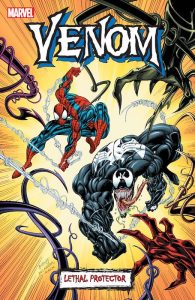 The story focuses on Eddie Brock doing the quintessential American activity of trying to slum it out in San Francisco. After reaching a tenuous peace agreement with his dreaded foe Spider-Man, Brock decided to cool his heels on the left coast.

Of course, nothing can be so simple for our antihero! Brock bizarrely ends up getting entangled with a group of underground hobos (what San Fran visitor doesn’t?) who curiously enough live in a section of the city that broke off during the 1906 earthquake and was somehow, someway perfectly preserved underground, ensconced by rock. I don’t have to lean too much on my undergraduate geography degree to tell you that this isn’t how earthquakes work at all. But it’s the 1990s, go with it!

Oh, and Spider-Man shows up to hilariously mistake Venom’s good intentions for helping the hobos out with murder and mayhem. Venom wasn’t that trusted of a property yet to fly solo without Peter Parker leaving his insanely hot model wife, who he calls frequently via phone booths (remember those?), to investigate hobos and symbiotes.

“Saving the homeless underground dwellers” subplot aside, Lethal Protector also features industrialist Roland Treece, who has been using his Mech-Assault wearing armored thugs for months to harass the innocent turn of the century hobo cosplayers. Why? It turns out there’s some hidden gold down there, but who gives a crap? The story is secondary here, folks. THERE ARE THUGS WEARING GIGANTIC ARMOR! DEAL WITH IT! 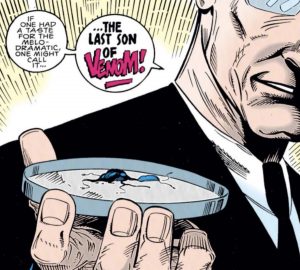 Of course Treece’s thugs are hellbent on only one thing: using the Venom symbiote to create… more symbiotes! The 1990s are fairly synonymous with the word “extreme.” And what’s more extreme than having FIVE symbiotes running around hobo-infested San Francisco? Those symbiotes are no doubt still insanely popular today. What’s that? They aren’t popular? Hmmm. I am shocked to learn that characters created as pure shock plot devices didn’t have any longevity. I must reevaluate my life.

Don’t fret, though. While more hobo-saving hijinks ensue, Venom eventually proves he’s on the up and up, finding his one true home amongst the hobo underground. Hooray! Cue the theme music from Renegade!

Whereas the story is kind of dumb, the art is actually superb. The art isn’t as overly-muscled or as multipouched as one might expect from a comic book from the 1990s. Part of that is down to artists Mark Bagley (issues 1-3) and Ron Lim (issues 4-6).

Bagley would go on to draw the wildly successful Ultimate Spider-Man title with Brian Michael Bendis, and Lim would draw nearly every Marvel character, carving out a successful career at Marvel, especially with Silver Surfer. Both are accomplished artists that provided a steady hand in the art department. That doesn’t mean that there aren’t some deliciously 1990s moments to be had in Lethal Protector.

I have a great appreciation of mullets. The 1990s were a time where one could wear his or her business in the front and party in the back without the jeers of his peers and strangers. Eddie Brock rocks the 1990s mullet moment with aplomb.

They even build this into the story somewhat, with his new mulleted hairdo being mentioned in the first issue. He’s got a new hairdo! No one will recognize him! Until, you know, three panels later. His Coach Buzzcut look was apparently too square.

How does one make Venom cooler and more EXTREME? Well, give his host a mullet, that’s how. The confidence given by the mullet is probably the greatest superpower in all comics. If only a mulleted Venom had showed up to tussle with Thanos at the end of Infinity War… We’re all left to wonder. Call me, Hollywood.

Exhibit B: The Jury and their anti-Venom buttons.

Pouches! Cool metal armor! Anti-Venom identifying buttons! The Jury, surely the greatest and most memorable baddies from the 1990s, are here to bring the pain to Venom. How can one tell? It’s their anti-Venom buttons that let you know they mean serious business.

If someone mugged me on the street, that would be bad enough. However, if they had anti-Brandon buttons on, it would severely mess with me for years to come. I would never leave the house again. Someone put a lot of effort into designing The Jury’s armor. “Hey, guys, What’s going to really drive the point home that we hate this guy and we’re here to specifically kill him? Cool metal armor isn’t enough. What we need is a button. Flair. Dude, let’s add a button. Let’s go EXTREEEEEEEEEEEME!!!”

Exhibit C: I got a fever, and the only prescription is more symbiotes.

If you’re going to have a Venom miniseries, you need to come packing some serious heat. One symbiote? Not enough. Five symbiotes? Apparently, that’s just right. Venom became a daddy in this series, with his suit birthing five precious little ones who want to make their papa proud by murdering, murdering, murdering. My eyes are moistening.

Venom: Lethal Protector: Why You Should Check it Out

Beyond the fact that that Eddie Brock has a bitching mullet, curious readers should check this miniseries out. Lethal Protector is reportedly one of the two comic books that the upcoming film takes its inspiration (the other being Planet of the Symbiotes, which I did not read back in the day).

Based on the two trailers for that film, I’m not certain if that’s exactly a huge selling point for anyone or not, but the miniseries is going to serve partial motivation for the film. I know I would love to see the whole underground hobo subplot play out on the big screen.

I was never a huge Venom fan back in the day, nor am I currently. The most interesting thing to happen to Venom in the intervening years since reading this back in 1993 has been the Agent Venom storyline, which has been all but abandoned by Marvel.

Lethal Protector held up inasmuch as I recall thinking it was okay back in 1993. Nothing earth shattering, but it wasn’t exactly a story I remembered being too terrible from my youth. It was fun to read this miniseries in 2018 because it’s more “I’m laughing at you, not with you” kind of experience. The whole plot of helping the hobo community was seriously loopy, and the entire “WE NEED MORE  SYMBIOTES BECAUSE… WELL… MORE!” subplot wasn’t exactly the most convincing of plot hooks.

Despite some weird moments for modern readers, Lethal Protector will provide a solid 30 minutes of entertainment. I can’t really deem this a classic, but I have definitely read worse from the 1990s!

Next up is the story that was perhaps my favorite comic book storylines at the time, Punisher: Suicide Run. If you have any suggestions for books I should tackle, be sure to send a response my way. I would be more than happy to flog myself for your entertainment.

Let’s talk about that new D&D Kickstarter! An interview with Chris Haskins of Nord Games.