By Clave Jones On May 28, 2018 Last updated May 28, 2018
Share TwitterReddItPinterestFacebookEmailPrint

“Cutting off your nose to spite your face” is an expression used to describe a needlessly self-destructive over-reaction to a problem. Well, Marvel has a problem with comic sales and not only have they cut off their nose, they’ve cut off both arms, the third toe on their right foot, and have had frequent liposuction across their midsection, all despite the fact that comic book relaunches have been shown to offer only a short term sales spike, not long term health.

The answer for everything at Marvel comics is to relaunch their titles. And the relaunches are getting more and more frequent, like natural disasters, where a “hundred year flood” is now spoken about seemingly each week. I’ve written copiously about the sales decline at Marvel comics. So rather than rehash that, let’s just try and summarize all their relaunches because they are confusing for readers old and new alike. 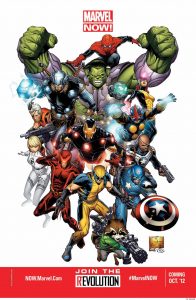 Marvel NOW! (2012-2014) – For decades Marvel hadn’t significantly rebooted their titles, keeping with traditional numbering strategies. This meant that a long-running title like Uncanny X-Men would have numbered in the hundreds, yet Marvel Now rebooted it as issue #1.

Coming right after a big brouhaha involving the Avengers fighting the X-Men, Axel Alonso–then Marvel EIC–described it as “the next chapter in the ongoing saga of the Marvel Universe.” Alonso further explained that the intent was to, “provide at least one great reason for readers—old, lapsed or new—to go into a comic store each week: a new issue #1 that’s an easy entry-point into the Marvel Universe.”

So Marvel had their heroes fight each other because they really, really love that. The result after was Marvel Now, a bunch of reshuffled titles such as Uncanny Avengers and the aforementioned new X-Men title written by Brian Michael Bendis.

Coming in waves from 2012 through 2014, it wasn’t entirely line-wide and was kind of a confusing mess. 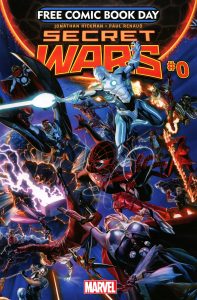 Secret Wars (2015 event) A big part of the reshuffling on Marvel Now saw a writer named Jonathan Hickman being in charge of a brand new New Avengers #1, in addition to pretty much the entire Avengers line, including the Fantastic Four.

Writing a deep, thoughtful, imaginative, fascinating slow-burn of a story, Hickman wove an epic tale through all those titles and characters. The culmination collapsed all the myriad of famed Marvel alternate universes (including the 616 and the Ultimate Universe) into one.

This capstone event was called Secret Wars and it coincided with the cancellation of all 50+ regular Marvel titles and replaced them with a bunch of Secret Wars short-run titles that run about 4 issues each. These short run titles could best be described as a modern take on the old Marvel “What If?” titles. Many were quite fun and I’ve written about this event before, so I’ll point you there.

If ever there was an opportunity to stick the landing with fresh #1s, it was in the wake of Secret Wars. Alas, it was line-wide but an unfortunate kind of a confusing mess. 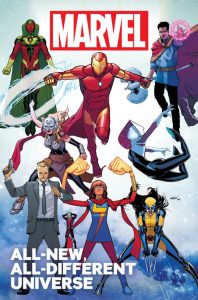 All-New, All-Different (2015) relaunched 65 titles as new #1 issues. As opposed to during Secret Wars when their titles really were all new and all different (the “What If?” concept), All-New, All-Different was more of a marketing thing. The conceit was to place new people into the old costumes. For example, Jane Foster became Thor and Sam Wilson became Captain America.

It was a complete restart at #1 issues. It was mostly all-new, as new faces took up the old mantles, but it wasn’t all-different, because these weren’t brand new characters in new situations. Ultimately, most readers vocalized that they would have preferred more brand new characters rather than a rejiggering of old characters, albeit with new faces.

This lasted until June 2016 and the beginning of big Civil War II crossover event that saw the Marvel heroes fight each other again because Marvel really, really loves that. All-New, All-Different was line-wide and was a big ‘ole confusing mess. 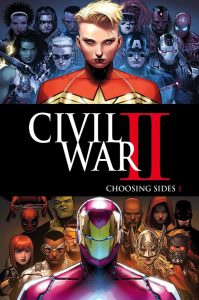 Marvel NOW! 2.0 (November 2016) If it didn’t really work a couple years prior, why not go ahead and try it again. Marvel Editor Tom Brevoort said that Marvel Now 2.0 was timed to coincide with Civil War II as meant to “refresh and revitalize” the titles.

He explained further, “One of the things a big event story is judged on, rightly or wrongly, is what kind of an impact it has on the Marvel Universe in its aftermath. That just becomes a condition of these big event stories: what is it at the end that changes the landscape?

It wasn’t line-wide and was a huge confusing mess. 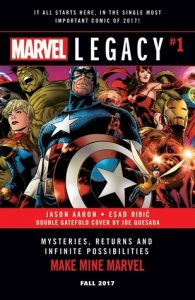 Marvel Legacy (September 2017) was meant to represent a moment where Marvel returned to its roots. After the previous few years of constantly rebooting their numbering back to number 1, Marvel Legacy was to return the comics to their original numbering, which in some cases was well into the hundreds. Avengers relaunched at #672, for example, while the Amazing Spider-Man relaunched at #789.

The traditional faces largely went back into the old costumes as well, with the All-New, All-Different faces now serving as heroes alongside the old. Really not much happened other than Marvel really wanted folks to lean into nostalgia and herald back to their glory days. The only thing they could’ve done that would have made Marvel Legacy more of a nostalgia move was to bring back Chris Claremont as the X-Men writer.

As with all the reboots before, there were LOTS of great stories, titles, and characters sprinkled throughout. Sadly, most of this good stuff was lost or diluted by the marketing hype and confusion surround the process of relaunch. I can’t imagine being a Friendly Local Game Shop (FLGS) employee trying to keep track of it. Marvel Legacy was/wasn’t (IDK anymore) line-wide and was kind of a confusing mess. 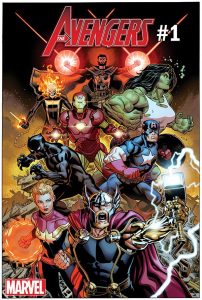 A Fresh Start (June 2018) You’ll notice the refreshes have been coming at an ever increasing pace, with the latest being less than a year after the last. At that pace Marvel will be rebooting so frequently that they’ll break the space-time continuum and summon Kang the Conqueror.

What we’re seeing as I type this is a reboot of Avengers with a new #1 numbering and a whole new creative team that is writing a story involving the legacy characters. In other words, it’s pulling an element from each of the above reboots and hoping it will be the one that sticks this time.

To be sure, lots of exciting titles have been announced, helmed by exciting creative teams. Here is a look at a few of them:

In six years Marvel has pushed six reboot events. Honestly, it’s hard to keep them straight. And it’s hard to trust their permanence at this point. We’ve written before that more long-run stories are needed in comics nowadays. The frequent relaunches suggest that Marvel may have forgotten how to do that.

That said, there have been great stories littered throughout each of the reboot events above. It really is worth trying to sort through it all to find them.

The Nerdy Jobs Podcast: An Interview with Erik Mona about Pathfinder 2nd Edition