At the risk of sounding like a grandpa, the sales of today’s Marvel comics just ain’t as good as they used to be. In fact, comic shop sales have declined for the 5th straight month.

It’s easy to point a finger directly at Marvel. I spoke with Tony Hoaglund, the co-owner of my FLGS (Friendly Local Game Shop). Tony said that he “doesn’t take any more risks on Marvel.” Among the reasons? He doesn’t know if a title is going to last 2 issues or 50 issues.

But there are other reasons as well. Let’s go through them all.

Marvel Comics are EXCITING right now! Unless you’re broken inside like I am. I have become so jaded with the current state of Marvel comics that I only see mud where others can see springtime flowers poised to bloom. And I see mud everywhere.

Why take a chance on a #1 issue? In keeping with Tony’s point above, the past several years of Marvel has shown the relaunch cycle shorten. Sure, they are producing new #1s in an effort to provide jumping on points for new readers, but comic fans have quickly come to learn that nearly all of those #1 titles are quickly cancelled.

Those that aren’t cancelled outright are almost always quickly relaunched with a new #1 of the same title. Rather than serving as a jumping on point, many comic buyers are using the relaunch as a jumping off point, something that Tony says he’s seen firsthand in his store. And the data backs up diminishing returns on frequent relaunches. 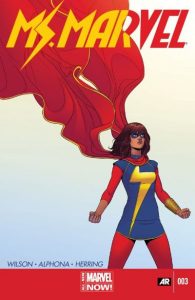 Marvel has become utterly gluttonous with crossovers. We can agree we live in uncertain times. Science fiction paints a depressing picture of our fate. Personally, I think that long before Marvel stops torturing us with gratuitous crossovers, the oceans will rise and drown us all, or our souls will be scanned into a hard drive, where we’ll forever live in the corners of Internet cyberspace like Reddit. I’ll let you decide which fate sounds worse.

Indeed, it’s hard to overstate just how much comic readers are worn out by the sheer magnitude of Marvel crossovers. (Personally, I think the wheels fell off right after Secret Wars. It was a perfect opportunity to come into new stories with a fresh slate, but they whiffed it bad.) We’ve also written about this before, so let’s move on.

Marvel never learns. You’ve always made bad judgement calls, Marvel. That’s just who you are. Like that time you went to Madripore with the Australian rugby team and ended up spending two years in a Genoshan labor camp making off-brand holographic foil covers. Classic Marvel. You’d think experiences would teach you that short term monetary gains at the expense of long term storytelling sucks.

Yet the biggest financial success Marvel has had recently is Amazing Spider-Man #25, a single issue that Marvel over-sized and slapped a $9.99 price point on. That made it a million dollar comic in terms of sales, but it only further served to alienate readers who are already feeling the pitch of regular Marvel floppies being $3.99 and Marvel trade paperbacks being $4,000 or whatever ungodly price they charge for their collected editions.

With Image offering $9.99 first trades and single issues often being $2.99, why wouldn’t fans sample other publishers? You can’t both have your cake and eat your cake like some kind of cake owning and eating Fing Fang Foom. Marvel can’t price their comics as they do, yet still expect readers to buy dozens of tie-in issues.

Let’s not get hysterical. Sales are still solid, the direct market comics shops haven’t collapsed, and the Marvel Cinematic Universe is wildly successful and can prop the whole biz up for a while.

I actually went into looking at the sales numbers expecting to see a downward slope I could ride a sled down. But Marvel is still selling comic books week after week. So although the news is pretty darned bad, it hasn’t spelled Victor Von Doom.

Ironically, I’m enjoying some of their more diverse titles that are also relatively self-contained and free from frequent crossovers. Jason Aaron is doing the best Thor since the Walt Simonson days, Squirrel Girl is a ray of sunshine, Luke Cage and Iron Fist is a lot of fun, and I’m undoubtedly on the Ms. Marvel bandwagon.

So there is hope. Let’s just hope that this rough patch teaches Marvel some lessons.