I’ve been a poo-poo head cranky pants this year. I’ll admit that.

But I have reasons. Fake news exasperates me to no end. It hurts my heart to see that people of different skin tones and genders can’t be considered equals. Social media makes me wonder if we aren’t in a period of reverse-Darwinism. Every time I like something nerdy, I have to listen to it being nit picked to death. Some of my favorite celebrities have passed away. I could go on.

2016 could have been a wholly miserable year, except that Squirrel Girl has entered into my heart these past couple of days via the Marvel Unlimited app.

If you aren’t familiar with Squirrel Girl, she is a Marvel Comics character. Doreen Green, aka Squirrel Girl, was created in 1992 by Steve Ditko. Her powers are that she can communicate with squirrels. No, really. And it’s surprisingly effective, as it’s allowed her to bring down the likes of Galactus and Doctor Doom.

Here first team up was as a member of the goof team, the Great Lakes Avengers. Later on she rose in popularity when she began serving as the nanny of Danielle Cage, the daughter of Luke Cage and Jessica Jones. (It’s no wonder that Anna Kendrick wants to play her in a movie.)

But her star has never shown brighter than we she got her own series in 2015, The Unbeatable Squirrel Girl!

The Unbeatable Squirrel Girl is a comic book series that is 110% sincere and joyous. The opening of the first issue has Doreen singing a song as she thwarts New York City muggers. The cover of the relaunch of the series pokes fun at itself by declaring it’s “only our second #1 so far this year.”

Squirrel Girl saves citizens from burning buildings. She averts train wrecks. She battles villains like Brain Drain, all while in the company of Tippy-Toe, her trusty squirrel companion. It’s good, clean, wholesome heroing by an adorable heroine.

How Squirrel Girl taught me not to be so miserable. 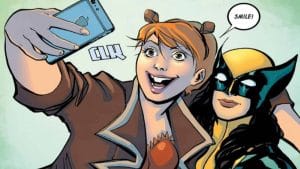 It’s ridiculous that I’ve enjoyed Squirrel Girl these past couple of days, which is probably why it warms my heart so. I’m a grizzled old Gen Xer who has lived 40 years of cynicism. In my life I have seen buildings fall, leaders disappoint, shuttles explode, wars get waged, and Firefly be cancelled.

But reading an issue of The Unbeatable Squirrel Girl is a 20 minute reminder that there is hope. Squirrel Girl completely lacks cynicism. No issues begin with “um, actually.” Doreen doesn’t review Captain America: Civil War or Rogue One with a headline of “not a perfect movie, let’s list its flaws.” And Doreen’s #1 dislike is injustice, meaning she fights hate in all its forms.

So, I say with all sincerity, gosh darned gee golly, I’m going to try my best to inject a little bit of the joyous optimism that permeates The Unbeatable Squirrel Girl into my daily life. Sure, it might be a futile attempt of the power of positive thinking, but as the ‘ole philosophers Plato and Jesus would teach, if you want to be a good person, you should try to be a good person and through that practice you will be made perfect. 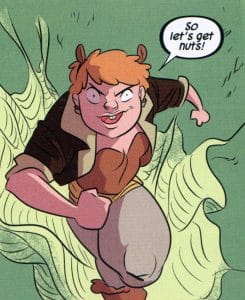 That’s just a start for me, but you have to start somewhere. Years and years of slowly turning into a poo-poo head cranky pants will take a while to rewind. I imagine it will be a couple steps forward, followed by a step or two back. I do enjoy my dystopian landscapes, after all. But if Squirrel Girl can do it, I can at least try.

How about you? How are you heading into 2017 with a little more joy and sincerity in your life? I’m open to suggestions. But no grim and gritty anti-heroes please. I want more heroes like Squirrel Girl.

You can buy Squirrel Girl here if you want some happiness in your life.