It would be so terribly easy to populate this list of seven animal themed Marvel characters with A-listers we all know and love or know and despise. There’s not much easier when it comes to superhero or super villain design than saying, “Hey, let’s give this guy/gal [insert animal] abilities and then dress and name them appropriately.”

But I’m going to highlight seven animal-themed characters from the Marvel Universe that are a bit more on the obscure side than your Spider-man, Wolverine, and Black Widow.

Initially an agent of S.H.I.E.L.D., Frank Payne was

assigned to infiltrate the criminal underground and given the villainous moniker Constrictor, along with a suit outfitted with two vibranium electrified coils.

While undercover, he snapped and became a criminal in his own right, but after winning a lawsuit against the hero Hercules in which Constrictor was awarded $168 million, he defected back to the good side and even registered under the Superhuman Registration Act.

Constrictor uses his coils to whip, constrict, and even electrocute opponents in combat, relying upon them almost entirely. He’s self-sure (what merc ins’t?), and that occasionally lowers his defenses by way of underestimation and lands him in spots of trouble – like the time Arcade was able to lure him into a trap in which a giant hammer crushed him.

Bringing up the gross out factor is Maggot, a mutant whose digestive tract is replaced with two giant, semi-sentient maggots named Eany and Meany who can consume any solid objects, converting the material into an energy that beefs up their host’s size and strength.

The slugs are not limited to his body cavity, either; they exit Maggot to feed and enter him to supe him up.

Melati Kusuma was a student of Doctor Curt Conners who 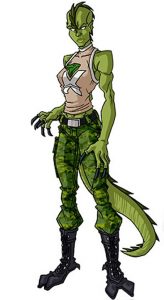 had lost both of her legs early in life. She stole the formula that turned Conners into the Lizard and modified it to work with her DNA, allowing her to retain her mental capacities while in her lizard form as well as the ability to transform to and fro at will.

As Komodo, Melati gains the usual spectrum of superhuman abilities – strength, speed, agility, reflexes, stamina, and healing factor – along with a prehensile tail and claws.

Komodo features prominently in Avengers Initiative in which she kicks major butt and even tugs at the ole heartstrings a bit for reasons I shall not spoil here. 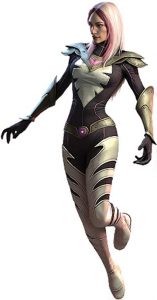 I’ve already given much love to Melissa Gold in my Thunderbolts build. A strong second in command, reliable, trustworthy, formidable, and gorgeous. Her powers have evolved over time from an ear-splitting scream as Screaming Mimi to the ability to manipulate “solid sound” to such effects as shielding, wings for flight, and concussive offensive weaponry.

Her song is not one that brightens the day, but rather one that signals an impending beatdown. 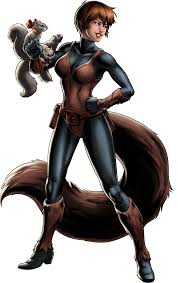 Along with the enhanced senses and abilities of squirrels and a prehensile tail, Doreen can also communicate with the rodents and enlists them in her skirmishes. While PETA would protest, you can’t argue with the results.

Squirrel Girl has bested the likes of Deadpool, MODOK, Wolverine, and even Thanos; all with the help of one squirrel sidekick (Monkey Joe) or another (Tippy-Toe), or whole armies of them.

According to Jon Morris’s The League of Regrettable Superheroes (review to come!), she was introduced in 1992 “as an antidote to the perceived bleakness running rampant in Marvel Comics’ multitude of X-Men-related titles” (pg 244). A little silly, but a lot dangerous.

Fritz von Meyer had his body consumed by an agitated swarm 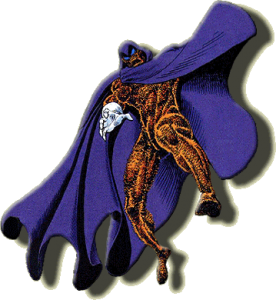 of mutant bees who absorbed his consciousness, permitting him to control the winged stinging insects.

He can manipulate the swarm into any formation he desires, but usually manifests as a humanoid body. His powers have had their locus shift from the queen bee to his skeletal remains to a sort of hive-mind shared consciousness.

Regardless, he never aspires to greatness. Spider-man beat him once by literally spraying his costume with Raid. When your kryptonite can be purchased for $4.79, your ceiling for malfeasance is awfully low.

Leech has the ability to dampen or completely

suppress the mutant abilities of those in close proximity to him. At first it was a passive power, but it has since been brought under his control such that he can restrict the area in which his power has effect.

Even though Leech has no other abilities, his dampening skill has been put to significant use – most notably as a checks-and-balance to friend Franklin Richards, whose powers are enormous, extremely dangerous, and unwieldy. He is also recruited by leaders within Avengers Academy to grant Hazmat a normal, powerless day; a gift beyond measurable value as Hazmat’s powers leave her confined to a radiation containment suit nearly 24/7.

I’m curious to see who Jason places on your radars! There’s just so much fertile ground when it comes to animal-themed Marvel characters. I took the path less travelled in the hopes of pointing you towards some lesser known heroes and villains, leaving off some of my favorites in the process. Look for Jason’s list to hit the site next week.

Thanks for reading. If you’ve enjoyed Nerds on Earth, please do us a solid and share via the social media buttons just below.