Marvel’s Secret Empire has pre-problems. Being that it doesn’t even start until April 2017, let’s go ahead and call the big comic crossover a timeflop. How am I certain that Secret Empire has pre-problems? Well, it’s a time-honored tradition that the internet blasts things that they haven’t seen or read, so I’m just following the crowd on this one.

But if you haven’t seen Marvel’s never-ending press releases about Secret Empire, it is the next big Marvel crossover that will haunt our fever dreams after Marvel Ultimate Extreme, Hero vs. Hero 9, Secret Invasion War, or 2 Marvel, 2 Furious or what have you.

And Secret Empire will feature Hydra-loving Captain America! If you don’t believe me, why, check out a concept drawing with a marketing tease that will most assuredly not resemble the final story in any way.

So, we know next to nothing about Marvel’s Secret Empire, an announced crossover that no one has seen, but it seems certain that the story will be so hot and shocking as to burn the faces off small children who accidentally cast their momentary gaze upon its pages. Please sign the online petition demanding that Marvel recall these comics that have not shipped yet.

OK, my snark has worn thin. Unless we are Kang the Conquerer, we can’t definitely make judgements on a comic book that hasn’t shipped yet. Sure, we’ve all had it up to here with Marvel’s marketing hype, but it’s understandable that they would, you know, actually want to hype their comics in order to sell more. So we could cut them some slack, I suppose.

Just as we shouldn’t judge a book by it’s cover, we should judge a future Marvel crossover by the mere solicitations and marketing copy. So let’s reserve judgement on Secret Empire until we’ve, uh, actually read it. Let’s turn or critiques to comic book crossovers in particular.

Ever since 80s Marvel EIC Jim Shooter realized that big crossovers like Secret Wars and Inferno would sell more issues, crossovers have become a fatter and fatter calf that current comic readers have come to accept will never ever be slaughtered. That fact means it’s important to acknowledge some of the problems inherit with crossovers. Sure, they boost sales short term, but the industry needs to get honest about the issues below. 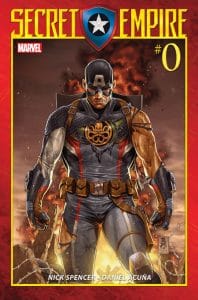 Further, all the tie-ins that come with comics become nearly impossible to read when the timing of the main story is delayed. If you bet your entire line on a crossover, you had best make sure to stick to the publishing schedule.

Crossovers promise real character development, but rarely deliver on it. Comics are so steeped in nostalgia that any new story is like a time paradox. Individual issues aren’t printed, they are simply dropped into the time stream at some point in the future and their shockwaves of complete fail are sent forward and backward throughout time. Readers want change, but only if it means their favorite characters stay exactly the same.

This leads to a host of story problems, mainly being that crossovers rarely have a compelling story. As Michael Adkins says, “They’re far more often flashbangs or retcons.” The events rarely feel like the results of a slow burn, built up after a long series of events over time.

This leads to cynicism. Adkins continues, “From a buyer’s perspective, comic publishers have a hard road ahead convincing [readers] that the crossover event is organic as opposed to just another ploy for me to buy a bunch of other titles for a couple of months.”

After decades of crossovers–each of them trying to be more shocking and extreme than the previous one–that cynicism has indisputably brought us to a point of crossover fatigue. Many comic buyers are buying purely out of begrudging habit, than actual enthusiasm for the story. What’s worse is this means that readers simply assume the crossover will suck, as we are seeing with Secret Empire.

Long-form storytelling suffers. Another inherent problem with crossovers is that they pull the characters away from their centered stories. The regular stories the characters are in get postponed–or worse, abandoned–in order for them to plop down in the midst of a sprawling Universe-spanning event. 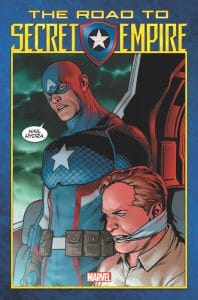 Crossovers tend to frustrate most writers. Granted, most writers pinch themselves that they are allowed to make a living writing about the characters they grew up with, but most also admit in off-the-record moments that they’d prefer to develop the stories without an editorially mandated crossover.

Says Jason Sansbury, “No writer can tell a long-form story past a few issues because they know they will have to deal with the crossover.”

This impacts character development. Sansbury continues, “First, crossovers tend to manipulate characters to fit the story they are telling than it be organic. For instance, they made Stark an a-hole in Civil War and Captain Marvel in Civil War 2.

“Plus, minor characters never get to be developed in a crossover environment.” Most writers (and readers) appreciate the supporting cast in a good comic book story, and crossovers simply doesn’t give that to us.

But outside of scheduling headaches, frustrated writers, reader cynicism, character assassination, and the absence of deep storytelling, I guess crossovers aren’t that bad. Cynicism aside, I’ve enjoyed some in my day, like Mutant Massacre, Inferno, and Secret Wars.

And it’s my love of comics that never allows my crossover cynicism to fully take root. After all, I’m not going to judge Secret Empire until I’ve actually read it. I have hope, after all. Maybe Secret Empire will be the crossover that turns the whole trend around.

How to Play D&D or Pathfinder in Your Pocket