A comic book crossover that impacted all of Marvel's mutants.

By Clave Jones On Nov 20, 2015 Last updated May 20, 2018
Share TwitterReddItPinterestFacebookEmailPrint

I had such nostalgic memories for Marvel’s 1989 Inferno Crossover, that is was an easy decision for me to write a few words in remembering it. The problem was I hadn’t read it in 25 years, so I needed to give it a quick re-read. So I found this Inferno reading order posted online, opened up my Marvel Unlimited app, and went to work.

Wow. I had forgotten that Inferno crossed over into 39 issues, and although the story is firmly centered around the mutants, Inferno is also in the avengers, Daredevil, Spider-man, and more, covering how heroes ofter than the X-Men protected New York from demons.

Yeeeeeeah, I’m not reading that many, so what I have for you won’t be comprehensive. I’ll just sum up the Inferno crossover for you. What follows are spoilers for a 25 year old comic story. 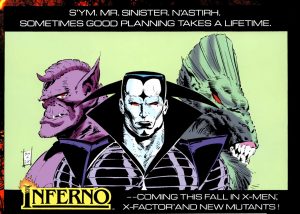 The core story was written by Louise Simonson and Chris Claremont, and began with S’ym and N’astirh, two demons from Limbo, planning a takeover of Earth, a plan that revolved around Magick (Illyana Rasputin of the New Mutants).

N’astirh casts a spell blocking Illyana’s teleportation power, thus trapping the New Mutants in Limbo with S’ym, who has taken control of Limbo’s hordes and is eager to kill the New Mutants. Manipulated by N’astirh, Illyana returns to New York by embracing her demonic power, opening a gateway that N’astirh holds open.

New York falls under demon siege, and Daredevil, the Avengers, Fantastic Four, Power Pack, and Spider-Man struggle to protect the city. Oddly enough, many New Yorkers simply see the demonic influences as quirky parts of everyday life and go about business as usual.

Meanwhile, Madelyne Pryor had made a deal with the devil…well, she made a deal with the demon N’astirh, but that’s close enough. N’astirh agreed to both locate her son Nathan and force the X-Men into killing the Marauders, and she in exchange would cast a spell that would make a permanent bridge between Earth and Limbo. 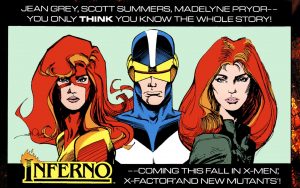 To keep his end of the bargain, N’astirh liberates Nathan from Mister Sinister’s laboratory, where Madelyne learns that she was in fact created by Sinister as a clone of Jean Grey. In fulfillment of the other half of the bargain, N’astirh alters the X-Men computer system so they can locate the Marauders. Driven by N’astirh’s spell, the X-Men attack the Marauders’ headquarters, gleefully killing most of them. Unaffected by this spell due to the protection of his organic steel armor, Colossus learns what happened to his sister Illyana and he concludes that he can only free his fellow X-Men from Inferno’s influence by saving her.

N’astirh and S’ym begin fighting each other for leadership of Limbo’s hordes that would allow them to fully rule of both Limbo and Earth. S’ym gains the upper hand, so N’astirh makes a desperate bid for victory by letting himself be infected with the Transmode Virus.

Colossus is horrified to see that Illyana she has so completely given in to her demonic side that she is totally covered by her eldritch armor and has demonic horns, legs, and a tail. Ashamed,  Illyana flees to Limbo, deciding to end the demonic invasion by assuming rule of Limbo. 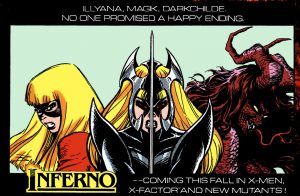 However, her teammate Wolfsbane pleads with her, and Illyana instead gives up her demonic powers by creating a massive stepping disc that banishes the demons, including S’ym, back to Limbo. She the throws her Soulsword in after them, sealing the portal shut. Afterwards the New Mutants find a seven-year-old Illyana inside the husk of her eldritch armor.

Stark raving mad, Madelyne Pryor maintains the spell, threatening to kill her son, Nathan, as a sacrifice to maintain the gate between Earth and Limbo. Linking herself to Jean Grey’s mind, Madelyne and shows Jen her entire life, including what she learned in Mister Sinister’s laboratory.

The X-Men and X-Factor break through her defenses to rescue Nathan, yet in a fatal bid for revenge, Madelyne attempts to take Jean with her in death. However, as Madelyne dies, the fragment of the Phoenix Force that first gave her life emerges and allows Jean to use its power to save herself. Jean does so and New York returns to normal.

You would think it was over, but part of Madelyne’s personality was transferred to Jean, and she becomes determined to get revenge on Mister Sinister. The X-Men and X-Factor learn that Sinister took over Professor Xavier’s School while the current headmaster, Magneto, was preoccupied with the demon invasion.

Anticipating the X-Men’s approach, Mister Sinister lays a trap, setting off explosives which demolish the Xavier School. But the X-Men avoid death and Cyclops blasts Sinister.

In the end, most humans simply thought Inferno was a figment of their imagination.

You’d be hard pressed to find someone who thinks that Inferno was the X-Men’s best crossover, but as you can pick up by reading through the synopsis, no one questions its audacity.

The crossover took about a dozen dangling, loose, or unexplored storylines and stirred them into a demon cauldron, spewing forth the Inferno storyline. In order to tell the story, Inferno used every major X-book, plus formed side book like X-Terminators, while also using other hero books.

If that’s not worth a little nostalgia, I don’t know what is.

The collected edition is available via Amazon.

Are You Trying to Remain Star Wars Spoiler Free? Here is One Jedi’s Tale