Can someone look at a calendar and see what year it is? Because I’m concerned that my recent Deep Space 9 binge-watching has created a temporal vortex that’s thrown me into the future.

I think that because I heard that there will be a Jessica Jones television show premiering this year and that there has already been a Daredevil TV show. This is impossible because as I read Luke Cage and Iron Fist comics as a kid I never could have imagined we’d see street level Marvel heroes on TV, and I of course never dreamed one would feature a newer character like Jessica Jones.

So are we really in a golden age of superhero television or am I trapped in a pocket dimension between worlds?

Indeed, Jessica Jones will become Marvel’s newest superhero television show. If you aren’t familiar with Alias, the comic by Brian Michael Bendis that first introduced Jessica Jones, then you’ll need to know that Jessica Jones will strike a darker tone than the typical Marvel fare. Much darker, as the source material comes from Marvel’s MAX line of adult comics.

The Netflix show will follow Jessica Jones, a damaged character who abandoned her superhero alter-ego, Jewel,  in order to become a private investigator that specializes on cases involving people with superpowers. In the words of her co-star on the show, Jessica is “a hard-drinking, short-fused, mess of a woman.”

Speaking of co-stars, what cast of characters can we expect in Netflix’s Jessica Jones?

[divider]Jessica Jones on Netflix: What can we expect? [/divider] 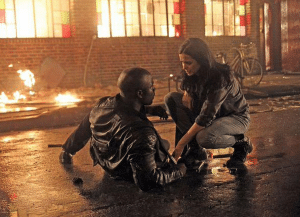 What can we expect? Well, certainly Kilgrave will mess with Jessica psychologically, which will give the show a dark feel. This will be a departure for Marvel. Kilgrave’s mind games will also undoubtedly force Jessica into some pretty terrible decisions, both personally and professionally. Being that she is a private investigator, the show should also have a strong noir feel, which will fill a new niche for Marvel.

Otherwise, the characters are brilliantly chosen and it is clear that the seeds are being sown for stories years into the future. First, Luke Cage will have his own show in 2016. But Patsy Walker also lays groundwork for future shows, while also allowing Marvel to slowly introduce a more mystical side that will pay dividends in the upcoming Doctor Strange movie starring Benedict Cumberbatch.

And while Daredevil or the characters from that show might make a cameo, don’t expect other Marvel shows like Agents of SHIELD to have any tie-in whatsoever.

In concluding, we are definitely living in a golden age of superhero television. Jessica Jones is proof that all types of characters are being allowed to have their stories told on the small screen and I’m ecstatic.

Here is a deeper look at Jessica’s stories in the comics if you are interested.

Marvel did not make a Misty Knight & Colleen Wing…