A Primer for Marvel’s Daredevil on Netflix

Netflix will unleash what is supposed to be a series of 4 shows set in the Marvel Cinematic Universe. The Netflix model is going to make this an interesting one to try and cover. With 14 episodes dropping all at once, there will be no great way to do recaps and we are talking about doing a review of chunks of the show at a time.

Daredevil is the secret identity of Matt Murdock, a modern day lawyer who fights for justice in the courtroom by day and by night in the guise of his secret identity, Daredevil. 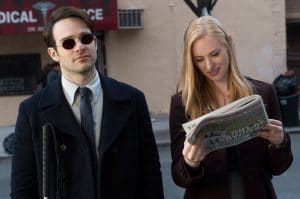 Matt Murdock was struck by radioactive chemicals as a kid and loses his sight but all his other senses grow to supernatural levels and he develops a kind of radar sense.  After getting his powers, he eventually studies under a wise teacher known as Stick, who teaches him how to use those powers to become a better fighter.  Daredevil isn’t superhumanly strong or tough per se; he is clearly what the Marvel Universe is calling a street level character.  And his streets are the Hell’s Kitchen neighborhood of New York.

Kingpin is Wilson Fisk, a crime lord who frequently battles Daredevil in the comics. Both have the deep ties and connections. In the comics, Kingpin is a massive sumo-sized presence, which would be hard to pull off in the show, but I love the casting they did with Vincent D’Onofrio, who has a large enough sense of engagement to pull it off.

Every hero needs a best friend and Daredevil’s is Foggy Nelson. They met each other in law school, studied together and are now legal partners. Initially Foggy doesn’t know Matt’s secret identity and I would bet that is where this series starts.

And Karen Page works for them. Her story in comics is pretty intense, as she goes from working as a receptionist at the law firm to having become a drug addict.  She does eventually become Daredevil’s lover and knows his secret identity, which creates issues for him down the road.

Claire Temple is being portrayed by Rosario Dawson, and she will likely be a connector to the upcoming series in Netflix and Marvel’s experiment.  In the comics, Claire is the ex-wife of Luke Cage, who becomes Power Man and later becomes husband to Jessica Jones, who is the lead of the second upcoming Netflix series.

One of the best runs of Daredevil in the comics is a run that was written by Frank Miller and drawn by John Romita. It is the source material that was killed metaphorically by the horrific Ben Affleck Daredevil movie.

Both Miller and Romita are getting writing credits on the show according to IMDB.com, which means that the tone of the show will be darker, very man against the world and, looking at the previews, doing some interesting things with Murdock’s Catholic upbringing and spirituality. (The Miller run covers issues 158-191 of Daredevil and is a great run withs some iconic storytelling just before Miller jumps to DC to make The Dark Knight Returns, which many hold up as one of the holy grails of comics.)

Why We Don’t Need Comic Reboots

7 Gasp-Inducing, Heart-Wrenchingly Big Moments From Season 5 of The Walking Dead

Can The Last of Us Break the Video Game Show/Movie Jinx?