Marvel’s Jessica Jones will be the next Marvel television series developed by Netflix. All episodes are set to premier in 2015, only months after Marvel’s Daredevil.

Our introduction to Jessica Jones will be narrated by Daredevil’s Wilson Fisk, played by Vincent D’Onofrio:

Thank you, Wilson, we’ll take it from here.

[divider] Who is AKA Jessica Jones? [/divider]

Jessica Jones is a Marvel Comics character who first appeared in Alias #1 (2001). Jessica Jones was a former superheroine who became a private investigator.

In addition to Alias, Jessica Jones has also starred in The Pulse, and became a member of the New Avengers alongside her husband, Luke Cage. Jessica Jones has used the aliases Jewel, Knightress and Power Woman. 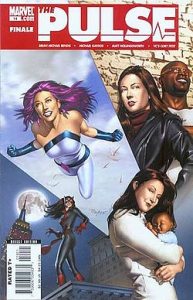 The story goes that Jessica was a Midtown High School student who had a crush on Peter Parker and was actually present when he was bitten by the irradiated spider. Jessica was teased and bullied by her classmates, particularly by Flash Thompson.

Jessica’s family was on vacation when their car collided with a truck carrying radioactive chemicals. Her family was killed and she spent several months in a coma.  She awoke to the coming of Galactus outside her hospital room. At this point Jessica Campbell was placed in an orphanage and adopted by the Jones family.

Peter had since become Spider-Man and had also lost family (his Uncle Ben) due to a tragic circumstance, so he showed Jessica kindness. Jessica mistook his attention as pity and lashed out at him.

She later discovered that her exposure to radiation granted her super strength, limited invulnerability, and flight. When she witnessed a fight between Spider-Man and Sandman in the halls of her school it inspired her to use her abilities for good.

Jones was a newbie heroine and going by Jewel when she intervened in a disturbance involving longtime Zebediah Killgrave, the Purple Man. This was to be an event that would shape her.

Killgrave used his mind control power to place Jones under his command, and for 8 months psychologically tortured her and forced her to aid his criminal schemes. The Purple Man sent Jones to kill Daredevil, but she attacked the first hero she saw in a red costume, the Scarlet Witch.

As Killgrave’s mind control began to wear off, Jessica attempted to escape, but she was severely injured by the Vision and Iron Man. Carol Danvers was the only Avenger who actually knew her and took her to safety.

Now under the care of SHIELD, Jessica Jones remained in a coma for 8 months, where she was also treated psychically by Jean Grey of the X-men. Now under the name of Knightress, she gave superheroing one last hurrah.

She met up with fellow superhero Luke Cage in order to bring down the Owl. After defeating the Owl, she discovered that one of the thugs had brought his children with him. She looked after the children and Luke Cage went to her home later that night where the two had a long talk, the first step toward their romance.

But Jessica Jones was devastated when she realized that no one noticed she was missing for 8 months and also still traumatized by her experience with Killgrave, she gave up being a costumed superhero and turned to private investigations. 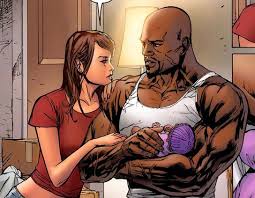 But even as a private investigator her costumed background kept pulling her in, as she was sought out by clients with superhero connections, despite her wishes to leave the superhero life fully behind her. Carol Danvers set Jones up with Scott Lang, the second Any-man, and the two dated for several months.

Meanwhile, the creep Killgrave escaped from high-security prison and set his sites again on torturing Jones. But the mental defenses Jean Grey had given her allowed Jessica to free herself from Purple Man’s control. At this time, Luke Cage and Jessica Jones admitted their feelings for each other.

After becoming pregnant with his child, Jones and Cage began a committed relationship and were married.  Jones and Cage gave birth the their child and named her Danielle after Luke’s best friend, Danny Rand (Iron Fist).

Jessica Jones is strong character despite her tortured and horrific past. She will undoubtedly make for compelling television when she is portrayed on Netflix by Breaking Bad’s Kristin Ritter.

Memories of My First Comic Shop