Before they were seen in Avengers In infinity War, the Black Order were comic favorites.

The Black Order is a collection of nasty, nefarious knaves that serve Thanos. Also known as the Cull Obsidian, these despicable, depraved henchmen raze worlds, gathering tribute for Thanos or are tasked along with Thanos’ Outriders with gathering Infinity Stones.

So who are the members of the Black Order? Let’s get to know them.

Corvus Glaive is a master strategist and tactician who servers the right-hand man of Thanos to lead his armies into battle. His signature weapon is a big ‘ole glaive, if you didn’t figure that our from his on the nose name.

But what is interesting about Corvus’ glaive is that Corvus can not be killed while he is holding it, granting Corvus immortality as long as the blade stays intact. Once, when Corvus had failed him, Thanos snapped Covus’ glaive in two and gave him the option to either kill himself or Thanos would do it for him. Corvus opted to kill himself, but since it is comics, he got better after a short death.

Additionally, Corvus has the standard array of superhero speed, strength, endurance, and durability.

I am a servant of my master, Thanos-- a destroyer of worlds, a breaker of kings. I am one of the five, Corvus Glaive.

The wife of Corvus Glaive, Proxima Midnight doesn’t have a glaive, she wields a simpler spear that is no less deadly. Crafted by Thanos himself out of a star/ supernova / black hole thingie. When thrown, Proxima is able to exert control over its density and never misses her mark. Once struck, a target is immobilized as if covered by a net and the spear also carries a lethal neurotoxin, which can kill just about anything within moments. It was powerful enough to bind the virtually limitless strength of the Hulk.

She also is nigh invulnerable, in addition to enhanced strength, speed, and reflexes.

Corvus Glaive also has a brother on the Black Order: Black Dwarf, the big bruiser of the team. Black Dwarf has super-strength, enhanced density, and impenetrable skin that can withstand a blow from even Ronan or Annihilus.

Sometimes wielding a maul, sometimes a battle-axe, Black Dwarf was forced to retreat when the defenses of Wakanda overwhelmed him.

Ebony Maw finally breaks from the martial combatant mold of the Black Order. Ebony Maw’s contribution to the Black Order relies on his supernatural abilities of persuasion. He is able to take hold of a person’s thought process and make them serve his own goals with nothing but his words. Even the strongest minds, like Doctor Strange, have fallen under Ebony Maw’s dark suggestions, as it has been said that Ebony Maw has a “black tongue that spreads mischief and evil wherever he goes.”

First appearing is Jonathan Hickman’s Infinity #1, Supergiant has the ability to read and control the minds of people of any race. Described as a “mental parasite”, Supergiant can control, steal, and devour the minds of her victims. Further, she can possess and control multiple individuals at once, even to the point of commandeering the host bodies of those she has taken over from a great distance away.

A psionic entity, Supergiant can phase through almost anything, including opponents and obstacles, making her immune to physical forms of damage.

The Black order has also included the following members in some iterations of the team.

Black Swan was pulled into Earth-616 from Earth-1365, and if that is confusing to you, it’s OK, cause it’s confusing to all of us. Just know alternative dimension and later recruited by Thanos for the second iteration of the Black oRder and you are OK.

As a result of traveling between alternate Earths, Black Swan is very knowledgeable about the multiverse and has the ability to speak in multiple languages, including some of Earth’s oldest languages. She has access to advanced technology and has displayed multiple powers including energy beams from her eyes, flight, super strength, the ability to generate holographic visuals from her hands, and also telepathy which she often keeps hidden in order to covertly glean information from others.

Coven is a group of three witches who were originally recruited by Corvus Glaive when he doubted the trustworthiness of Ebony Maw. Living on the edge of the universe, it turned out that Coven was rumored to be older than any god, so they ended up playing a role directly with Thanos himself. 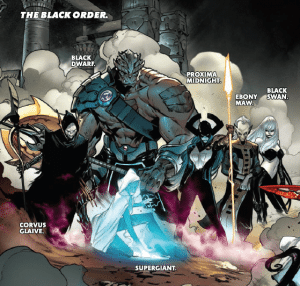 The Black Order is a relatively new creation as comics go, although their presence in Avengers Infinity War has further helped cement them as fan favorites.

Curiosity has grown toward them after they appeared on the big screen in Avengers Infinity War, and rightfully so. They are cool.

But they also get beat around a bunch and don’t have as large a presence in the comics as you might think. This is understandable. You want your heroes getting more page time, after all. Still, it’s a treat the the Black Order graces the comic page, as it was in their most recent appearance in Avengers: No Surrender.

D&D Will Have TWO Adventure Books this Fall