After being away from the Avengers comics for a few years, the latest storyline brought me back. 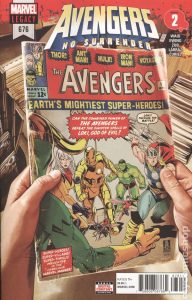 No Surrender was a weekly Avengers story that ran for 16 weeks. The writing duties were shared by Mark Waid, Jim Zub, and Al Ewing, who participated in a collaborative creative session that determined the overall direction and story beats. Art was rotated between Kim Jacinto, Pepe Larraz, and Paco Medina.

What No Surrender did was to cancel that confusing variety of Avengers titles in order to bring all those teams and characters into one weekly book that told a single story. The additional benefit was the weekly publication schedule tightened the time between installments, which made it easier to keep up with the story, unlike a typically sprawling crossover that might be drawn out over several months, meaning you’ve forgotten what you read in the issue previous by the time the next one finally released. If more comics told a single, focused story like No Surrender, I’d read more comics.

I don’t want to spoil everything, so I’ll just try and highlight a few high level things that I enjoyed about No Surrender. Still, there are minor spoilers ahead, so be forewarned.

Why I liked No Surrender, the big Avengers tale. 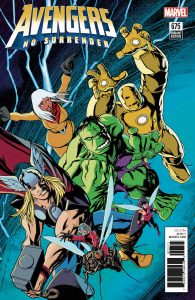 It was an entertaining and engaging story. The overarching story was that the Grandmaster was staging one of his galactic contests, with Earth serving as the “game board.” In order to prevent tampering, many of Earth’s Greatest Heroes were placed in a state of stasis. Upping the stakes, two teams of aliens (including Thanos’ Black Order) faced off against one another, with the remaining Avengers trapped in the middle as pawns.

The whole thing was entertaining from start to finish. While I wasn’t familiar with some of the characters, and the absence of the Big 3 seemingly poised to limit the appeal, I was nevertheless engaged with the characters and didn’t feel like any were wasted.

What’s more, the story was a tried-and-true one of heroes overcoming impossible odds against cosmic opponents. I like it when a band plays their hits.

New characters were done well, as were some C-listers. New character Voyager was teased in last year’s Free Comic Book Day title and her inclusion was done well. The twist with her character was a fine one and I wouldn’t mind seeing her in future Avengers stories. 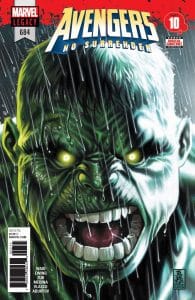 They did right by the Hulk. It’s been all over the marketing, so it’s no spoiler that No Surrender brought back Bruce Banner as Hulk. Boy did they ever.

The series wrote his return well but they also bored into his head in a really interesting way, setting up Al Ewing to relaunch the Hulk title this year. What was at once a title I’d certainly pass over, is now one that I’m genuinely interested in checking out.

I’m a sucker for backmatter. The team lineups and recap they did at the beginning of each issue is something every comic should do. But the real treat were the interviews, letters, and behind-the-scenes looks they did over the last couple of pages of each issues.

I like behind-the-scenes material to begin with, but No Surrender was especially well done in this regard. And my biggest takeaway was that the creators had a blast making these comics and that the entire endeavor was very well organized and edited.

I highly recommend Avengers: No Surrender, both for the entertaining superhero story as well as the format. I wish more comics would tell more self-contained like this one. I’m sure your FLCS might be selling run packs at this point. Or you could wait until Marvel Unlimited or the trade.