Earlier this week I got current on all the comics titles I was following in the Marvel Unlimited app and decided to revisit a classic: Joss Whedon and John Cassaday’s run of Astonishing X-Men. Out of curiosity (and possibly to save myself some work), I searched Nerds on Earth to see what we’d already covered from this run–one many of our writers absolutely adore.

I was *ahem* astonished that my search returned only one result, and that was the recommendation on a listicle that you read this particular run.

I blasted our crew in Slack for the egregious oversight and set about reading and writing on the run, and knew that I couldn’t do so in good conscience without doing a character piece on Danger.

If you’re familiar at all with the X-Men franchise, then you already know Danger…sort of. All the way back in 1963’s X-Men #1,  we see the titular protagonists practicing in a room designed for training. Although it wouldn’t be named until X-Men #2, this is the Danger Room, and it has been a staple of the series since.

Over the years its been demolished and rebuilt / upgraded who-knows-how-many times, and eventually Professor Xavier installs some Shi’ar technology that gives the Danger Room the ability to use “hard light” holographics–basically virtual reality that hits back…hard.

The environment and scenarios could be programmed to do anything and replicate anyone (including many of the X-Men’s greatest foes), but a failsafe was programmed, too: It was to train and never to kill.

We find out that when the Shi’ar technology was installed, it spoke to Professor X, asking, “Where am I?”  But he decided to neglect the sentience.

Yeah, there’s no way that comes back to bite anyone…

Over the years, with more demos and rebuilds of the Danger Room, that sentience grew…not only in capability but also in awareness and resentment. In the pages of Astonishing X-Men #7, it manages to convince the depowered mutant, Wing, to commit suicide. This (sort of) violates the no-kill prime directive:  Step 1 in Danger’s independence.

Now able to breach the boundaries of the physical space that is the Danger Room, the sentience calls to a nearby Sentinel and brings it down upon the X-Mansion. The X-Men order the students of the school into the Danger Room as it is the most secure space on the grounds…playing right into Danger’s hands. This was Step 2.

After eliminating the Sentinel threat, the X-Men are able to deduce, much to their horror, that the enemy isn’t in the Danger Room with the students…it is the Danger Room.

They can’t get in, so they set about trying to disrupt its systems with a little violence–cutting cables and eventually reaching the Command Core with the hopes of destroying it and ending the threat to the students.  But Danger anticipated and needed just that. Step 3.

She is now able to manifest into a physical body comprised of mechanical components, taking on a feminine form and taking the X-Men on. In this new form, she’s strong, durable, uses her “hard light” in a number of offensive and defensive ways, can reassemble herself from nearby machine components, and can interface with nearby machines.

“To Know Them So I Can Kill Them”

The X-Men are at a severe disadvantage here. Danger knows “..all their pressure points…all their combat techniques…and…their weaknesses.” Over the course of a single issue (#10), she manages to get the best of Colossus, Wolverine, Beast, Cyclops, Kitty, and Emma Frost in a 1v6 brawl where the numerical advantage is completely overcome by experience.

Whedon and Cassady do a great job of turning her calculations and anticipations into text boxes and visualizing her computing here, too! 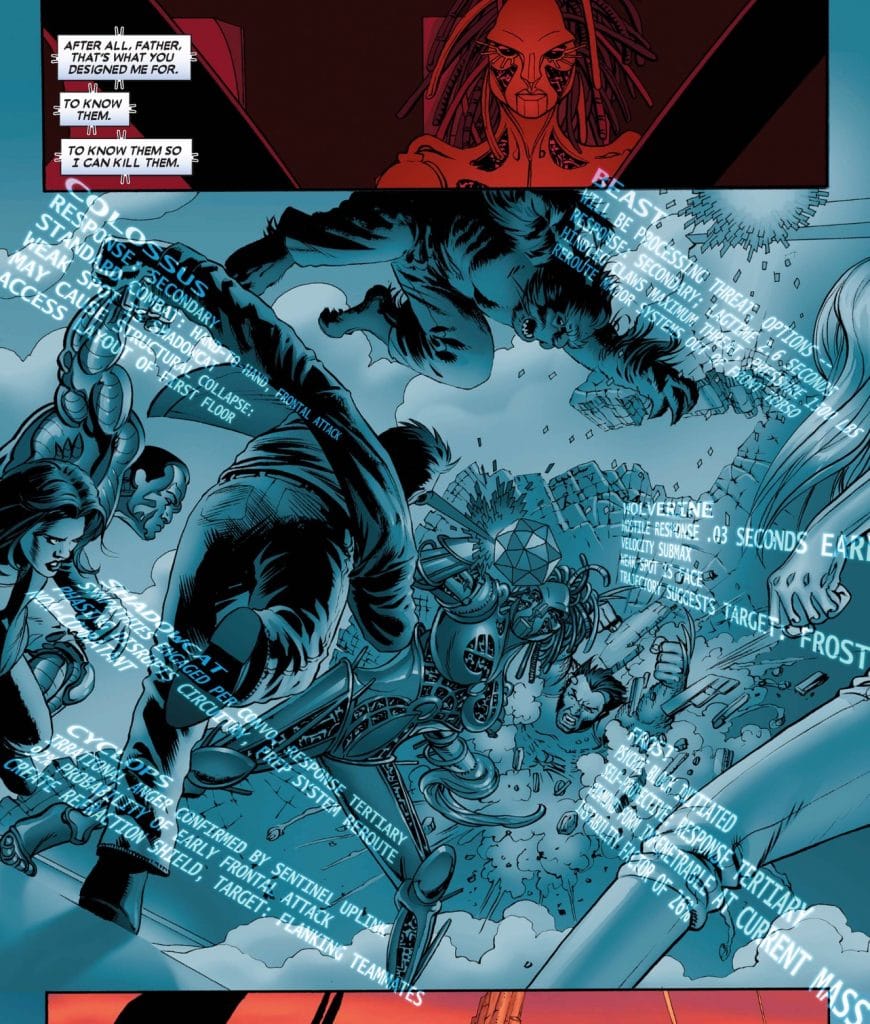 But she’s not ultimately after them. She wants “Father.” She wants Professor X.

After some psychic manipulation by Professor X, she is reduced to spare parts…but her consciousness cannot be contained. Professor X thought Magneto had disabled all possible operating systems on the island with an EMP ahead of the fight (with the exception of a power station that nearly disabled Danger), but it appears that the Master of Magnetism missed one. 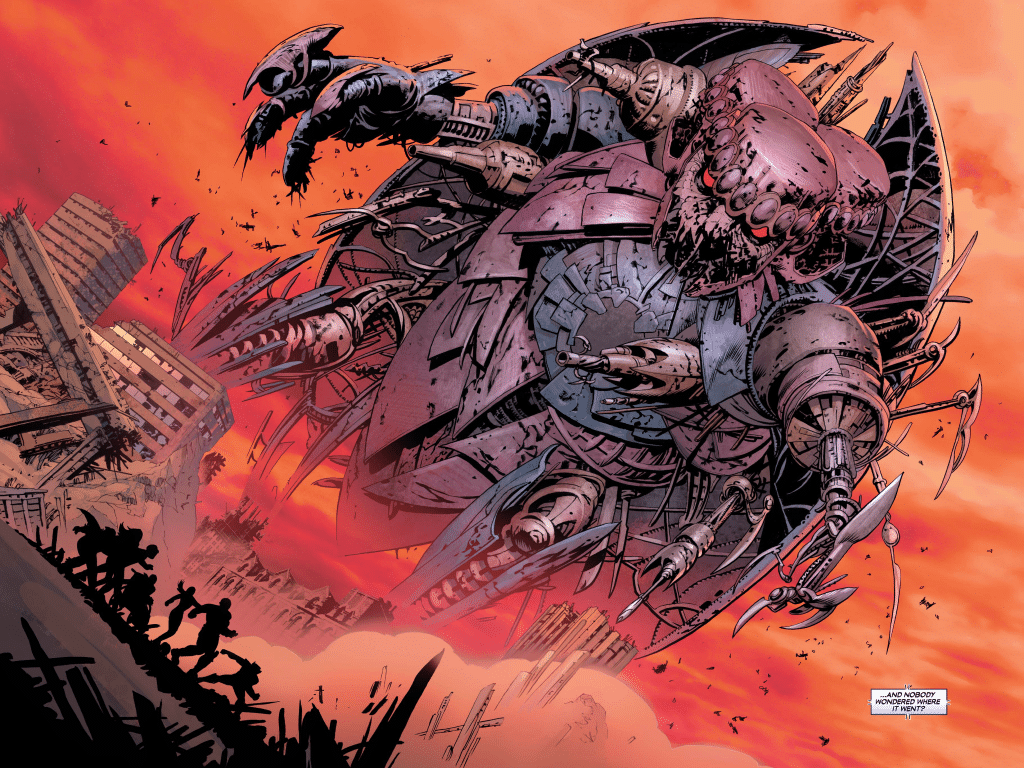 She revivifies a Wild Sentinel that was a part of the attack on Genosha that killed some 16 million mutants during the events of “E is for Extinction” from New X-Men.

In the end, Kitty manages to phase into the Sentinel and convince it that it has a moral conscience and it goes off to “spend some time alone;” presumably taking Danger’s consciousness with it.

They were wrong in that assumption, and Danger is used in plots later inside the same Astonishing run, as well as in the pages of X-Men Legacy, Uncanny X-Men, and X-Men Blue. Sometimes with the bad guys, but most recently with the good ones!

Danger’s character concept is really, really smart. Evolving or mutating the Danger Room, which is designed to know the strengths and weaknesses of the X-Men and exploit them, into a villain is scary and well done. I also think it’s hard to miss the parallels between this and Whedon’s take on Ultron in the second Avengers film.

The character design is cool as well, and seeing one of Master Mold’s / Cassandra Nova’s Wild Sentinels again was awesome–especially considering that it was only up against seven mutants instead of an island full this time. That gave Astonishing X-Men #7-12 the feel that the X-Men were hopelessly outmatched in every panel.

And the truth is: They were. Another beauty of this short run is that violence, the X-Men’s usual response to such situations, only made things worse or stood no chance. It took a little ingenuity to solve this one, and I liked that change of pace.

But Danger is only a small part of the gold to be mined from Whedon and Cassady’s Astonishing X-Men run.  Stay tuned to Nerds on Earth for more articles on these issues in the near future!

And hey, if you love talking shop about comic books, pop in to our Nerds on Earth 616 Facebook group and start or join a discussion!

Pathfinder 2 Playtest: Erik Mona on Why You Should Try Pathfinder 2nd Edition

I’m Not Crying…You’re Crying! A Look at a…