Marvel comics often likes to keep it in the family. In fact, there is a long tradition of superpowered siblings, villainous parents, or parents having heroic children. Indeed, there have been family legacies of both heroism and villainy.

If you dig a little deeper into that, it might seem that comic books are trying to tell us that upbringing counts for a lot when it comes to a person’s character. Nature’s gamma rays or mutated DNA might create the superpowers, but comics seem to be telling us that the nurture of a family goes a long way in deciding the path that progeny will walk.

But as is typical with comics, there are inconsistencies in the manner in which family relationships are “drawn” out. Nowhere is that more true than in Hank Pym’s relationship with Ultron.

Listen, it’s weird to talk about a fictional comic book character and his robot creation as father and son. But that’s honestly the way it’s portrayed in the Marvel Universe, and as far as I know, no one has ever called it out as kooky. In fact, the two characters explicitly address each other as “father” and “son.” 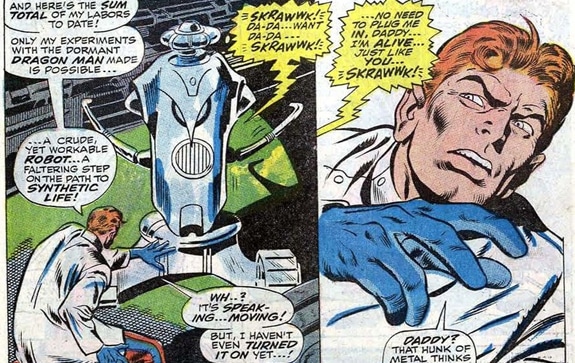 To be fair, I guess you could say that Hank Pym was present in the “birthing room,” so to speak (Avengers 57–October 1968). Ultron is the creation of Hank Pym, not from his sperm (DNA), but from his brain patterns. Then like a stereotypical teenager, the robot developed its own intelligence and rebelled, immediately feeling an irrational hatred for his “father” Hank.

But Hank never had an opportunity to influence Ultron’s thoughts like one would in a typical father and son scenario. You know, while playing catch in the backyard or whatever. Alas, Hank didn’t even know he had a “son” until Ultron attacked him for the first time and it was revealed that the robot had developed self-consciousness. 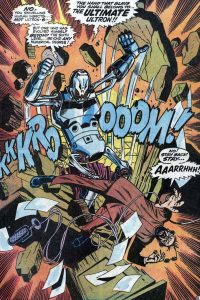 So should Hank Pym be held responsible for Ultron’s behavior? As far as the Avengers went, the answer was a resounding yes. Indeed, there were deep whispers among the Avengers (as well as most comic book readers) that Hank Pym was in the wrong just by “fathering” Ultron. Never mind that Ultron developed his own self-consciousness and Pym had no nurturing role in forming his character.

The sins of the son became the sins of the father. And if you think about it, don’t we (real humans) typically blame a parent if a kid turns out bad? Surely they must have done something wrong as a parent, we think. We postulate that maybe the parent should have worked less, or drawn stronger boundaries, or lost their temper less, or whatever. It’s hard to blame the kid after all. 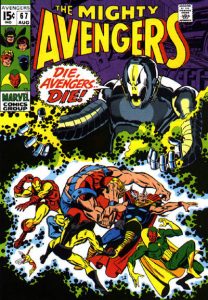 Now, we don’t seem to mind the lack of symmetry in that thinking when a child is better than a parent. We’ll blame a parent if a kid turns out bad, but we don’t want to give credit to a villainous parent when a kid turns out so much better than they. (Think of Magneto’s children or Stature, daughter of the once criminal Scott Lang.)

It’s a gut response in wanting to blame Hank Pym. Heroes should have heroic kids, we think, so when Ultron wakes up 110 proof pure evil, it’s unsettling. We react to that discomfort by looking for someone to blame. Hank was the first available target.

But geez, it’s just a comic book, after all, and Hank Pym certainly had other sins on his ledger. Still, if I ever create an indestructible robot that spontaneous develops a consciousness that is irrationally evil, I’d want my teammates to at least give me the benefit of the doubt.