A universe as rich and varied as the Doctor Who universe offers countless opportunities for roleplaying adventure. You can go anywhere and do almost anything. The limits are only your imagination. But it offers its own difficulties as well. After all, how do you create a game system that literally lets characters go anywhere and any time?

This might be partly why the first two attempts at roleplaying games based on Doctor Who encountered difficulties and neither lasted particularly long (for details on these first two games, see the previous article in this series). After Time Lord in 1991, it would be eighteen years before another Doctor Who game appeared on the market. 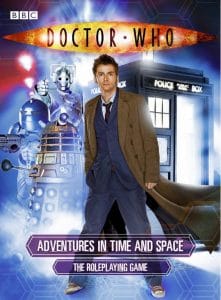 That game would be Doctor Who: Adventures in Time and Space, published by Cubicle 7 in November 2009. The game almost immediately received numerous accolades from both Doctor Who fans and roleplayers, and has gone on to win several awards, including the 2010 UK Games Expo Best Roleplaying Game award and the 2013 ENnie for Best Family Game, and to be nominated for several others.

The game was originally released as a boxed set—something unusual in the modern roleplaying market, giving it a bit of an old school feel. The set contained two rulebooks (one for players and one for gamemasters), an adventure book, several “gadget” cards, and a set of cardboard “story award” tokens.

But despite the game’s older style of presentation, it contained truly innovative game rules. While FASA’s Doctor Who Roleplaying Game had merely modified the rules of another game (their Star Trek Roleplaying Game) and then attempted to hammer a Doctor Who feel onto them, Adventures in Time and Space’s rules are built entirely around being a Doctor Who game, which ultimately allows them to emulate the feel of the television series far better than the FASA game or Time Lord, which went with a very rules-light approach. 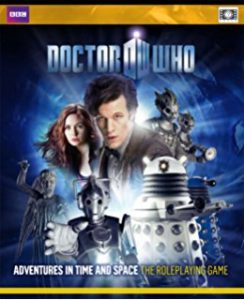 One notable example of this comes in the game’s combat rules. Fitting with Doctor Who’s style, combat is heavily discouraged in the game, and actual combat resolution is very deadly as a result. However, it is the initiative system (the order in which actions occur) where the game shows its true innovation.

The system mirrors the television series, where the Doctor often talks his way past his enemies’ guns.

The game’s character creation system also accomplishes something previous Doctor Who games have struggled with—balancing human and Time Lord characters (as well as other alien species, robots, etc.). In FASA’s game, Time Lords were generally considerably stronger than humans, and this was true in Time Lord as well, where players played either the Doctor or one of his companions and didn’t actually create their own characters. 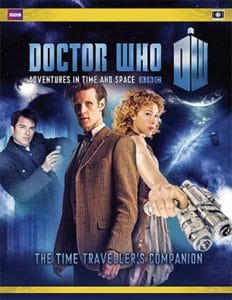 In the Cubicle 7 game, players select traits for their characters during character creation. These traits provide various special abilities. Being a Time Lord or some other alien creature requires selecting a trait to make your character one, thus using up some of the traits that might otherwise go to other abilities.

Also, the game uses a “story point” system. Characters begin with a certain number of story points (and can gain more during play) that they can use to affect the outcome of dice rolls. Time Lord characters start with fewer story points than humans, which means that while humans may not have some of the extra special abilities Time Lords get, they have the opportunity to adjust their luck more often.

There’s also no default assumption on what types of characters the players will play. In the FASA game, the assumption was that groups would consist of a Time Lord who is not the Doctor and his or her human companions. In Time Lord, the assumption was that players would play the Doctor and his companions (and indeed, the game had no rules to create other characters). The new Doctor Who Roleplaying Game allows for both options—and more, such as all-human groups centred around organizations like UNIT or Torchwood.

After the original release of Adventures in Time and Space, a couple additional releases for the game quickly followed: a Gamemaster’s Screen and Aliens and Creatures, another boxed set detailing the various aliens and monsters that populate the Doctor Who universe. Other supplements were also announced, although these were hit by delays that resulted in a gap of a couple years before more products showed up.

Although the Eleventh Doctor Edition was once again a boxed set, this would be the end of boxed sets for Adventures in Time and Space. Further releases switched to single book releases more in line with the current standard for roleplaying games.

In 2013, a new limited edition hardcover version of the rules was released for the 50th anniversary of Doctor Who. This cover had pictures of both the tenth and eleventh Doctors as well as the War Doctor. 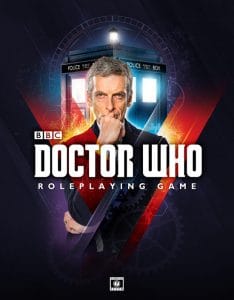 In 2015, the most recent edition of the game was released, again as a hardcover rulebook, this time showcasing the twelfth Doctor on the cover. Once again, the rules changed very little (beyond minor adjustments), but one significant change was a change in game’s name. It was now simply the Doctor Who Roleplaying Game.

Since 2012, a sizeable collection of supplements have also been released for the game, including a series of sourcebooks on each of the first eleven Doctors (no Twelfth Doctor Sourcebook to date, but that will presumably come after the twelfth’s time on the show is over). Other releases include Defending the Earth: The UNIT Sourcebook, The Time Traveller’s Companion, All of Time and Space (a collection of adventures), and several others.

The current Doctor Who Roleplaying Game has achieved much greater success than the two previous games, and this is no doubt due to the care and innovation that has gone into making it. It’s also an extremely fun game to play!

To learn more or to purchase the game, check it out on Amazon or directly from Cubicle 7’s website. All releases are available in both dead-tree and pdf format.

Dissecting the Trailer from The Last Jedi