One of the great things about roleplaying is that there is so little limiting the kinds of games you can play. While Dungeons & Dragons may be the iconic roleplaying game, its brand of fantasy is not the only style of roleplaying possible. Other genres abound, from science fiction to espionage to swashbuckling adventure, and more.

Not surprisingly, many people want to play games based around their favorite movies, television shows, or book series, and many publishers produce games to fill this niche. Naturally, Doctor Who is amongst them.

The Doctor Who Roleplaying Game (1985) 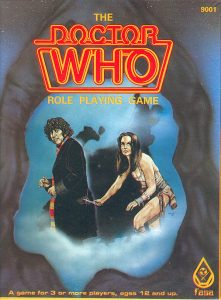 Over the years, there have actually been three different roleplaying games based on Doctor Who. The first one appeared on game store shelves in March 1985. Titled simply The Doctor Who Roleplaying Game, it was produced by FASA Corporation, and over the next two years, several supplements and adventures were released to support it.

While the game was positively received at first, over time, it gathered more and more criticism. The game mechanics were not the best at emulating a Doctor Who feel, and Time Lord characters were considerably stronger than human characters. This meant many groups experienced the problem of everyone wanting to play a Time Lord and no one willing to play human companions.

The supplements also took a great deal of liberty filling in 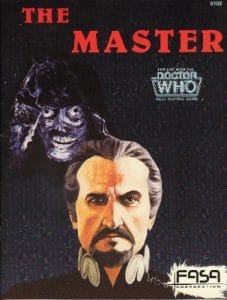 background details for things never revealed on the television show. The most infamous example of this is from the supplement The Master which detailed the Doctor’s arch-nemesis. As the television show had never provided much information on the Master’s past (other than that he and the Doctor went to school together and were once friends), the supplement made up an entire past history for him. Revealed in this was that the Monk, another Time Lord character who appeared in two first Doctor stories in the 60s (well before the Master first appeared in the 70s) and never appeared again, was in fact an earlier incarnation of the Master.

There was little in the show to support this idea, though admittedly, there was not a lot to dispute it either. Nevertheless, additions like this were very unpopular with Doctor Who fans. This resulted in the game gaining a rather negative reputation over the years.

The Doctor Who Roleplaying Game was published as a boxed set containing three books: The Player’s Manual, Game Operations Manual, and A Sourcebook for Field Agents. There were actually three editions of the game, with the second coming only mere months after the first in August 1985, and the third shortly after that in March 1986.

There were no changes in mechanics between editions, though different artwork was used for the book covers and some interior photographs. The most notable change was that the 2nd and 3rd editions removed all references to and pictures of the sixth Doctor, who was the current Doctor at the time. It’s not entirely clear why, though it would seem that FASA’s license might not have actually covered the sixth Doctor, and his inclusion in the 1st edition might have been a mistake.

Three supplements were released for the game: The Daleks, The Master, and The Cybermen. There were also seven adventures published. FASA product catalogues for 1986 and 1987 promised several more releases, though these never saw the light of day. Their licence for Doctor Who expired around this time, and FASA chose not to renew it. The fact that Doctor Who went on a year’s hiatus around the same time the game was being published probably factored into falling sales, which prompted the dropping of the license. 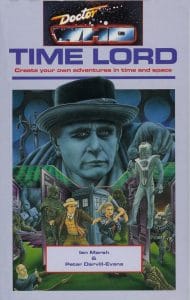 Several years went by without any form of Doctor Who roleplaying being published, but in 1991, Virgin Books (who had recently gained the license to publish Doctor Who books) published Time Lord, a new roleplaying game for Doctor Who.

Time Lord was unusual in that it contained no mechanics for creating characters. Instead, players took on the roles of one of the Doctors and his companions. The book contained prepared characters statistics for each Doctor up to the seventh (the most recent at the time of publication) and every companion to have appeared on the show at that point.

It was also published as a single softcover book instead of a boxed set (the standard for roleplaying games at the time), and was marketed alongside other Doctor Who books instead of other roleplaying games. The intention was to market the game to Doctor Who fans instead of roleplayers. As such, the basic mechanics of the game were very simple and straight-forward to make them more accessible to people unfamiliar with roleplaying.

Sales on Time Lord were poor and there were no further books published for the game. However, a single adventure did appear in Doctor Who Magazine, and in 1996, the full game was released for free on the internet. This release was updated with statistics for the eighth Doctor and the sample adventure from the original book was replaced with a new one.

The Hoper of Far-flung Hopes

After the failure of Time Lord, and with Doctor Who off the air for so long at the time, there were no further attempts at a Doctor Who roleplaying game for quite some time. However, once the series returned in 2005, it was inevitable that a roleplaying game would eventually follow, and indeed one did in 2009—one that would become the most successful Doctor Who game yet.

Sword Scrutiny: All You Ever Wanted to Know About Medieval Swords

A Video Introduction to X-Men Blue #1