Sword Scrutiny: All You Ever Wanted to Know About Medieval Swords

Clave has written before about swords in the Middle Ages, specifically those used by women. Consider this article a companion piece focusing on the most common type of sword found in medieval Europe: the arming sword.

As Clave mentioned in his article, big swords à la the beloved bastard swords and zweihänder of Dark Souls were too huge to be convenient for most medieval Europeans. While the prevailing belief is that humans of the past were much shorter and lighter than modern humans, more recent studies indicate that medieval European men were about 5’8” on average.

In other words, medieval people weren’t too short or weak to use big swords; those were just too clumsy and, well, big to be used very often by your average sergeant-at-arms, knight-errant, or mercenary for hire.

Medieval people weren’t stupid. Why use a giant, heavy sword that would be useful in maybe one of fifty combat situations? It was much smarter to have a relatively light, fast weapon that could be just as deadly as a claymore in the right hands and given the right training.

Enter the arming sword. Made to be wielded in one 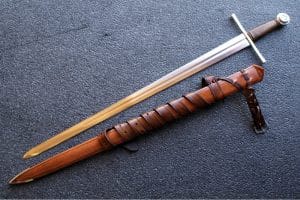 hand, their blades were about the length of a smallish modern baseball bat (around 30 inches, or 2.5 ft., long). The hilt (the handle and guard that protects the hand) and pommel (the weighted end of the hilt that prevents the hand from slipping off) added about half a foot to its length, bringing the total size to around 36 inches (3 ft.).

The pommel and hilt also functioned as a counterweight to the blade, providing balance to the weapon. The blade itself was double-edged, or sharp on both sides, adding more functionality.

In Legend and Reality

Sometimes called knightly swords today, the widespread popularity of these weapons can be measured in two ways: archaeological evidence and period artwork. More original arming swords have been found from the Middle Ages than any other type of sword, and depictions abound in illuminated manuscripts, paintings, and manuals dedicated to combat. 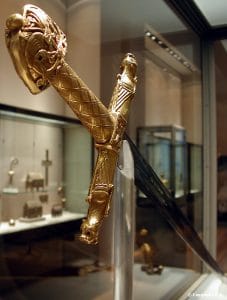 The most famous non-mythical arming sword is probably Joyeuse, which has been used in the coronation ceremonies of the kings of France for centuries and is currently on display at the Louvre. It was already in use when Philip III was crowned in 1270 and supposedly contains part of the Lance of Longinus—the Roman legionary lance used to pierce the side of Christ during the crucifixion—in its hilt.

Legend identifies Joyeuse as the personal sword of Charlemagne. It is composed of several different blades, one of which dates to the 10th century, which possibly places the legend in the realm of reality.

Most arming swords were practical weapons, simple and unadorned save for any details that a smith might add to the hilt, pommel, or blade. Blade inscriptions are the most common decoration found on extant arming swords, but they are often quite confusing and can stump professional and amateur historians alike.

In 2015, the British Library requested the help of the public in deciphering the blade inscription of a 13th century arming sword displayed in its Magna Carta exhibit. These inscriptions are most likely both a combination and shortening of known and unknown religious words phrases—stuff like +BENEDOXOFTISSCSDRRISCDICECMTINIUSCSDNI+ and +DIOXMTINIUSESDIOMTINIUSCSDICCCMTDICIIZISI+, if you want to have a crack at decoding them—rendered into medieval Latin (if you’re curious, the Magna Carta exhibit’s sword reads +NDXOXCHWDRGHDXORVI+).

Heavy or light, long or short, curved or straight, swords were a common part of everyday life in cultures across the globe for millennia. We consider them exotic and unusual nowadays, but like horses or wall-mounted telephones, they were once considered an absolutely necessary part of everyday life for many people.

While swords are rare in the modern world, they still fascinate us—whether you’re talking about Dungeons & Dragons, popular videogames like Dark Souls and Nioh, or fantasy novels ad infinitum, swords are part and parcel of the nerdish experience.