Over the years, there have been many proposed movie adaptations of Doctor Who. Indeed, there rarely seems to be a time when someone somewhere isn’t developing a Doctor Who movie. Nevertheless, none of these proposals ever get much beyond the early planning stages. A few of them get early draft scripts, but none of them ever make it to filming and release.

Except that’s not entirely true. There have actually been two Doctor Who movies, and they both came out in the 60s during the heart of what is known as “Dalekmania”. 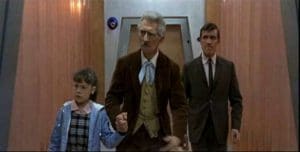 The Daleks are one of the most widely recognized parts of Doctor Who. Even people who don’t watch the show have usually heard of the metallic creatures that screech, “Exterminate!” The Daleks first appeared in 1963 in a 7-episode story collectively titled “The Daleks”. The plunger arm of a Dalek was seen in the first episode’s cliff-hanger ending, and the entire creatures were revealed in the following episode. “The Daleks” was only the second Doctor Who story ever and it became an instant hit in Britain and saved the fledgling TV series from an early cancellation.

For the next few years, Dalekmania swept across the U.K. and all kinds of merchandising soon followed, from Dalek toys to Dalek costumes. Perhaps not surprisingly, the Daleks quickly found their way into cinemas in 1965.

Amicus Productions, which was well known for horror films at the time, wanted to branch into science fiction, and so purchased rights to the first three Dalek serials from the BBC and Dalek creator Terry Nation. The plan was to produce movie versions of all three. The first was Dr. Who and the Daleks, based on the first Dalek story. The film was directed by Gordon Flemyng and written by Milton Subotsky. The movie was also filmed in colour, making it the first Doctor Who production to be in colour (the TV series at the time was still in black and white).

Of course, for a big cinema release, the producers wanted someone with a recognizable name to be in the starring role. They turned to well-known horror actor, Peter Cushing (best known today for his much later role as Tarkin in the original Star Wars film) to play the Doctor—or rather Dr. Who. Although based on a television story, the movie was not to be part of the main Doctor Who continuity and so, a number of changes were made. Most notable of these is that the Doctor in the movie is a human who happens to have the surname “Who”. Dr. Who invented a time-space machine called Tardis (no “the” like in the TV series and not an acronym of a longer name).

In the original television serial, the Doctor is accompanied by his granddaughter Susan and two human companions, school teachers Barbara and Ian. In the movie, Susan (played by Roberta Tovey) is still his granddaughter, but is much younger than her TV counterpart, and Barbara (Jennie Linden) is also his granddaughter, except she’s an adult. Ian (Roy Castle) is Barbara’s boyfriend.

The story of Dr. Who and the Daleks mostly follows the story of the original TV series, but condensed down considerably. At 7 episodes, the original serial runs close to three hours in length, whereas the movie is only 82 minutes. 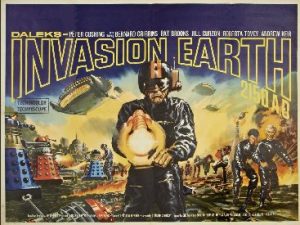 The Daleks were redesigned a little for the movie. They are taller, with larger bases and more prominent dome lights. The movie Daleks are also a lot more colourful than their TV counterparts.

Dr. Who and the Daleks was enough of a success for the second film to go ahead. Based on the television serial “The Dalek Invasion of Earth”, the second movie contains a slight discrepancy in the spelling of its title. In the movie itself, the title appears as Daleks’ Invasion Earth 2150 A.D. However, the trailers for the movie used the slightly different Daleks – Invasion Earth 2150 A.D.

The second movie once again starred Peter Cushing as Dr. Who and Roberta Tovey as Susan, but Barbara was replaced by Dr. Who’s niece, Louise (played by Jill Curzon), and Ian by Tom Campbell, a random police constable who wanders into Tardis by mistake—played by Bernard Cribbins, who nearly 50 years later, would play Wilfred Mott, grandfather of companion Donna Noble on the television series. 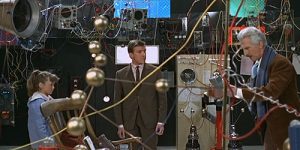 Daleks’ Invasion Earth 2150 A.D. follows the plot of the original television story, but much more loosely than Dr. Who and the Daleks did. Most notably, the romance plotline between Susan and local human David from the TV story (which results in Susan’s departure from the series) does not occur, given how much younger Susan is in the movies.

The second movie, however, was a box office failure, and so plans for a third movie based on the TV serial “The Chase” were shelved and no further Doctor Who movies were made.

Neither movie is particularly good, but they are both light-hearted fun. Indeed, they’re the kind of movies that are fun to watch because they’re bad. (RiffTrax even tackled both movies a few years back, but unfortunately, those riffs are no longer available). They are fairly short films (both under 90 minutes), making it easy to watch them back-to-back in a single session. They are also a glimpse at some of Peter Cushing’s other work beyond Star Wars, and his version of the iconic character is quite entertaining to watch.

The two Doctor Who movies will never be on anyone’s list of all-time classics, but they’re a great way to laugh away an afternoon.