Back to the valley our adventurer’s go to complete a few fetch quests in the hopes of improving their chances against the dark powers that lie ahead.  But getting in to the giants’ camp wasn’t easy, so as you can imagine…neither will be getting out.  Find out how the GCP PCs fair in Episode 106 – Choir You Hitting Yourself?

The party must return to Minderhal’s Valley to track down the missing items needed to relight the Sacred Forge, but getting out of the cathedral safely proves to be difficult. 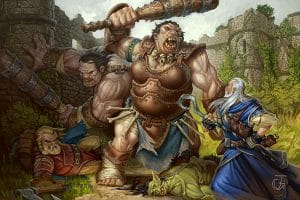 The Glass Cannon guys are playing Pathfinder, a fantastic roleplaying game that began as an
offshoot of the 3.5 edition of Dungeons and Dragons. You can learn more about Pathfinder here or get your own copy of the 1st book of the Giantslayer adventure and start a Pathfinder campaign of your own!