The Pathfinder RPG for beginners.

By Clave Jones On Nov 5, 2015 Last updated May 31, 2018
Share TwitterReddItPinterestFacebookEmailPrint

Professor: Mmmm, yes, class, for our next topic we will be discussing the Pathfinder RPG and it’s….

Professor: Uh, yes, curious and eager nerd in the back. Do you have a question?

Student: Yes Professor Boreregard von Stuffypants, my question is this: What is Pathfinder?

Professor: Ah! Great question! Allow me an opportunity give you a brief introduction! 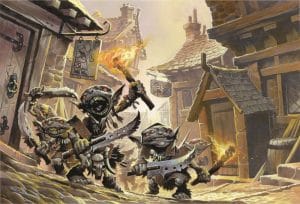 First, a little history. The 3rd edition of Dungeons and Dragons (3e) was released in the year 2000 and used an underlying d20 system that featured a system of Skills, Powers, and Feats that allowed for nearly unlimited customization of characters. Later, Wizards of the Coast (WotC) released the revised and updated 3.5 edition that featured small changes to the core game that made it mostly-but-not-entirely compatible with books written for 3e.

D&D 3.5 was also notable for releasing the d20 system under the Open Game License, which created an open source environment, igniting a lively 3rd party market of products. As a result, the game had countless volumes of books and adventures to support it.

Part of the support was with D&D’s two long-running magazines, Dungeon and Dragon. In 2002 Paizo Publishing was formed by several old WotC employees in order to take over the long running magazines. And Paizo did fantastic work.

One of the experiments that Paizo began shortly after taking over both Dungeon and Dragon magazines was a series of “adventure paths”, the first of which was The Shackled City Adventure Path set in the World of Greyhawk that provided a 12-part adventure intended to take characters from 1st to 20th level. They were incredibly well received. 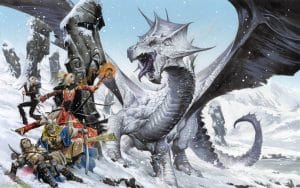 Years passed. WotC decided that they needed a new edition of D&D and created D&D 4e. Commercially, it was a huge embarrassing poo flop. Many tabletop role players rejected WotC’s new shiny, choosing instead to stay with 3.5e, an edition no longer part of the core business strategy of WotC.

But Paizo was shrewd. They had already built a reputation for writing quality material and the Open Gaming License allowed them to publish 3.5e material. So Pathfinder was born, a RPG that many have nicknamed D&D 3.75 and allowed them to overtake D&D as the #1 selling RPG. (Until D&D 5e took back the crown, letting Pathfinder settle into a strong #2 position.)

To this day Paizo publishes great RPG content that utilizes the D&D 3.5 edition rules as as foundation, but has been refined, appended, polished, and fleshed out under the Pathfinder brand. Pathfinder content is consistently well-written and it is in abundance, meaning role players can get whatever flavor they dream up, be it adventures, class books, equipment guides, or setting books.

Of course, Paizo never lost focus of its bread and butter: their adventure paths. Currently, there are probably 20 adventure paths and a new installment is published about once a month. The model is that each adventure path is written as 6 individual soft cover books that taken together forms one continuous storyline, which takes characters from level one through 20 or so. 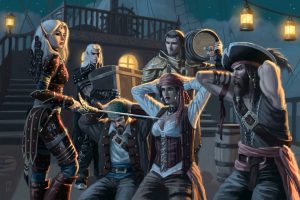 Other Pathfinder Adventure Paths are the pirate tale Skull and Shackles, the Egyptian themed Mummy’s Mask, the Asian-flavored Jade Regent, or the frosty Reign of Winter.

Paizo created Golarion as the world in which to set the Pathfinder RPG. Golarion contains immense seas and eight continents that house a diverse array of cultures, creatures, and iconic characters. Much like D&D’s Forgotten Realms, Golarion is a kitchen sink setting, meaning it collects a little something for everyone, making Pathfinder very inclusive. Whether you like ninja adventures or viking adventures or anything in between, Golarion has it. An Adventure Path has even led adventures to inspect an alien shipwreck.

What is Pathfinder and how do get I involved?

The very best introduction to the Pathfinder RPG is the Glass Cannon Podcast (start at #1, you’ll thank  me later), a treat for your ears that we’ve featured before. The Glass Cannon Podcast is currently playing through Pathfinder’s Giantslayer Adventure Path. The podcast is both hilarious and compelling, but best of all, it serves as an excellent primer for someone who might be curious about the Pathfinder RPG. 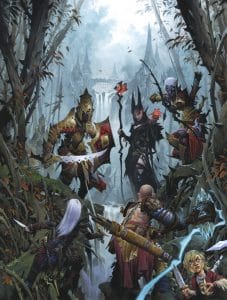 Warning, the Pathfinder RPG is not for beginner role players. Pathfinder is based on a rule set crunchy and relatively complex to begin with and after more than a decade of new source books adding to the ruleset, it is even more so. One does not simply dabble in the Pathfinder RPG. (The Pathfinder Core Rulebook is a 576-page tome in and of itself.)

The rules depth with Pathfinder comes with some perks. There is literally a rule for everything. I suspect that somewhere out there there is a rule for how to calculate the damage done to adventurers who had a blue rock fall on them on Thursday, or what you need to roll if you are crossing a creek holding a live chicken and two bottles of Dwarven Ale.

But the downside of having all the books and content available to you is figure out where to begin. Luckily, there is help here, as we have oodles of Pathfinder content. Just look around.

What is Pathfinder? Well, it’s an excellent RPG. But it’s best suited for a serious player rather than a casual RPGer. Sooner or later, the setting and storylines are just too good to overlook and will draw you in, even if you are a casual role player. My suggestion for those folks is to start with D&D 5e, but do yourself a favor and at least dabble in Pathfinder for extra inspiration and products.