Everyone knows that instead of the prequels the 90s should have brought us the Thrawn Trilogy. That should have happened. Why didn’t that happen? Possibly Cold War politics? I dunno.

The point is that the Thrawn Trilogy was a fan-favorite and critical success, and it blew open the door for books and comics that extended the Star Wars Universe, giving us fans wonderful new stories.

Alas, this Extended Universe of titles has been declared non-canonical, the slate being wiped clean to give full story freedom to Star Wars Episode VII. And I’ll be the first to admit that I’m getting old and I don’t like changes to my nerdy loves. As a result, I’ve increasingly turned to knitting, listening to angry talk radio, and slowly decaying. So my grumpy old self is giving the old Extended Universe Star Wars stories one last run before I retire them from my memory forever, replacing the stories with those that are yet to be told in this new age of Star Wars.

One old Star Wars comic run that I think deserves a last chance to shine is Star Wars: Legacy 2 by Dark Horse comics. 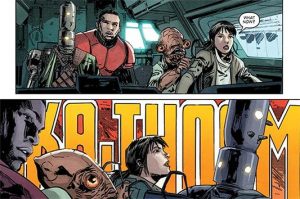 Star Wars Legacy (volume two) is set nearly 140 years after the events in Star Wars: A New Hope in a period where the galaxy is struggling to maintain a newfound peace.

The main character is Ania Solo, a girl trying to scrape out a living by salvaging junk and debris from the recently ended war. But when she stumbles upon a damaged communications droid and a lost lightsaber, she and her friends find themselves in the midst of an adventure. Ania discovers that the lightsaber is the center of an evil plot involving impostors, galactic communications, and (of course) the Sith!

The series crackles with action throughout and wastes zero time on exposition. In fact, there were times when I wish they could have spared a panel or to give a little context. Star Wars Legacy volume 2 is not decompressed storytelling, drawn out over too many issues. No, it’s action, movement, and adventure, packing a ton of story into 18 quick issues.

It’s expertly plotted by Corinna Bechko who gives it a unique and truly interesting storyline, then Gabriel Hardman fills it with beautiful, lively art. Add that up and it feel like pure Star Wars.

That said, while the story and art where top notch, it was the characters that made this series:

Get away now and hide in the outer rim if you don’t want want any potential spoilers for Star Wars Episode VII: The Force Awakens! The following is pure speculation, yet has the potential to spoil some things in the upcoming movie.

While the Extended Universe material has been declared unofficial and no longer canon, JJ Abrams and the new Disney leadership at Lucasfilm also said that they were open to pilfering certain aspects and nuggets from this material. 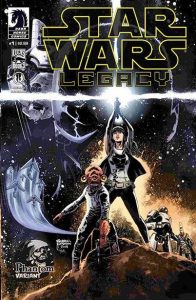 We know that the main female character (Rey) in The Force Awakens is not named Ania Solo, but it doesn’t mean that there aren’t some interesting similarities that in retrospect might make Star Wars Legacy 2 feel a little heftier, story wise.

The trailers suggest that Rey is living on a backwater Outer Rim planet where she salvages through a junkyard of downed Imperial ships. Hmm. Could Rey perhaps discover a lightsaber that connects her to her greater legacy in the galaxy?

Similarly, if you squint, the main villain in Star Wars Legacy 2 bears a resemblance to Kylo Ren in the trailor. Will the overall arc of his story match that in the comic? Well, we’ll have to wait until The Force Awakens to answer those questions.

But if JJ Abrams took a story beat here and there from the old comics or not, it won’t change the fact that Star Wars Legacy 2 was a quick, fun read.

Since Dark Horse Comics lost its Star Wars licensing rights to Marvel Comics at the end of 2014 as a result of Disney’s takeover of Lucasfilm, all 18 issues of Star Wars Legacy volume 2 are now available on the Marvel Unlimited App. You can also pick them up via Amazon.

Dark Horse Comics consistently produced some of the best Star Wars stories ever told over the past 20 years, most of them outshining the prequel films, in fact. Star wars Legacy volume II is an example of that. For me and many other fans, this Expanded Universe material is synonymous with Star Wars. Read it while you can! Who knows, threads of it might even show up in the new movies.