After last week’s stellar episode centered on Jemma Simmons and her time off world, this week return to see what happened after the attempt on Ward went bad in Agents of SHIELD episode 306: Among Us Hide

If you remember, May’s ex-husband, Andrew, was hurt in the attack at the store, directed by Ward when Hunter refused to back down. And he tells a tale of his SHIELD bodyguard taking people down and then being thrown free of the blast. He remembers that the student Alex ran. But he also appears to be healing in a relatively inhuman rate. 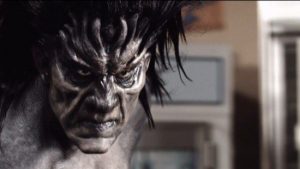 When May and Hunter have a meeting in the hall afterwards, it doesn’t go well, as you might imagine. Coulson shows up and reassigns people. May is back and is putting together the team to go after Ward while Hunter is given a side job. May then goes and intentionally picks a fight with Bobbi Morse to discover if she is ready for field work again and after proving she is, May drafts her for the Ward hunting squad.

Ward knows he needs to hunt down Alex, because Alex knows too much. It turns out that Alex runs to an older Hydra guy, who pretty quickly calls Ward and gives him Alex’s location. 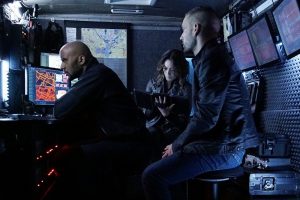 Meanwhile, Coulson is finally supposed to be getting the tour of ATCU and when Rosalind picks him up, she suddenly has an emergency. Rosalind tries to ditch Coulson but he refuses to let her, so he winds up in her house, which has just been broken into.

Coulson accuses her of staging the robbery as a way to gain sympathy from him and she accuses him of staging it to knock her off her game. In the end, they head to the ATCU with all the sexual tension of a young couple headed to prom without a defining conversation about expectations.

Hunter not being on the Ward attack team means he is a mess. First, he tries to talk Fitz into not going after Will. Next, he gets on the same team with Daisy and Mack and while they are trying to do some reconnaissance, he takes it all physical and winds up attacking ATCU’s #2, who they can take off the Lash candidate list because his blood test shows he isn’t an Inhuman.

But that does lead them to ATCU’s headquarters, where a drone deployed by Daisy shows Rosalind and Coulson arriving, and him watching as an Inhuman is some kind of stasis chamber is loaded up. Daisy is horrified at the sight and that Coulson isn’t freaking out and despite Mack’s protests about giving it a chance, it doesn’t look good. 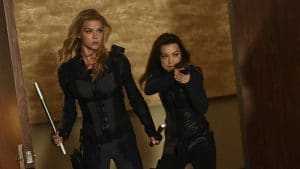 May and Morse have managed to track Alex down to Portugal after a bank heist in which Morse seemed hesitant to fight. May gives her a pep talk and when they get there, a fight ensues with Ward’s kill team. Morse has to overcome her fears and not fully healed lung when she gets in a fight in a pool, escapes and electric shocks the guy in the pool with her sweet fighting sticks.

While this is happening, May is talking to a bloodied and dying Alex, who reveals…her ex-husband is Lash! Turns out what happened in the shop was Garner transforming and taking out the Hydra assassins before the building blew up as Alex ran in terror.

And the show ends with Daisy finishing a phone call with Lincoln, who is still on the run and then bumping into Garner.

And, you may want to look away, because I am about to drop a major conjecture about the story over the rest of the season. I can’t say it is a spoiler but it feels like a strong and educated guess. So here is your last chance to look away. I am warning you.

Fitz is about to get Whedon-ed.

If you don’t know it, Joss Whedon and Whedon influenced shows have this tendency to make you really love a character and then, at the height of your love, take that character away from you in the most painful way possible.  And my guess is that Fitz will be Shield’s version of Firefly’s Wash.

This is all conjecture but here is what I think happens this season:

And we will all love/hate Joss Whedon and his disciples even more.