Recap and Review of Agents of SHIELD Episode 305: 4722 Hours

We knew that Agents of SHIELD episode 305 was going to be all about Jemma’s time off planet and how she survived. And the recap won’t be particularly long because it could easily be a run down of what she did. But don’t be mistaken; this is easily one of the top 5 episodes of this show’s 3 seasons. 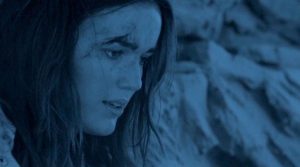 Jemma winds up on another planet and quickly realized that only very rarely is there even a sunrise. She keeps her spirits up by making notes and sciencing it up, sharing the information with a picture of Fitz on her cell phone.

But she also has the trials of solo life in an unknown world. She has to fight a pond critter with tentacles and she proves victorious in the Eat or Be Eaten challenge. She makes fire. Eventually, she is drawn into a forest of bamboo where she falls into a hole and is captured.

After some time, she gets free and learns about her captor, Will, an astronaut sent here to be the muscle for an expedition in 2001. Long and short, he failed and only he is left. He fears the dust cloud and how it warps people’s brains. And to avoid his fear, he creates a No Fly Zone where you shouldn’t go. But Jemma does, discovering a graveyard of people who came throughout history. And an astronomical device. 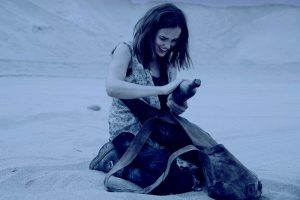 Jemma, who has pledged to be the hope while Will is the realism, manages to figure out the openings happen based on the stars and the portal essentially stays in one spot; what is moving is the planet. So with the last bit of battery from her phone that Fitz souped up, they plot a spot and want to make a break for it. But when they get there, the canyon in their way prevents them from reaching it and even their message in a bottle doesn’t make it when launched from their pressure cannon.

Stranded alone and no without hope of rescue, she and Will get together. And the implication is together together. But when they go out to see the rare sunrise and drink a really old bottle of wine they found in the graveyard of history’s explorers, Jemma sees Fitz’ flare and we know how it goes from there. Except that Will was left behind to fight off the unknown in the dust cloud so Jemma can be free.

We then learn this whole episode is her telling Fitz – in modern day – what happened. Fitz immediately jumps up and while Jemma is sure that he is angry, he shows her data that they’ll need to start Will’s rescue mission.

This is a masterpiece of television.

The only hesitation I have is how long are they going to let this plot lie. Next week seems like everyone wants to kill Ward week and I don’t see this meshing in well.

But kudos. A great episode of television on a show that doesn’t get enough credit for how good it is.