New Quest Mode missions are now available for Dragon Ball Z Dokkan Battle!  That means more dragon stones and more importantly: more bosses.  Want all the edge you can muster going in to each mission?  Tired of selecting a high level Purple ally and then finding out that the boss at the end of the level is Orange?  Me, too.  That’s why I’ve zig-zagged my way through ki and compiled this list.

This covers all of the Chapter Two missions currently available.  When new Quest missions are added, they too will be logged here, so stay tuned!

These colors accurately reflect Hard mode.  When Z-Hard mixes things up, I make appropriate notes on the ones I’ve verified myself.  Occasionally commenters will share some info too, so be sure to look down there (and contribute if you’ve got some help to lend).

A Peculiar Goku: The boss is orange, so go with red.  Commenter theOriginalERF accurately informs that on Z-Hard you face a red and a blue, so buttress your build with a blue or green. 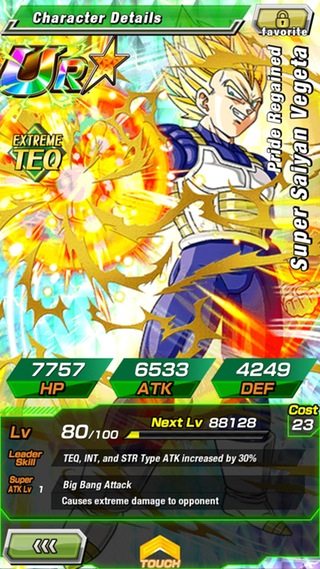 Uninvited Enemies: The boss is purple, so go with orange.

Unwanted Battle: The boss is orange, so go with red.  theOriginalERF came through again by reporting a purple boss on Z-Hard which calls for an orange ally.

Ginyu’s Big Mistake: The bosses are orange, so go with red.

Dr. Gero’s Counterattack: The boss is purple, so go with orange.

Plundered Energy: The boss is red, so go with blue.

Bloodcurdling Message: The bosses are red and purple, so choose either blue or orange; though it should be noted that you fight red twice!

Missing Target: The boss is orange, so go with red.

The Pursuit of Dr. Gero!: The bosses are green, so go with purple.

Destiny Repeated: The bosses are purple and blue, so go with orange or green.

Ultimate Weapon Unleashed: The boss is purple, so go with orange.

Intense Onslaught: The bosses are red, orange, and green, so go with blue, red, or purple; whichever your team lacks!  You have to fight red twice, and if you take the path to the right you will also have to fight orange two times.

Martial Warrior’s Offensive: The boss is red, so go with blue.

Aggressive Circuitry: The boss is orange, so go with red.

All Guns Blazing: The bosses are orange and red, so go with red or blue.

Nightmarish Android: The boss is green, so go with purple.  Once more theOriginalERF correctly notes that on Z-Hard you square off against an orange boss, so bolster your team with a red for an advantage.

In all three missions you’ll face a blue, so supplement your team with a green when possible!

Recap and Review of Agents of SHIELD Episode 305: 4722 Hours

The Coolest Card Art in Dokkan Battle (And Where It Came…