Every Dragon Ball Z fan has spent time wondering what it would be like to embody one of the characters from the hit manga and anime.  None of them, however, spent any of that time daydreaming about being Yamcha.

Yamcha is the worst.  Take it from the guys over at Giant Bomb and their excellent podcast All Systems Goku.  Even the young man who finds himself “reincarnated” as Yamcha doesn’t want to be Yamcha! 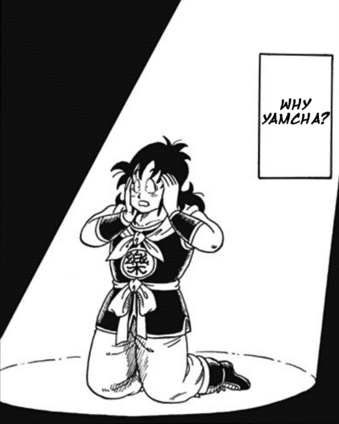 But he does try and make the most of it during the course of the spin-off manga That Time I Got Reincarnated as Yamcha; originally published in Shonen Jump Plus and now available in paperback in the US.

Making the Most of It

A male student who is a mega DBZ fan trips down a flight of stairs chasing a pretty girl and wakes up as Yamcha – really to his dismay.  Again, Yamcha is the worst.  “Making the most of it” as Yamcha means two things:

In fact, it might have been more prudent and necessary to list those two items in the opposite order.  Poor Yamcha has suffered meme-ification on the internet and even by Bandai Namco in their hit Dokkan Battle video game (referenced in the manga) as they featured a card of Yamcha in the crater as an April Fools Day gift.  There is even a statue of his corpse, yo (which I 100% want to own!).

Anyway, the student reincarnates with all of his knowledge of the events of the manga and anime, and so decides to live – not unlike Kaylee from Serenity’s ‘“To Hell with this. I’m gonna live”  and for much the same reason, really. 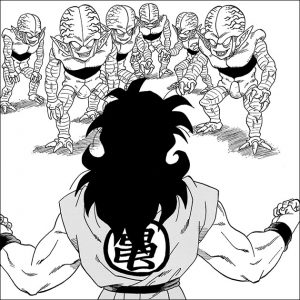 The manga touches on three arcs:  The Pilaf Arc of Dragon Ball, and the Saiyan and Cell Games (sorta) arcs from DBZ.  He ends up training under Master Roshi alongside Krillin and Goku and even traveling to Namek to have his hidden potential unlocked by the Grand Elder before Vegeta and Nappa arrive.  He manhandles the Saibamen easily enough, but Vegeta still ends up being a tag-team effort with Goku.

There are limits to Yamcha’s relevance in a fight even with foreknowledge, ha!

And the manga understands that…but that is also were it takes a very weird turn.  Instead of having Yamcha participate in the Cell Games, the third chapter reveals that Chiaotzu also has a DBZ fan’s spirit and he is looking to rise up and become a villain.  He is defeated by Yamcha who stumps him with a trivia question and they realize that the two spirits within the characters know one another in the “real world” as opponents in a video game.  It’s odd.

In the end, it turns out that Champa and Beerus arranged this whole “reincarnation” thing and pit the two against one another in a sort of VR upgrade to the two students’ real life video game rivalry.  But the third chapter does redeem itself a bit when Yamcha decides to challenge Vegeta for Bulma’s affections and gets rekt.

In the end, Yamcha’s gonna Yamcha.

Worth Adding To Your Collection? 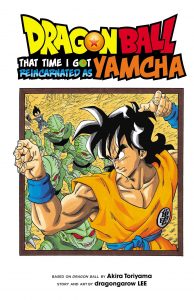 For less than $10 (currently listed for $5 on Amazon as of the writing of this post), it isn’t exactly going to break your bank.  I only snagged it because I like collecting these things and it is a fun and quirky addition to the manga I’ve got on my shelves.  Writer and artist dragonarow LEE keeps everything pretty house style; it moves and looks close enough to what Toriyama and Toyotarō produce.  The story feels like wish fulfillment and is very meta; it never takes itself seriously.  And that is why I wasn’t exactly disappointed in the book.  It isn’t a required purchase for anyone collecting the manga volumes, but it also isn’t one I’d avoid at all costs.

PS:  There is a frightening fusion of Yamcha and Chiaotzu at the very end.  It elicited a solid chuckle when in one panel they look into a mirror and in the next they’re split into their own bodies again and swear off fusion forever!

7 of the Coolest Characters from the Magic the Gathering Universe