For most of Nerds on Earth’s existence, I was our only resident Dragon Ball franchise fan.  To mention the anime in our Slack channels only invited mockery or crickets.  But I wrote about the series nonetheless because it’s dope.  I’ve done literary critiques of Z’s first episodes; blended DBZ and DnD 5e not once…but twice; pointed out that all resurrected Z-Fighters had a moral obligation to become evangelists; and even provided the internet with nifty guides for one of the mobile games.

I can’t get enough of the series, and I have a few enablers in my life who know this.  One of them, a fellow contributor to NoE, reached out to me in the early months of this year to tell me that a couple of guys from GiantBomb.com would be watching DBZ Kai as total newbies and recording a podcast with their reactions and commentary.

I needed no further sales pitch. 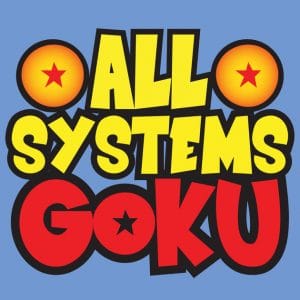 Dan Ryckert and Jeff Gerstmann sit down together for somewhere between 45 minutes and an hour to exchange thoughts on 3-5 episodes of Dragon Ball Z Kai, which is the filler-less cut of the mega-hit anime.

They both know a bit about the show and its characters by way of the Dragon Ball FighterZ game that launched early this year as well as general exposure on the internet and in general nerd culture.  DBZ is not an under-the-radar, only-the-cool-kids-know-of-it kinda anime.  It has a humongous presence; even here in the States.  But for the most part, they’re absolute greenhorns.  And that is part of the magic of All Systems Goku: It is entertaining for both the newb and the veteran.

The newbs get to tune in and see the absolute absurdity of the franchise and its characters and stories from the perspective of people who are developing their opinions as they go.  Their comments aren’t colored or biased by decades of exposure and knowledge.  They are candid and malleable…for the most part (even to fresh pairs of eyes, Yamcha is a joke).

Veterans get to listen along and laugh with the hosts at accurate characterizations and predictions that miss the mark.  We also get to have the nostalgic patina of the franchise shined up a bit as the two hosts point out the objective ridiculousness of something we’ve taken for granted at face value for so long.  It’s refreshing.

The Strength of All Systems Goku

The greatest strength of All Systems Goku is the humor, and this is facilitated by the fact that Jeff and Dan aren’t protecting anything.  To them, nothing in the show is sacred or above reproach.  It is all fair game to point fingers and laugh at.

This angle affords them honesty.  They highlight the good and the great as it comes, but they’re also quick to hit pause in some places and mock the hell outta what they’re seeing or the implications of what’s going on.  And occasionally they’ll do the latter in a character voice and it is comic genius.  Lots of straight riffing and improv between Jeff and Dan make for lots of laughs both from you and the hosts as they clearly enjoy themselves.

Whether you’ve seen it all or not a scrap, you’re going to laugh listening to every episode.

Tune In To Learn, Laugh, Or Both

If you stayed tuned to this post past the first heading, there is a very high chance that you’re going to love All Systems Goku.  It doesn’t matter if you’re uninitiated or whether you’ve consumed every piece of Dragon Ball related media even before it was dubbed – there is much to the podcast that you’re going to enjoy.

As of this post going live, they’re only 21 episodes deep so there’s not a metric ton of backlog to wade through.  As far as the timeline of the series is concerned, they just wrapped the Cell Saga and started in on the episodes leading up to the 25th World Martial Arts Tournament before Babidi makes himself known.  I personally cannot wait until they meet Buu and Majin Vegeta.  They will undoubtedly have a field day with the former, and I’m genuinely curious to see what they think about one of my favorite character moments for Vegeta in the latter.

Plus they covered The History of Trunks in episode 20 and it was downright hilarious; maybe one of the funniest yet.

If you love DBZ with all of your heart or are looking to see what all the hubbub is about, give All Systems Goku a listen, for sure!

Dungeons and Dragons: Slimes, Oozes, and other Gooey Things