This past week a DM posted saying her players were gifted with a Wish and one of them (a Level 15 Barbarian) asked for a Super Saiyan form. She was asking for advice on how to grant that wish without making it too OP. Immediately the shouts of META! began. Which is a shame because:

Now, I love me some DBZ (Check out my Krillin Way of the Sun Soul Monk build)! I gave my thoughts on how to do it and then read all the other comments (nearly 500 of them) as they came in – many with some excellent suggestions and all within the rules. Below I’ll share several variant options for a Super Saiyan build. All for funsies because I love that D&D is designed in such a way that something like this could even be considered, let alone executed.

A Creative Barbarian Build for Dungeons and Dragons 5e

Mechanically, the Super Saiyan transformation will work very much like a Rage in that you can willfully enter into and drop out of it.  However, because this transformation was not earned through training but was rather granted, it has several limitations:

This caps the max number of rounds at 5 if they want to continue living, but 6 if they want to go out in a blaze of glory!  The Training Mechanics (below) can extend the number of Rounds its possible to maintain the transformation.

In order to transform, the Barbarian would have to enter a standard Rage (Bonus Action) and then spend one Round “charging up” to the Super Saiyan form.  During this “charge up” time, they are vulnerable to attacks and must make a Con Saving Throw for each hit taken (DC is 10 or half the damage taken; whichever is higher).

In the event the transformation is interrupted, the ability to transform that day is not lost.  They just have to try again!

Because the poster’s PC was a Barbarian, I suggested that the transformation granted them an immediate 3 levels in Monk when triggered. That would give them access to Ki, Martial Arts, and the Way of the Sun Soul Monastic Tradition.

Ki and unarmed attacks are a big part of the Dragon Ball universe, so this makes sense.

The Barbarian would not have access to the Monk abilities unless transformed. They would also not benefit from any Monk Hit Dice.

A Touch of Magic

When transformed, the player would gain Flight and a Flight Speed equal to that of their base class.  They’d also gain the benefits of the spell Haste (doubled movement speed, +2 AC, advantage on Dex Saving Throws, one additional action per turn).

They would also suffer from the “lethargy” described in the Haste spell on pg 250 of the PHB when the transformation ended. So no movement or actions for one round afterwards.

If you’re unfamiliar with the Super Saiyan transformation, the character’s aura turns yellow (along with their hair). I’d slap the effects of the Light spell on him or her: They would shed bright light in a 20ft radius and dim for an additional 20ft past that.

The transformation doubles the effects of the Barbarians Rage ability. So double whatever their current Rage Damage is according to the Barbarian Table on pg 47 of the PHB and double their Resistances (from 1/2 to 1/4). 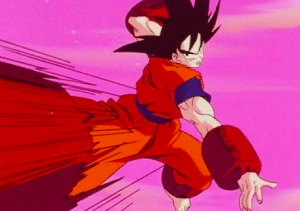 Whenever the character levels up, I’d give them the option to take a level in their “base form” or in the “Super Saiyan” form.  Base form levels up like normal with all of the advantages granted by the new level.

The Super Saiyan form grants no additional HP or hit dice, but otherwise all of the powers/abilities granted by that level are awarded to the transformed state; i.e. they cannot be accessed unless the transformation is achieved.  Additionally, every two levels taken in the Super Saiyan form would grant the PC one Exhaustionless Round in the form (always the first Round or Rounds); Max of 3 Exhaustionless Rounds.

I’m a member of several Dungeons and Dragons groups on Facebook because I appreciate having a place I can poll the hive mind, ask rules questions, talk tactics, and borrow the creativity of others. I love those groups most when someone asks for tips as they prepare to DM for their first time. Support, excitement, encouragement, and pointers are dropped in hundreds of positively charged comments.

Other times, though, some members of the community, though well-meaning, can stifle creativity with a single word: “meta.”

And it’s funny because a lot of the ruling questions get flooded with comments that say,“You’re the DM. What you say goes. Period.” And then other posts get slapped with this four letter word and it’s disappointing to see someone’s creativity get labelled as inappropriate.

We’re not talking about rules here. The worlds contained within the Dungeons and Dragons system are governed by rules, for sure. This isn’t about RAW or RAI. What its about is letting DMs be infinitely creative within those rules.

So just have a little fun with your Dragonball Z Barbarian/Monk build for D&D 5e!

This is a build I would allow at my table.  What changes would you make for this Super Saiyan Barbarian to work at yours?

Ninja Tortles? Yes, please! A New Supplement Allows Us to…