By Clave Jones On Aug 7, 2017 Last updated Jan 11, 2021
"Dice" by Gurney5 is licensed under CC BY 2.0
Share TwitterReddItPinterestFacebookEmailPrint

In 2005, Matthew Mercer became so frustrated with the rolls of his dice that he ground them into powder and shot them out of a confetti cannon at a One Republic concert. This is a story that is 100% untrue, but we can all understand the emotion of it, so it sounded 110% plausible.

That’s because we all have weird superstitions about our dice. Our thinking about dice has the statistical rigor of Dr. Bunsen Honeydew and Beaker. Maybe Animal.

Us nerds fancy ourselves as such rational beings, yet we’re loony when it comes right down to it. We eschew the wisdom of Ockham, so instead of accepting the reality that our dice rolls really are random, we leap into crazy conspiracy theories on a level that would give even Alex Jones pause. 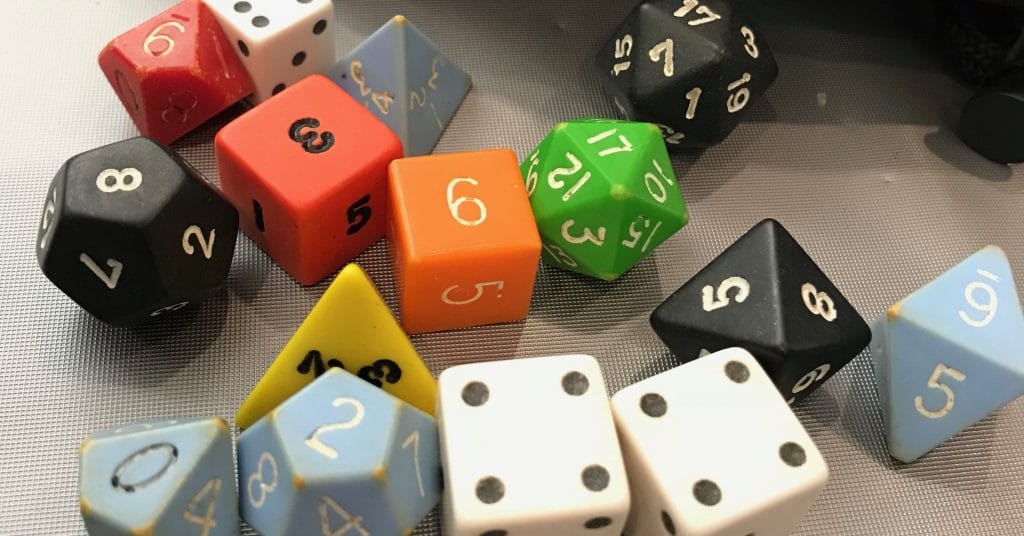 1 Never allow anyone to roll your dice.

Many people are very serious about this. Very serious.  Because lord knows that if that person across the table is rolling cold, then her bad juju will rub off on your dice and…..uhhhhgggg, I can’t even deal with that possibly.

2 Always arrange your dice with the lowest number facing up.

Duh, this is obvious. If you arrange your dice with the lowest number facing up then it forces the bad rolls out of the dice, meaning that there is nothing but high rolls left.

3 Always arrange your dice with the highest number facing up.

Duh, this is obvious. If you arrange your dice with the highest number facing up, it “locks in” that high number, assuring you roll nothing but magic.

4 Always test your dice before the session.

If you have multiple sets, the sensible thing is to roll each of them a few times before the session even begins. Note the one that rolls the best and use that during the session because clearly that die IS EMBUED WITH MAGICAL FIRE.

I’m guilty here. When I roll for a spell that’s a little “frosty”, I’ll typically use my frosted or clear dice. And I have orange dice for “fiery” spells of course. I’m pretty sure that keeping with the thematic coloring helps me with my damage rolls, but that’s probably because I’m a crazy person.

Truthfully, at a few years past 40, I typically roll dice that I can actually read, meaning the specific dice I had for specific occasions might need to be replaced with light colored dice with dark numbering.

6 Believe that a particular die is magic.

Sometimes a single die can earn the reputation of being “lucky.” Once folks around the table have determined that a particular die rolls hot, then that is certainly the die that is used for all the important rolls.

7 Don’t roll your dice before the session because you’ll use up all your good rolls.

Assuming like crazy people that there is a finite number of natty 20 rolls rather than a 5% chance of a natty 20 roll, you’d be a fool to use up those finite good rolls before the session. Save them for combat, nerds.

Related, never use up a natty 20 roll on something like a darned perception check or whatever because c’mon, man, that’s a waste of a roll.

What did we learn here? That we’re are just a bunch of looney birds. But who cares? Rolling dice is fun and holding on to silly superstitions gives the game whimsy and adds laughter. That’s not a bad thing.

So what are your dice superstitions? Jump over to our Character Sheets Facebook Group and share them with that growing community!