When I first came to gaming, it was around three main axis. The first, the fantasy world of the stories I was reading, like Tolkien; Dungeons and Dragons scratched that itch. The second was around the superheroes I loved of the Marvel universe and the FASERIP game was outstanding for that. The third and final one made sense for any 14 year old who was desperate to get their license and get out on the open road and Steve Jackson’s Car Wars scratched that itch.

Nerd Nostalgia: Looking Back at Car Wars, an RPG Classic 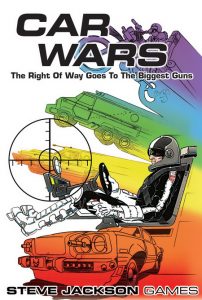 Car Wars was, at its core, a combat game where each player put together a car and they held autoduels. But Steve Jackson and company were also careful to put together a backstory that allowed for some compelling stories told in their world.

That backstory was started in the early 1970s with an Alan Dean Foster short story called “Why Johnny Can’t Speed”, which Steve Jackson has pointed to as an inspiration. By taking the energy crisis of the late 1970s, the Cold War that was prevalent at this point and Mad Max, you wind up with the basic premise of Car Wars.

Set in what was then a dystopian future, marked mainly by the succession of the Free Oil States (Texas, Oklahoma and Louisiana) succeeding from America and then a world war where nuclear weapons were used but largely stopped via anti-missile systems. Chaos resulted and the world dropped into a sorta of modern day wild west, with the plastic plated cars driven by electric motors being used to create the new bloodsport of autodueling. 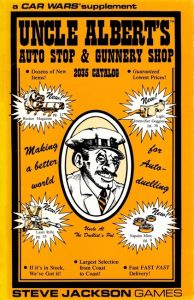 The basics of the Car Wars game was that characters would be able to use the basic sets of rules, a cost table and build out their ideal autoduel vehicle. As you can imagine, every vehicle type, gun type and accessory had some pros and cons. You might build out a trike, loaded with armor in the front with a bumper trigger on the largest gun you could imagine and drive into your enemies.

Or, you might build a large van with a turret and dual machine guns and armored to the point that you would survive several direct hits. The fun of the game was that you could build out a perfect vehicle for your style of play and use it in any kind of autoduel.

For a teenage boy and his buddies, you could spend every summer day making a build and fighting it out in the various street maps or arenas that could be purchased or created. The first simple game came in a box and was released in 1980 to great acclaim. As the game grew in popularity, more and more versions or upgrades were went, moving to more and more well produced pieces.

Because of the simple nature of the game, they were able to release updates via things like the AADA Vehicle Guides or the Uncle Albert’s Autostop and Gunnery Shop catalogs, always set 50 years in the future from when they were released. The game waned in the 1990s and Steve Jackson Games eventually quit producing the game, instead pivoting to a card version of the game that I have never checked out. 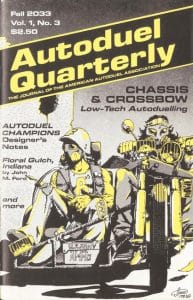 But for the real enthusiasts of the game, one of the things Jackson authorized that was a lot of fun was the American Autoduel Association or the AADA. You could join it like any club and, along with your membership, you would get quarterly issues of Autoduel Quarterly. (They are available online from Warehouse 23 as pdf files as well as other important parts of the game.)

In addition to the short little adventures or arenas that you would expect, the journal also had some really interesting and creative short stories. The world of Car Wars really came to life when you could read of the exploits of the hero in the maxed out speed car, hired to protect the convoy from the evil sheriff that would steal their cargo as it raced through the American south.

The combination of gameplay and replayability along with the Autoduel Quarterly made Car Wars one of my favorite games of my earliest gaming years. Thankfully, Steve Jackson Games has reprinted the basic core system and you can buy it online here.