I have a nerdy confession. I pretty much just play Dungeons and Dragons. I mean, I have expanded out over time, because who wouldn’t jump on to the Starfinder wagon?!? But, other than that, I am pretty stuck in an RPG rut.

And it was in looking for a Dungeons and Dragons game that my friend and I stumbled into the Atlanta Gamers Guild monthly Intown RPG day. But, the spots were all taken and I didn’t bring my stuff to spin up another table, so we decided to jump into another game.  So, for the first time I got to play Index Card Roleplaying Game, published by Runehammer Games.

We had a great DM who was pretty quickly able to get us all up to speed. It is a d20 based game with skills, abilities and statistics but it is pretty simple in how those things are mapped out and laid out. We took on pregenerated characters and pretty quickly were off into an adventure, albeit one that ended in a total party kill  (TPK). 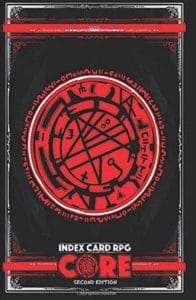 And I have to say, I really enjoyed this game! Enough so that I pretty quickly went and ordered the core set and some of the supplemental sets. I have been looking for a way to teach some of my co-workers some of the basics of D&D style games but we generally only have an hour at work to play at lunch so it has been daunting to figure out how to do that. Index Card RPG may be a perfect entry level game and here are some of the reasons.

First, it is simple. It has just enough complexity that it isn’t boring but it also isn’t very rules heavy. Classes, armor class, weapons, etc. are all kept to a minimum. The basic dynamic of the game is there is a base target number you are trying to beat. If something is really hard, that number goes up 2-3 points and if something is really easy, it comes down 2-3 points.

With a quick 5 minutes primer and some dice sets, I think you could match up players with pre-generated characters and start playing pretty quickly. 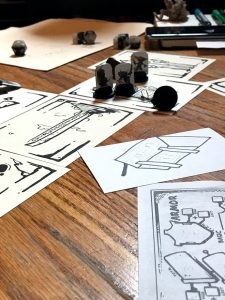 The index card part. Rather than using a battle mat, where a square equals 5 feet, etc., this game uses zones that are designated by index cards. If you are in the same zone as a creature, then you can melee attack it. If you have a short bow, you have a range of 4 zones.

Different zones have different characteristics and represent different things. In our game, we had pre-printed cards that come with one of the sets. So we had a river area, the woods, the swamp, a goblin base made out of an overturned wagon and an obelisk, which is something that I am convinced only exists in DnD games.

It is just a really good, simple mechanic that I loved. Quick to explain, a good visual demonstration and easy to play.

The versatility. We played in a fantasy game with a crew of goblins and an ogre. But the mechanics would easily be adaptable to another setting, Runehammer Games sells a fair number of maps available for download through DriveThruRPG.com and those cards could be used in a variety of ways.

In addition to the core rules, there is also a World Pact that unpacks a specific setting but also could have implications in creating new versions of this same game. (For instance, I am now itching for a gunslinger story using these rules.)

So, though I went in and was looking for a normal D&D game, I am thankful that I wound up playing Index Card RPG. It is a simple, fun, quick and versatile game that I think could be a great entry point for people wanting to learn about and experience their first roleplaying game. It is definitely worth checking out.

Top 7 Board Games My Wife Likes