One of the things that happens with a tabletop roleplaying group that has been together for a long time is that you get into patterns of unspoken expectations. That just makes sense; as you play together, you develop patterns. But in order to keep intrigue alive in your sessions you need to mix it up sometimes.

If I could offer a tip to all DMs, it would be this: not everything has to be what it seems and you should occasionally subvert the unspoken expectations that you all have. What they think is happening and what is actually happening don’t have to be the same thing.

DM Tip: Deliver (Or Roll With) The Unexpected 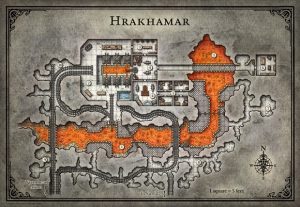 I am honored to be the Dungeon Master for a Monday night group where we are currently playing through the Tomb of Annihilation.  A few weeks ago, my PCs entered into Hrakhamar, a former dwarven forge in the southern mountains of Chult, where they have been “contracted” to clear it of firenewts, who have overrun it and taken control of it from the dwarves.

After being caught off guard by the revelation that one of the characters could now cast gaseous form and the PCs did a pretty significant reconnaissance work of the first half of the map, it appeared like it was going to be a pretty simple, straight ahead combat, with the players having the information on numbers, headcounts, weapons, etc. When the combat began, it didn’t take long before a firenewt went down and I said something like “A puddle of fiery magma is in the spot where he was.” 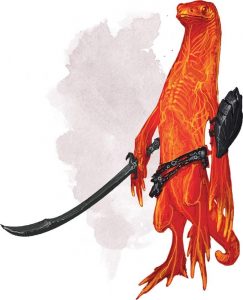 Now, what I meant as a throwaway description of what happened for whatever reason piqued the players’ interest. There were suddenly very concerned about this puddle. Those questions triggered my DM devious brain and I quickly threw out a marker for the puddle. Combat continued and at the top of the turn of the firenewts, I had the puddle move towards the large forge one square. And it broke our game in a good way.

Truthfully, the PCs were more than powerful enough to deal with the firenewts, especially with the recon information they had. But with the advent of these lava pools popping in each place where a foe was fallen, the characters began to burn through a lot of turns to try and extinguish the puddles and had to be very creative.

I have never said “Roll a percentage to see how full your bladder is.” before! But in addition to defeating the combatants, they felt like they had to deal with the combatants’ remains as well.

The larger principle at play is an important one: throw something different at the PCs to catch them off guard. In this case, something simple like a moving pool of magma from a defeated foe makes the encounter more interesting, harder in terms of completing the task and it was all built on a false sense of dread. My intention wasn’t to have anything happen at all should the puddles have made it to the forge, but my players were certainly concerned about what might happen.

Some common ruts to guard against are things like only showing and using maps when combat is forthcoming. Sometimes you should use a map with no intention of ever having a fight happen on it; conversely, do an occasional theater of the mind combat round and don’t use a map at all. If your game is in a place where encounters feel stuck, think about what is the little extra twist that you could add to the session to catch the players off guard and have them approach it differently!

What ideas have you used in your game to mix up the expectations that you and your players have? How has it gone?  Let us know in the comments to this post on our Facebook page, or drop in to the Character Sheets group (we’ll totally add you!) and post your thoughts to begin a discussion with the community!

Nerdy Hooks: Becoming One of Us Has Never Been Easier