Tomb of Annihilation is the newest D&D adventure. But while it is set in the familiar world of the Forgotten Realms, Tomb of Annihilation takes place on a secluded peninsula called Chult. Chult is Heart of Darkness meets Indiana Jones meets Land of the Lost, and is filled with wonderful African inspiration, forbidden cities, roaming undead, and, yes, lots and lots of dinosaurs. 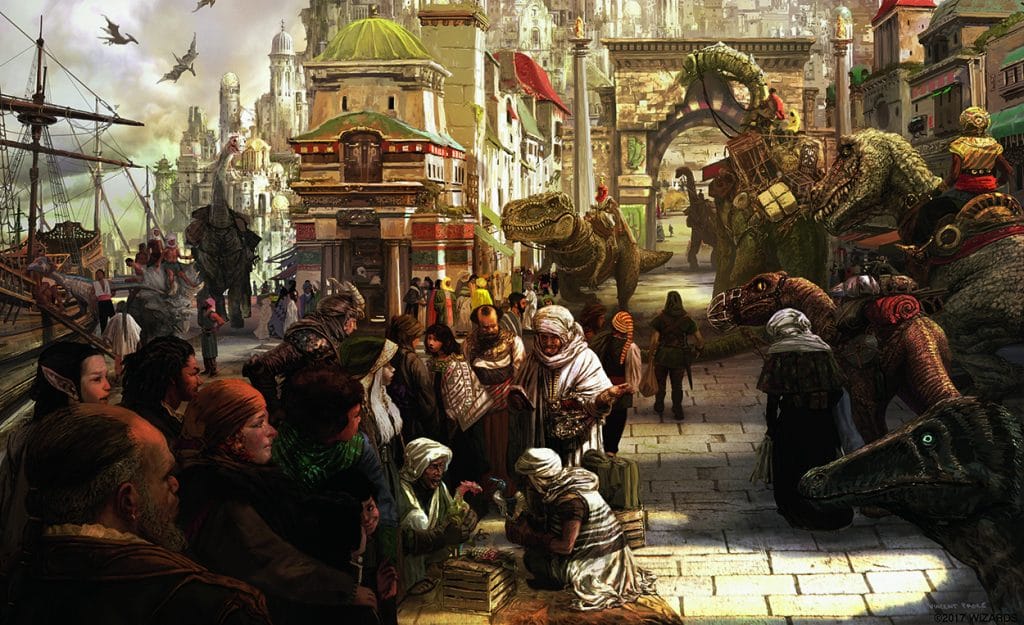 Designed to take characters from levels 1 through 11, Tomb of Annihilation is a 252 page hardcover adventure that is split roughly into two halves. Early levels introduce adventurers to Port Nyanzaru, the only real port in the entire region. It is home to Merchant Princes and, yes, dinosaur races.

But the adventure coaxes players out of Port Nyanzaruand onto an arduous trek through the dangerous, disease-ridden jungles of Chult. This is designed as a “hex crawl”, an area-by-area exploration of the map that might uncover hidden ruins, quest-giving NPCs, deadly foes, or simply have the characters die of dehydration.

The hex crawl leads the adventure to the second half, which is an intense dungeon crawl into a tomb of horrors designed by Acererak, the dastardly lich of Tomb of Horrors fame. Should the adventurers make to the end, they may be able to thwart the Soulmonger, a necromantic contraption that sucks up souls.

If that sounds awesome to you, then you feel about Tomb of Annihilation the way I do. I’ve read the entire adventure cover to cover and have spent a full week collecting my thoughts on ToA, the newest D&D adventure. It does so many things well.

Tomb of Annihilation is the most flavorful D&D 5e adventure yet. Fantasy is predominately Middle Ages Euro-centric tropes, with the predominant inspiration being Tolkien imagery and ideas. While we love this, I think most roleplayers agree that we’re ready to have some more color in our games.

During my latest trip to the African country of Burundi, I stood on the shores of Lake Tanganyika and looked toward a gorgeous jungle vista in the Democratic Republic of Congo. It was breathtaking. As I read through Tomb of Annihilation, my mind was transported back to Africa as I read page after page that dripped with an homage to some of our world’s most beautiful landscapes and cultures. Chult is part of the color that D&D needs.

And it has dinosaurs. We don’t play roleplaying games as an exercise to replicate the real world, so I loved the fun, gonzo elements that were interwoven into the adventure. Sure, I hear Chultans with a Congolese accent in my head, but that merely served as a jumping off point to populate Chult with flying monkeys, slingshotting goblins, killer frogs, and a T Rex that barfed up zombies.

In addition, the story weaves evocative and quirky NPCs that add additional flavor to the adventure, as well as drop bread crumps for future stories. The whole adventure has a wonderful Indiana Jones feel, making each and every participant feel like heroic archeologists.

Tomb of Annihilation will break you out in a sweat. No, really. There are rules for diseases that the player characters will get if they don’t take care in the jungle exploration aspects of the adventure. And there is no Target in the jungle, so inventory management is a vital aspect of the campaign. Yet the rules are simple, elegant and don’t require onerous bookkeeping.

The final dungeon is intense. It is unbelievably deadly, as it’s littered with traps and heavyweight monsters. And to its benefit, it’s not capriciously designed like Tomb of Horrors, it’s clever and creative.

It’s 5 full levels, plus boss fights on the 6th. As I was reading through it, one small nugget caught my attention. There is one tiny room on level three that the adventure says the dungeon guardians and caretakers have forgotten. I can imagine the players coming back to this room time and time again, dropping into a heap in the corner, sobbing uncontrollably over the memories of the deadly traps and foes they encounter in this epic final dungeon. It’s a brutal and unforgiving dungeon.

But that isn’t to say that is doesn’t have moments of mirth. A conceit of the adventure is that Acererak has trapped the spirits of nine trickster gods in the dungeon. These trickster gods bicker over inhabiting the player characters and add a welcome touch of silliness to the adventure. 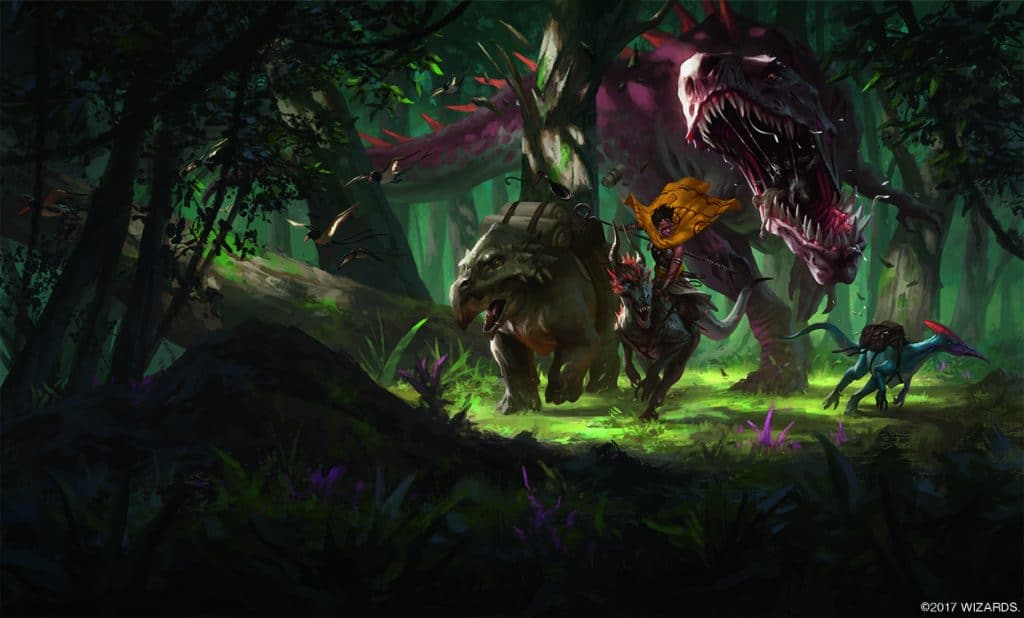 Tomb of Annihilation has some stumbles. Players must find the lost city of Omu, the race against the Red Wizards of Thay to beat them to the puzzle cubes of the 9 trickster gods. Omu is wonderfully designed and the experience has a wonderful cat and mouse feel.

But instead of then moving to confront Acererak, the adventure requires players to instead tackle a Yuan-ti temple and that dungeon is pretty boring unfortunately. Worse, it kills the flow. When players are just about to drop down into an absolute meat grinder of a dungeon, don’t force them into a pre-dungeon for no good reason.

The pages spent on the Yuan-ti temple would have been better spent in further fleshing out the wonderful locales of Chult. As it is, dungeon masters will likely need to look to third party material for help, most likely on Wizard of the Coast’s DMsguild.com, but content created for that site is notoriously hit or miss (mostly miss). 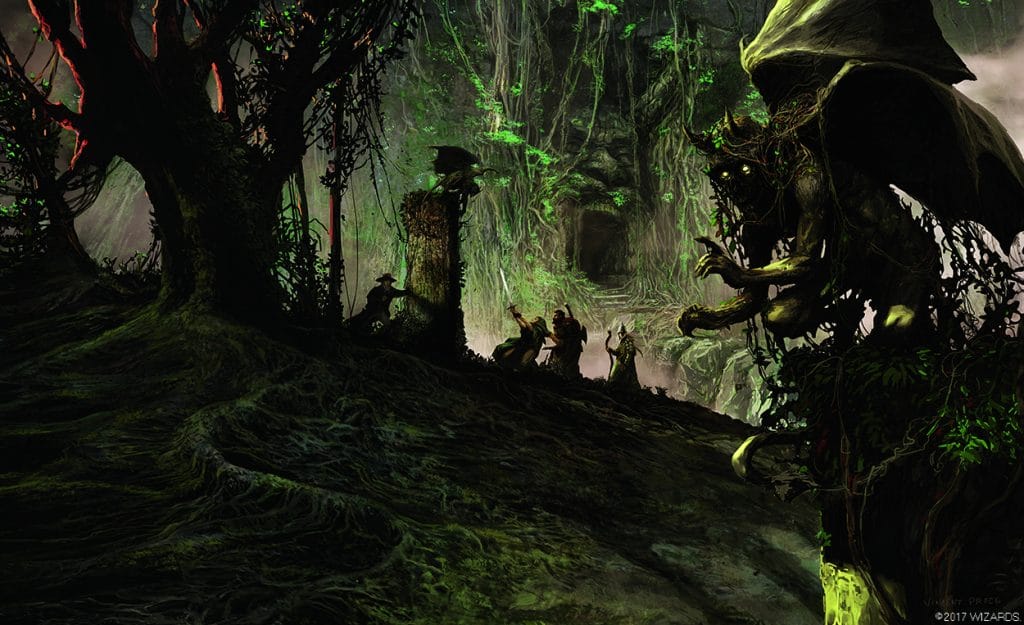 The bottom line: Tomb of Annihilation is EXCELLENT overall. I can’t imagine it not rocketing to the top of most player’s wish list for their next campaign. While the unfamiliar locale might heap a little more prep onto dungeon masters, it’s the unfamiliar locale that is the true star of ToA.

And while I was a little apprehensive about WotC leaning on nostalgia for Acererak, I must say that the way he was written into the story was masterful. His boss fight and the 6 levers of dungeon that lead to him will create vivid and memorable experiences for players, provided they live long enough to even make it there.

[Disclosure: Wizards of the Coast provided Nerds on Earth with a copy of Tomb of Annihilation for review.]

D&D in a Box: Review of the Tomb of Annihilation Board Game