The Arthurian Legends are hard to miss in pop culture.  Chances are extremely high that you’re familiar with the concept of the Knights of the Round table, can name a couple of said knights, and have encountered some franchise that borrows from their legend (possibly Disney’s The Sword in the Stone based on TH White’s The Once and Future King or Monty Python and the Holy Grail).

Now Italian game designer Mario Papini and Wizkids Games have brought the Knights of the Round Table to…erm…your table…with Lancelot:  A board game in which 2-4 players race to become the most virtuous in all of Camelot and be elected Lancelot, the First Knight.  (And the irony of the fact that the most virtuous knight later goes on to have an adulterous affair with King Arthur’s wife, Guinevere, is not lost on the game’s instruction manual!)

There are a lot of bits and pieces to Lancelot: 85 cards, 113 cardboard tokens and tiles (not counting 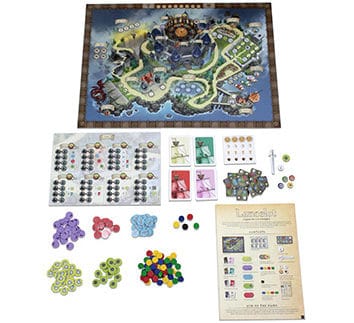 the game board or Virtues board), and 57 small wooden cylinders to be exact.  There are also stickers which must be affixed to several of the wooden cylinders – a step I always dislike.  The process for this game, in particular, was made even more tedious by the curious decision to have the stickers punch out of their sheet much like the cardboard tokens.

The cards have a side featuring colored sails while its opposite depicted a beautiful illustration.  There’s no indication in the instructions which is face up and all cards of each color (pink, green, red, and white) are identical, so I’d recommend using the colorful side only to pair them with the appropriate ship on the board.  That’ll leave the amazing art face up for all to appreciate, as that certainly a) is the intention and b) is an improvement over the mundane sail side.

Another thing Lancelot‘s components do well is communicate the conditions for obtaining the Virtues and Deed Tiles pictographically in a way that is simple and easily understood.  You don’t have to have a history in cryptography to sort out what you need to do; a problem I’ve encountered in many tabletop games.  The same is true of the symbols on the game board itself, which also features solid art.

Stickers aside, my only other wish is that they’d included a couple more bags for components after the cards are unwrapped and the cardboard bits are punched.  You saw those numbers above.  That’s a lot for the two included baggies.

Lancelot takes place over the course of eight turns.  Each knight moves clockwise out of Castle Camelot, stopping at any one of 10 stations to collect the items necessary to obtain Virtues or Deed Tiles before returning to the Round Table.  Once all knights have returned to the table, the next round begins.  The player with the most Virtue Points (but not necessarily Virtues) at the end of the eighth round wins!

Virtue Points are scored by:

Players must progress in a clockwise motion around the board and cannot ever go backwards!  You’re free to make as many stops as you’d like before returning to Camelot, but don’t dawdle too long if the rest of the knights zip right on through.  For two reasons:

There are all kinds of strategies available to the players, and I love that.  It didn’t seem like there was a single winning formula evident as we played.  We each set about a different tactic (independently and organically) and stayed reasonably close to one another in VP…with the exception of the points gained from the Grail track, but more on that later.

The trickiest bit of strategy is deciding when to cash in your Morgana counter, which allows you to make a second trip around the board before returning to the Round Table.  Doing so is an obvious advantage when it comes to resources and Virtue obtainment, but it also allows other players to move well ahead of you on the Grail Track and potentially claim the advantage you need from the Round Table ahead of you!

I chose Arthur’s seat a lot early on because it let me move first and it allowed me to choose a different Virtue each round that I could earn a few extra VP from upon completion.  I never visited the Lake for Excalibur or stopped at the dragon to cash in tokens for Deed Tiles.  Instead, I tried to starve the market of swords by hoarding as many as I could get my hands on in an attempt to limit the chances of others to collect Deed Tiles (while also ensuring an extra 2 VP for me at game’s end)!  And I would have won, too, if it weren’t for that pesky Grail track (still further below)!

Like the knight of legend, Lancelot does have a couple of issues.  We felt like the instructions were either incomplete or unclear with regards to the Dragon area on the map.  We debated back and forth on two questions:

And the Grail track is bonkers if you get just one player who decides to ignore it.  The whole table better be onboard about keeping the distance close between first and last on that track, or the points add up fast.  The guy who won our play through did so on the Grail track, scoring a dozen or so VP in the end because one guy decided to ignore the Grail track almost entirely.  In a game where most of your VP scores come 1 to 7 points at a time, that’s a lot.  It was easily our least favorite element of the game.  Cool thematic tie, but its too easy to have it derail the balance of VP acquisition. 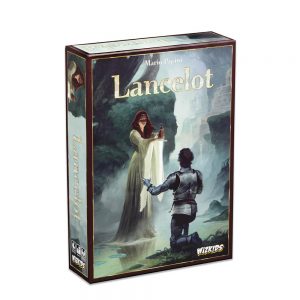 Lancelot is a solid game.  We ultimately enjoyed the heck out of it!  It was simple enough to pick up, yet had a depth of strategy that adds to its replay value and experience.  The eight turn limit felt just long enough to obtain several of the Virtues while avoiding feeling overly long.  The advantages provided by the seats at the Round Table open up all kinds of strategies while simultaneously posing a potential threat to any working strategies you might have.

Enjoyable, dynamic and numerous strategies, and replayable, the issues we experienced won’t prove near enough to have this game collecting dust on a shelf.  I give Lancelot 8 out of 10 Nerds.  You can snag yourself a copy of this Arthurian themed board game from Amazon today!

[Disclosure: Wizkids provided Nerds on Earth with a copy of Lancelot for review.]