You gotta know when to hold ’em

Know when to fold ’em

Know when to walk away

Know when to run

But hey:  Cat Benatar lives to initiate another music drop another day.  What lies in store for the GCP crew in Episode 140 – Toad to Perdition?  Find out today!

The party arrives at the base of the mountain where Skirgaard appears on their map, but the ascent to the plateau is more treacherous than it appears. 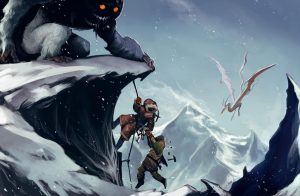