Trade School is a series in which we want to bring to you graphic novels, either collections of series or all new original material, that we think a nerd like yourself should know. Today’s topic is Jeff Lemire’s Roughneck.

Gallery 13 to the Rescue 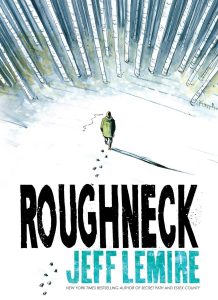 Now, we have written about Jeff Lemire before as a creator that we think you should know and also about his wonderful series Essex County. While most people know Lemire now as a writer, he is an artist as well, having done work for both the major publishers, as well as with Image Comics. But in this project, Lemire returns to his roots, both writing and drawing a story set in the Canadian landscape that he evokes so well.

This title was the first purchase of the Simon and Schuster imprint Gallery 13, which seems to be focused on printing original work by creators, both famous and newcomers, that won’t fit inside the normal scope of the 2 major superhero publishers. Whereas previously a title like this might have found some life on DC’s Vertigo imprint, with that imprint effectively having closed shop, there is a niche that Gallery 13 seems to potentially be seeking to serve.

The main thrust of the story centers around former hockey player Derek, whose career ended violently. He is living a life that seems to be content with drinking and fighting until his long lost sister shows up. From there, we get an intricate story of family, responsibility and, possibly, redemption. 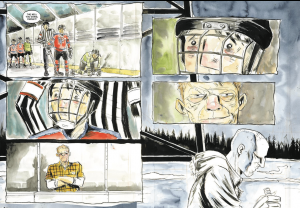 Lemire’s artistic style thrives with the minimal style he uses. Whereas Essex County was a colorless book, Roughneck uses a simple white, black and blue palette with red occasionally used, except for flashback sequences where we get full color artwork as the main character remembers segments of his earlier life. It is an effective use of minimalism in style and color to convey much more.

Emotionally the book is meant to evoke a sense of desperation in the current parts of the story. The people that are at the focus of this book have long ago moved to the outer edge of society, as a part of the world that barely holds on deep in the frozen winter tundra of Canada. 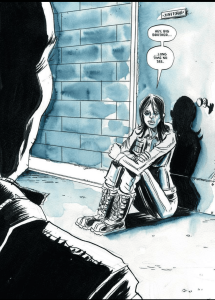 The other theme that shows through is the sense of responsibility and family. The family idea is not a surprise; much of Lemire’s work from Essex County to Sweet Tooth to the current Black Hammer series has a thread about belonging and what that belonging requires of us. The main character is drifting away slowly in some ways until the arrival of his sister; that change quickly moves Derek to a new place, where he has a new filter to run things through.

One of the things that is odd about the story is that it has a comic book’s pacing. While maybe this was a series or mini-series that Lemire was pitching to the comic book world at large, as far as I know, it was never published as such. There are clear moments in the story where we can feel the break of the story; the would-be cliffhanger that is meant to hook the reader for the next episode. In this long form graphic novel, they just feel like odd placeholders.

None of which should diminish this book or your willingness to pick it up. Roughneck is a great example of a creator using the full array of gifts that he has to create a meaningful, rich, emotional work of art. Even if you have never read anything by Lemire, this book is a worthy purchase either in printed form or available from Amazon in a Kindle format.

Wizkids’s Team Play: A Pick Up and Play Gem