Wizkids’s Team Play: A Pick Up and Play Gem

I don’t know if this is true of everyone, but my earliest gaming experiences tended to center around cards.  Games like Go Fish, Uno, and Memory come to mind.  Nostalgic and simple, those games endure both in production and in my memory.

Just looking at the packaging of Wizkids’s Team Play elicited those same feelings of familiarity and comfort.  I knew it would have a tiny learning curve (if any) and play relatively quickly (box suggests 30 minutes), so I took it with me to a tabletop gaming day.  I figured that if nothing else, it would serve as a welcomed brain break from the standard fare of those gatherings; games that tend to have lengthy instruction manuals and lots of moving parts.

It nearly stole the show.

Team Play is licensed by Wizkids from Schmidt Spiele games out of Germany and was originally designed by Johannes Schmidauer-König. 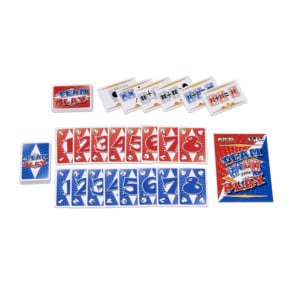 There is little to the physical components to this game; just a box, a short set of instructions, and 110 cards:  four each of the numbers 1-8 in both red and blue, and 46 mission cards.

But every component has an obvious quality to it.  The box absolutely beats the heck out of the packaging for any of the other card games I own.  It feels substantial instead of like a larger version of the flimsy cardboard container in which most poker cards come.

The cards felt pretty standard in the hand.  Nothing to write home about there, but also appreciable.  I’ve certainly held cheap cards, and these were not that.  I mean, its meant to be played a lot.  Too high a quality in the card would feel misplaced.  Too low a quality and the cards simply wouldn’t hold up over time.  These strike a nice balance.

Play requires as few as three and as many as six players.  3 or 5 players will compete individually while the even numbers will break into teams of two and play cooperatively.  Co-op is 100% where the best this game has to offer resides.  It is called Team Play after all!

You and your partner will race other teams to be the first to complete eight missions.  The mission cards display the components needed to earn the Victory Points represented on their face.  You’ll encounter pairs, sets (3 or 4), and sequences (like a straight in Poker) as well as sums (2 or more cards that added together equal another) and even/odd groupings. 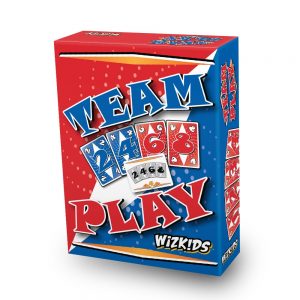 Each player will have one mission card face up in front of them that only they can complete.  And there will be yet another in the center of the table that is up for grabs to the first team able to meet its condition.  Anytime a mission is completed, it is replaced by another from a draw pile.

The cards in your hand can be supplemented to achieve those missions in one of three ways:

You’re not allowed to talk to your partner about what either you or he/she needs during play, but attentive play will ensure useful shares!  Keep an eye on their mission and what cards they’re passing to you or drawing from those lying face up, and you’ll lend all the right kinds of aid.

After either team achieves their eighth mission, everyone gets one more turn to try and score a few last Victory Points before they’re totaled and the winning team is revealed.

Gameplay moves pretty snappily even on the first play through, and there is a good balance struck between speed and points.

Anytime a player draws a new mission card, they have the option to discard it and replace it with another which must then be played.  So you can hold out hope that you can net the 6 point mission after a few rounds, or you can zip through a few 1-3 point missions to try and obtain the eight required to bring the game to an end while your opponents only have 1 or 2 missions banked.

Are you going to race through the missions and hamstring your opponents, or will you bury them under a mountain of Victory Points?  Ultimately your strategy is going to rely somewhat on the luck of the draw; both of the mission cards and your hand cards.  And I dig that!  Like most great games, Team Play will likely have you revising strategies with every turn.

Team Play‘s co-op mechanics are fantastic and the short duration of play gives it a huge leg up over games like Phase 10.  The ease of play makes it such that you could leave it unattended on a table at a party and folks wouldn’t need a seasoned player to walk them through it.  They’d be playing competently in minutes; even the young ones!

This little game packs a big draw.  Nostalgic, accessible, replayable, and entertaining, it hits all the right notes!  If today’s plays were any indication, it will be one I’m requested to bring with me to future tabletop parties due to it’s killer combo of simplicity and fun.

Depending on when you’re reading this, you can either preorder or purchase Team Play from Amazon here.

[Disclosure: Wizkids provided Nerds on Earth with a copy of Team Play for review.]

A review of Stuffed Fables, the new board game designed for parents to play with their children.

To Stealth or To Stab? That is the Question in the Kodachi…

Review of Chiyo’s Secret: A Board Game of Deception in…

Heroes of Dominaria: A New Magic The Gathering Board Game…