By Jason Sansbury On Jul 25, 2016 Last updated May 5, 2021
Share TwitterReddItPinterestFacebookEmailPrint

When you look at current comic creators that appear to be reaching their peak, Jeff Lemire has to be one of the top on the list. After beginning his career making creator owned comics, Lemire had a stint in the DC New 52 era and now is working for Marvel, as one of the writers of several of the main titles.

His name came up during this week at San Diego Comic-Con as he is going to be one of the architects between this winter’s Marvel event, the battle between the X-men and the Inhumans. But he also released a creator owned book, Black Hammer, which tells the story of a superhero team that goes off the grid, living in a small town world after having saved the world from an epic threat. And Black Hammer reminded me of the setting and stories of some of Lemire’s earliest work, where he both wrote and drew: Tales from Essex County.

Essex County is one of those comics that everyone should at some point check out because it is a phenomenal example of what comics is fantastic at; it tells a moving story. And it is a decidedly non-superhero book.

The three volumes tell separate stories about living in the rural part of Canada, Essex County, which is southern Canada and shares a border with the metro Detroit area. The stories are all deeply moving in a different way. 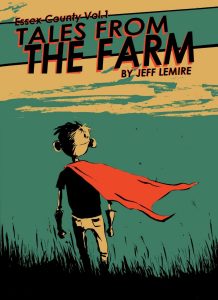 Volume 1, Tales from the Farm, follow Lester, a young boy who recently was orphaned and has to come live with his uncle Ken on his farm. The two of them have a hard time getting along and the story is about Lester adjusts, as he tells his stories that live in the heart of every boy, even ones who have lost his mom to cancer. It is a heartbreakingly good, as real family dynamics are explored in Lemire’s unique style in simple black and white art and the closing page is one of my favorite images of all time.

Volume 2, Ghost Stories, takes a character from Volume 1 and essentially gives a backstory. It is a story of two brothers but also about betrayal and the inability to forgive, both others and yourself. It is deeply rooted as well in hockey but doesn’t ever pull away from the work, just gives it a framework that we can all understand. The artwork feels a bit tighter in this volume, which is the longest of the three.

Volume 3, The County Nurse, follows Anne, as she visits and deals with her various patients across Essex County; again, we see some of the same characters, while also getting another backstory.

Essex County is one of the first books I picked up when I came back to comics after a long sabbatical. It is truly a great example of how comics are simply a device for great storytelling, no matter the genre.

Essex County feels like a well done independent movie, as it weaves in and out of the lives of the people of a real place that Lemire knows well, as Essex County, Canada is where he is from. The anthology obviously helped Lemire’s career, which has since shifted to him primarily being a writer, which saddens me to some degree. His art style is definitely unique but I find it to be haunting and one of my biggest regrets is not buying a page of the Essex County original art when I found it online for sale.

If you are looking for something other than superheroes and zombies, Essex County should definitely be something that you pick up. The anthology has been put together in one volume, which is readily available on Amazon, as well as available on Comixology for digital download.

Drop in on our Nerds on Earth 616 Facebook group, which is all about all things comics, and let us know what you’re favorite independent comic book is!

A Review of The Way of Kings, the First of the Stormlight Archive by Brandon Sanderson