There are so many Avengers titles, most of which seem to get relaunched or renumbered every time Tony Stark updates his Iron Man armor, we thought we’d do a “simple” guide to getting started in the Avengers canon.

Who are we kidding, there is NEVER anything simple when it comes to comics, so we’re omitting tons of mini-series, solo titles, spin-offs, and short lived Avengers series, because, c’mon, even understanding the main titles might cause the death of precious neural ganglia.

But let’s get started: The first volume of the Avengers debuted in September 1963 and lasted for over 400 issues, telling so many wonderful stories (like the Kree-Skrull War). 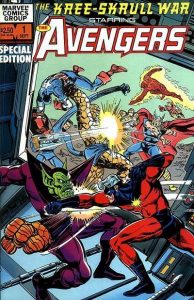 Along the way in 1984, the West Coast Avengers appeared as a mini-series that was turned into an ongoing that lasted until 1994, and featured Hawkeye as leader of the team.

The first volume of the Avengers ended with the “Heroes Reborn” event in Sept. 1996, which had the Avengers thrown into a pocket dimension of horrible costume design and disproportionate and distorted human anatomy.

This “Heroes Reborn” volume 2 of the Avegners mercilessly lasted only 13 issues (November 1996-November 1997). The less said about Avegners volume 2, the better.

Avengers volume 3 started in February 1998 when our heroes returned to the normal Marvel Universe with a near-classic lineup (with the spotlight now focused on the Scarlet Witch’s navel, which will be pertinent soon). 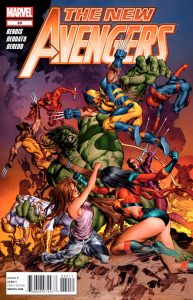 In September 2004, the series was renumbered starting with issue #500 to reflect the original volumes numbering, as if it was followed throughout all the volumes. However, this was the beginning of “Avengers Disassembled,” as the team and mansion were decimated by a mentally unstable Scarlet Witch (You connect those dots, fellow nerds). Hawkeye died during this run and the Internet hemorrhaged blood from their ears as a result.

Now the fun is about to begin as Spider-Man and Wolverine joined the Avengers. After soul searching by Cap and Iron Man, the first volume of New Avengers launched in January 2005, the same month that the original Avengers were said to be disbanding forever! (But it was a great series, so we’ll let it slide.)

This was followed by Young Avengers three months later, which lasted a year and told the story of a team of second-generation heroes, most notably Cassie Lang, AKA Stature, the daughter of Scott Lang, the 2nd Ant-Man.

Then the Civil War happened in 2006 and the New Avengers reemerged as an underground band of renegades fighting against superhero registration. And yes, Hawkeye was there, alive and well.

But the pro-registration forces, led by Iron Man, had their own team. The Mighty Avengers title started in May 2007, followed shortly thereafter by Avengers: The Initiative that detailed the training of young heroes.

After the Skrulls’ Secret Invasion ended in January 2009, the lineups of both the New and Mighty Avengers were shaken up, but both titles continued without even renumbering them. Meanwhile, Dark Avengers launched in March 2009, featuring Norman Osborn leading a team of evil Avenger doppelgängers. 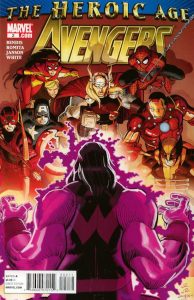 After Norman Osborn’s head-scratching Siege of Asgard in Summer 2010, all the Avengers titles–New, Mighty, Dark, and Initiative–ended. In this new Heroic Age, not only was the 2nd volume of New Avengers launched, but we also saw the 4th volume of Avengers as the classic title was revisited for the first time in 15 years.

Added to that was Secret Avengers (Steve Roger’s black ops team) and Avengers Academy (yet another young-heroes-in-training title).

Meanwhile, a little movie dropped around this time that was simply titled Avengers.

In October 2012 a new series, Uncanny Avengers, debuted, which paired Avengers with X-Men. This was part of the Marvel NOW! initiative, which is still current and still confusing, as I can’t tell which relaunched comics are supposed to be ‘now’, which are ‘then’, nor what is what.

Marvel Now! also launched Avengers volume 5, which was written by Jonathan Hickman. Hickman intricately linked 50+ issues of Avengers that required PhDs in astrophysics, linguistics, and narrative theory to fully understand, but those who stuck around were treated to a fitting conclusion in the crossover event Secret Wars.

Currently (2015-) we are being treated to the “All-New, All-Different” Avengers, written by Mark Waid. And even though it has been renumbered as a new #1, I don’t think Marvel is considering this volume 6, but who the heck knows?!?

A Guide to Getting Started with Avengers Comics

Whew. But where should a person start if they wanted to start reading some Avengers comics?

First, consider a Marvel Unlimited subscription. Marvel Unlimited lets you read the back catalogue of comics on your iPad, which is wonderful if you don’t need the most current 6 months or so.

Second, jump into the current Mark Waid comics. He’s a consistently wonderful comic writer and your local comic shop would have those issues easily on hand, I’d suspect (and the 1st trade is already collected).

Third, there are some collected editions that you can try and that I’ll link:

The Kree-Skrull War if you want some old school stuff that holds up. Here’s the whole thing in one volume.

New Avengers is an entertaining and solid modern take on the Avengers.

Hickman’s Avengers has depth and payout for those who are looking for a smart read they are willing to stick with.