No idea what the fuss about Secret Wars is? Well, those of you that have cash to pay the $4 x 9 issue cover price for the core Secret War series, plus shell out for the 44(!) Marvel Secret War tie-in series, you’ll want to skip this and read it for yourself. For the rest of you who are simply curious about what went down in Secret War, I will spoil it for you and give you the highlights. 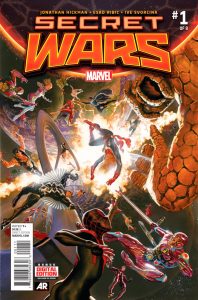 Secret Wars was a nine issue series of reality-bending universe colliding madness in the Marvel Universe. The end result was a big reboot that brought an All-New All-Different Marvel universe, where familiar characters and teams were flipped on their heads in new #1 books.

But want went down? Well, first a rewind. In 1984 Marvel released a now infamous Secret Wars event series that featured a “Battleworld.” The name and that content was really all Marvel brought forward for their 2015 Secret Wars event.

Then a couple years ago writer Jonathan Hickman began writing stories about the Illuminati in his New Avengers stories. Basically, Captain America, Tony Stark, Reed Richards, Namor, Doctor Strange, and Black Bolt were faced with a battle they couldn’t win, an event that resulted in various parts of alternate universes smashing into each other, destroying one or both of the universes in the process.

It gets crazier. Marvel’s greatest heroes sacrificed their moral code in order to do whatever it took to save their universe, going as far as wiping Captain America’s memories and actually destroying other universes in oder to save the main Marvel reality. But in the end, the main Marvel Universe, Earth-616, smashed into the Ultimate Marvel universe, known as Earth-1610, destroying both. 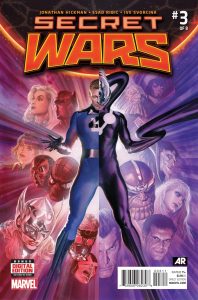 Meanwhile, as the heroes were sneaking around compromising their principles in their quest to save the world, Doctor Doom realized that the Beyonders, godlike beings who played a part in the creation of the universe, were the ones behind the destruction of the alternate realities. Doom, with the help of Doctor Strange and Molecule Man, managed to take some of the power from the Beyonders and used it to reforge the remaining shards of different universes into one single remaining world.

Here is where the tie-in titles worked. This allowed Marvel to recreate old Marvel events like Age of Ultron, E for Extinction, or X-Men Apocalypse. It all had a nostalgic flair, with a very modern vibe. There were 44 of these alternate reality miniseries, but we’ll come back to that.

Doctor Doom is a supervillain after all and now fancied himself a god, using the power to basically create a fantasy world for him to rule and play about in. The Battleworld was a mish-mash of different alternate worlds, smushed together into one. Different regions were populated by alternate versions of many heroes, with Doom the ultimate ruler and able to reshape reality at will.

First, Doom made Galactus his monkey, which was just fantastic. But then he got personal and creepy, erasing the memory of Reed Richards from the mind of Sue Storm and Richard’s children, Valeria and Franklin, and made them his own family. 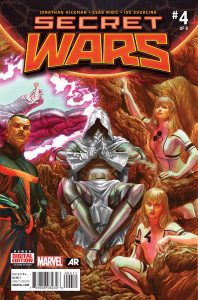 Further, Doom created the Thor Corps, an army of alternate universe Thors to police Battleworld, allowing him to rule for eight years, until the escape ships containing the survivors of the Ultimate and Marvel 616 universes arrived. They weren’t exactly stoked about Victor Von Doom being god.

Doctor Strange had spent the last eight years as Doom’s toady, but helped the heroes when they tried to overthrow Doom and scattered the heroes across Battleworld just before Doom snapped his neck. Then Doom tasked Valeria Richards, who still thought Doom was her father, to hunt the heroes down.

But the heroes were down, not out. They found pockets of resistance that were disgruntled with Doom’s rule and slowly built an army to back them up. And Black Panther got hold of the all-powerful Infinity Gauntlet, which was nice.

In the end Secret Wars had a quiet, intimate, fitting finale that boiled down to the decades-old feud between Doctor Doom and Reed Richards, who makes a desperate move to challenge Doom, reclaim his family, and redeem the existence of the universe. Life defeats death. Everyone lives. The end. 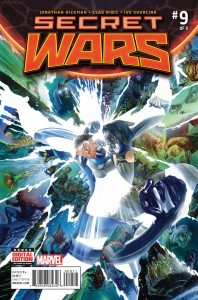 Secret Wars swallowed the Marvel Universe and spit it back out again. And it was immensely satisfying unlike many hyped-up crossover and big comic events. Secret Wars was on a giant scale, had parallels with DC’s Convergence and Crisis on Infinite Earths, the core 9-issue comics was plagued by delays, the line had confusing titles to keep track of, and yet the entire event was still incredibly satisfying in the end. If you weren’t a Marvel zombie going in, you were likely confused by the dozens of temporary titles. But that could work to your favor as those comics couldn’t really continue.

Secret Wars was designed to be a reboot of the Marvel comic universe, but in the interim, those alternate reality comics provided a nice way to catch some short-term wacky stories and have a little fun with it. Comic readers could pick and choose, simply reading a few that look interesting to them, having no pressure to keep up with continuity. I encourage you to check out a few.

Secret Wars relaunched the Marvel Universe (All-New! All-Different!), made it possible for Miles Morales to have a legitimate place at Marvel with the merge of the Ultimate universe with the 616, and took the Fantastic Four out of play in a fitting way. Take a look at the collected version of Secret War.