A Review of The Way of Kings, the First of the Stormlight Archive by Brandon Sanderson

I’ve a confession to make:

For two years, I’ve let two books intimidate me. Both of them are in excess of 1,000 pages and sport what I’m pretty sure is a font size of .25 (maybe a little exaggeration here). I knew they would demand a lot of my time, and I was sinking a lot of time into other new avenues of entertainment and hobby so I wasn’t sure I could commit.

Then a nine-year-old girl who loves books came into my office at work and shared her love of a large book with me. It was over 200 pages! I was super proud of her for tackling what turned out to be a series of books that long at her age with gusto. I love it when I can nerd out about reading with younger children, so I told her that I had a couple of books at home that were over 1,000 pages long and she said she’d like to see them.

And, of course, when I brought them in the next day she was all, “Whoah!  Are you reading these?!”

I had to say yes! Which was only a lie until I got off work that evening and opened Brandon Sanderson’s The Way of Kings. And, man, am I kicking myself for not reading it sooner.

(By the way: the second book is David Foster Wallace’s Infinite Jest.)

Review of The Way of Kings

Weighing in at north 1,200 pages but reading much more quickly than you’d think, The Way of Kings is the first in what is called The Stormlight Archive series (currently two books strong but slated – I think – for five), and it hits the ground absolutely running.

The book rotates amongst the points of view of four major characters (along with maybe half a dozen other characters of varying prominence):

As the story unfolds, we find Alekthar at war with the Parshendi for assassinating Elhokar’s father (the then king, Gavilar). Much of the story – particularly most of Kalladin’s and Dalinar’s chapters – are set in the war camps or on the field of battle.

The camps are rife with politicking and power grabs amongst the high princes who serve the king, and the battlefield is continually littered with the bodies of Parshendi and Alethi alike. Kalladin is just trying to survive what seem to be recurring suicide missions and is told by a fellow bridge runner of an ancient and legendary power that may well be his gift; Dalinar is struggling with his visions and what they might mean not just for the war, but for the world; and Shallan discovers a major secret of Jasnah’s and a purpose-altering truth about herself.

What The Way of Kings Does Best 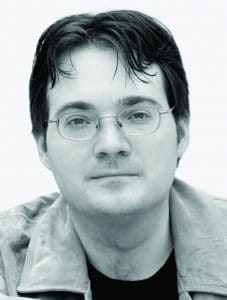 What appears to be legend slowly comes to bear upon reality through Shallan and Jasnah’s studies, Dalinar’s visions, and Kalladin’s experience. The world teeters on a precipice that promises destruction, and yet the power and knowledge required to stave the breaking of the world off begin to pierce their way into the world like rays of sun through a thunderhead.

Each of them holds their gifts as secrets even by the end of the book; none completely sure what they are exactly.

The spren I mentioned above seem like little more than a cool fantasy element to the setting until one of them (Syl) speaks.  Usually the spren are visible to all and circumstantial:

So what of Syl?  She’s a wind spren unlike any other and purports more than she seems.

The characters’ stories are interwoven, as well, and will only become even more so as the narrative progresses both within the pages of this volume and most certainly in those that come after it.

You’ll get sucked into the world and its rules quickly and inextricably.

I had this to say to Sanderson upon completing the book, and I stand by it: 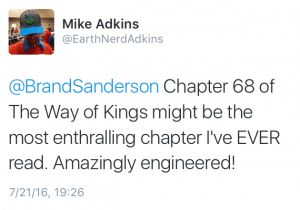 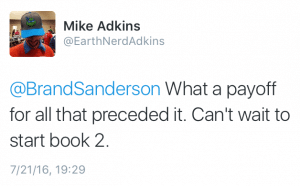 To which Sanderson responded, 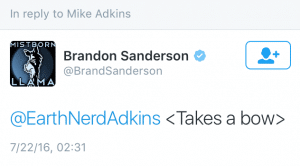 But Don’t Take My Word For It

Just take a look at what Kingkiller Chronicles author Patrick Rothfuss and nerdlebrity Felicia Day had to say about Sanderson’s novel: 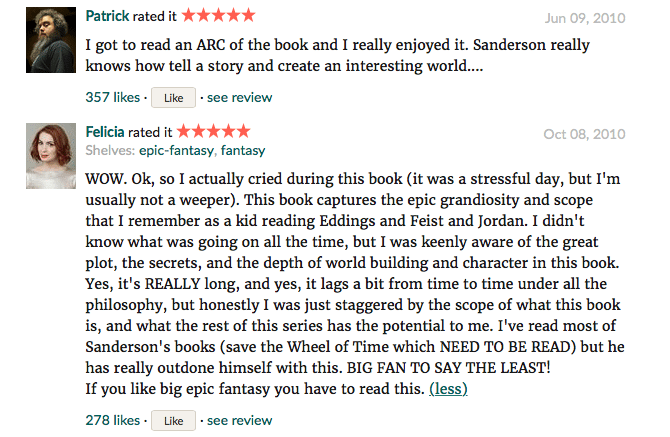 If you like big epic fantasy you have to read this.

You can buy The Way of Kings on Amazon here, as well as its sequel – Words of Radiance.