Let me start with a provocative thought: we needed a new era of Captain America.

As much as I could be talking about the widely disparaged Secret Empire run that Nick Spencer just concluded, in which, surprise, it turns out Captain America was ALWAYS a Hydra Agent (Well, until he wasn’t, because, you know, comics!) it is hard to not talk about Captain America in terms of the current political climate in the United States.

It wouldn’t be a reach to say that this is among the divisive times in our nation’s history. And as soon as I were to call out one side of an argument or another, our Facebook comments would blow up and people would be calling for me to be fired and I don’t want to do that to Clave.

Instead, I want to talk about why we need a new Captain America era and why Marvel has tapped the right person to bring us that story.

Captain America #1: Loyal to the Dream 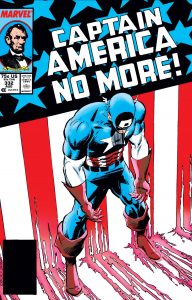 And today should be no different. When a country is as fractured as our is, to have the symbol of the country sit on the sideline and not talk about the current state of things would be a mistake. But in our changing cultural climate, Captain America needs a new voice and to offer new eyes. It turns out, Marvel had someone that could be up for the job already writing for them. 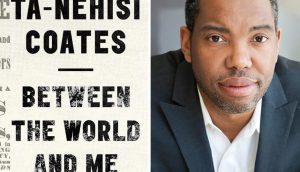 Ta-Nehisi Coates is an author, journalist, and educator who became most famous through his work writing for The Atlantic. He writes on many topics but primarily on race in America.

Personally, one of the more challenging books I’ve read were Coates’ collection of essays Between the World and Me, written to his son and expounding on issues of race and class in America and the world.

But, Coates has also been a die-hard Marvel comics fan. I remember being astonished when I saw him go on a rift with someone in an interview for 5 minutes on some Marvel Comics stories that made me go “That guys is the real deal!”

Eventually, possibly through enough interviews or connections, Marvel realized an opportunity and hired Coates to reboot Black Panther, knowing that they had a feature film centered on the character in the works.

From the get go, Coates demonstrated an understanding of Marvel, its history and nuisances but it was clear that becoming a comic book writer is something that takes some different muscles. I stuck with it and I am glad I did, as I really enjoy the places that his Black Panther story has gone. But, without a doubt, that experience will help him as he takes on the iconic Captain America.

Captain America #1: Loyal to the Dream 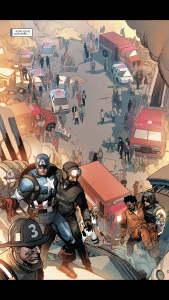 Captain America #1 came out last week and it was a great story to be able to jump on as Coates and artist Leinil Francis Yu tell a great set up story. The story is of Captain America and the Winter Soldier confronting a group of modern day terrorists in Washington DC and it evokes an older Marvel story.

In Daredevil 232-233, Kingpin hires a man named Nuke to go after Daredevil; Nuke is a bio-enhanced soldier that served in Vietnam and later in other conflicts but the improvements have had an impact on his mind and he must ingest a series of red, white and blue pills.

He is marked mainly by a tattoo on his face of the American flag. Captain America becomes involved in the scenario and see Nuke as a soldier who at one point had a good heart. Nuke is gravely wounded after the government turns on him and he dies after Captain America fights off a squad of soldiers while Daredevil escapes, trying to get him to safety. 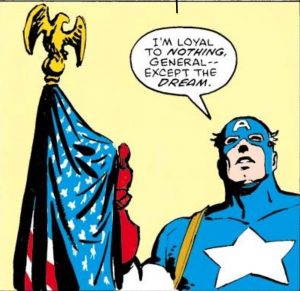 Coates clearly is drawn into the Captain America mythos and that story in particular. In fact, early on in the new issue, Coates repeats an iconic line from the Daredevil story, where Captain America asserts that the only thing he is loyal to, “is the dream.”

From there, we see some other pieces fall into place as Bucky still acts as the assassin, not a surprise as Coates references Ed Brubaker’s Winter Soldier story as one of his favorite Cap storylines.

Sharon Carter is there as well, though old compared to Steve, having been aged somehow in Secret Empire and she winds up being recruited for a new group, while Steve is left on the outside; his most recent public image as being involved in Hydra is a liability.

Throw in the setting up of Selene, the vampiric X-men villain as being a potential major villain in this first storyline and I am definitely hooked.

Steve Rogers is one of my favorite characters, in part because his values and his beliefs seem both archaic and old but also as something we desperately need to be reminded of. Coates has the potential to remind us of all that and also help us maybe find those things in ourselves and in our communities again.