By Jason Sansbury On May 5, 2016 Last updated May 5, 2016
Share TwitterReddItPinterestFacebookEmailPrint

Steve Rogers is the epitome of what we want in our superhero stories: a good man, weakened by his bad genetics who was able and willing to risk himself and his health in order to become something more. And make no mistake, Captain America was created as an icon.

The infamous cover that shows him punching Hitler in the face was printed before America was even a participant in World War II. From his inception, Captain America was meant to be an icon, a reminder of all that is good about America. And in the case of World War II, it was easy to let Captain America be the icon that everyone rallied around, sure of the goodness of the cause that we all were fighting together.

So when Captain America was “unfrozen” in one of the earliest adventures of the Avengers, he came into a different world. Sure, it was easy to look at the ways technology changed and how Steve Rogers was a literal man out of time.

But what wasn’t so obvious is that while Captain America may still be an icon, America and the people’s trust of her was fading. Quickly. Even a brief look at history shows that the 1960s and 1970s were a time of social upheaval and tumult. More people were unsure of America and what America stood for and that shift is potentially very challenging to a man who wears the flag.

One of the ways that the writers of that era adjusted Captain America was to give him a sidekick that had a different perspective. While the Green Lantern and Green Arrow stories of that era are more famous, Sam Wilson aka the Falcon served as a teacher to Steve Rogers, showing him places where the American dream had been misconstrued and become an American nightmare. Steve proved willing to learn, to listen and to adjust.

But on two major occasions, Steve Rogers did what he felt like was necessary: to quit being the icon. 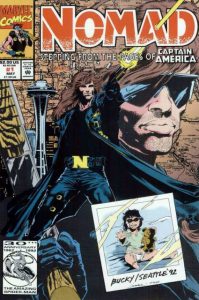 In the 1970s, in the real life American political landscape, scandal was in the process of tearing down a major political figure; President Richard Nixon would soon resign in disgrace. And for the young writers of Captain America, they played up the storyline, literally making the president of the Marvel America a major villain in a backstory.

The end result? Captain America quit being Captain America. He took on the name Nomad and a new costume. While the change didn’t last long, it served to echo what many in America thought might be true: America wasn’t worthy of an icon anymore. It was too twisted, manipulated past what she could have been and the nobility of Captain America was lost in the scars of that political landscape. [You can check out that run here.] 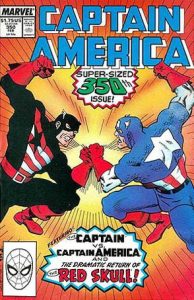 In the early 1990s, again, scandal was plaguing politics, this time in the form of the Iran Contra scandal, where America was basically laundering money from a bad source to fund a revolutionary army in its backyard of Latin America. While it didn’t have the punch of Watergate, it did have the attention of the writers of Captain America.

Even more so than walking away from the icon, the American government asserted that it owned the icon, the shield, the costume, all of it and if Steve Rogers didn’t want to be their “yes” man, then he could walk away. Thus, Steve Rogers became the Captain, adopting a black and red motif that I still think was legitimately a very cool costume. While obviously inspired by the infamous black Spider-Man costume, the new Rogers look allowed him to still be a hero, even with a replacement shield, while a drug fueled Georgia soldier named John Walker took on the mantle of Captain America, disgracing the icon, before eventually Rogers claimed it again, restoring the order.

Captain America is an icon and Steve Rogers is the man responsible. Certainly, the earliest adventure of Captain America were seen as pure, righteous battles, even though the retcons have changed some of that. (A young Bucky being the wet work guy to Roger’s clean-handed Captain America in Brubaker’s run is heart breaking in many ways.)

But Captain America also has had the moments of wanting and maybe even needing to distance himself from America and her flaws to stand up for something better. What was unthinkable needed to become a reality: America isn’t worth an icon sometimes and instead needs to pause and consider what is happening and would happen to her. And, usually, Steve Rogers is leading the way to that reflection.

Who has Been Captain America Other than Steve Rogers?